Peterson's double-double leads No. 21 USC past No. 12 UCLA 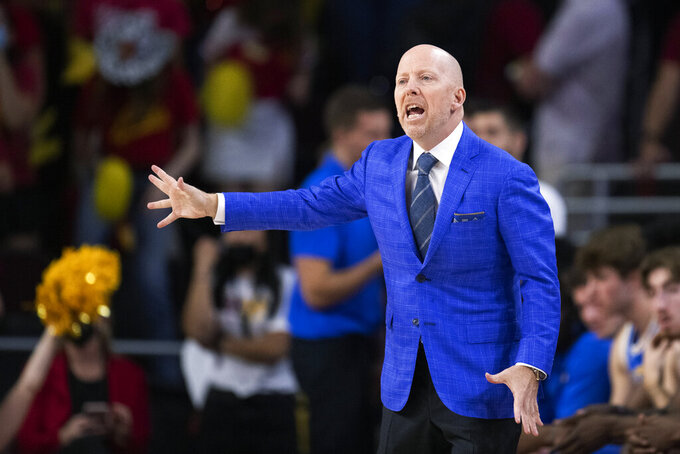 LOS ANGELES (AP) — Drew Peterson considered himself a defensive liability for most of his college career at Southern California. His confidence on offense had been shaken in the past week by two poor performances.

Peterson shook off those doubts and asserted himself at both ends of the court Saturday night, guiding the No. 21 Trojans to a memorable rivalry win.

Peterson had his first double-double of the season with a career-high 27 points and 12 rebounds, and USC defeated No. 12 UCLA 67-64.

“I go against Drew every day in practice. Last year, when I came early, I had to watch him play so I already knew Drew was a good player. But, tonight, he really good,” freshman guard Reese Dixon-Waters said.

Peterson also had five blocks and four assists as the Trojans picked up their fifth straight rivalry win despite being without leading scorer Isaiah Mobley for the second straight game because of concussion-like symptoms.

The Trojans (21-5, 10-5 Pac-12) found out earlier in the day that Mobley would be out again after breaking his nose in a loss at No. 4 Arizona last Saturday. Peterson knew he had to step up in Mobley’s absence, and he was able to finally put to rest his poor offensive showing in a loss to the Wildcats.

“I was, I think, 1 of 13 in the Arizona game, and I was passing up 3’s the other day against Pacific, but my coaches and teammates trust me to shoot. Fortunately, I was knocking them down tonight and I was feeling really confident, and that’s something I had to work through,” Peterson said.

Peterson was arguably more impressive on defense, leading the way as USC combined length and effort on the defensive end to smother UCLA (17-5, 9-4) into poor shooting. The Trojans had 10 blocks and seven steals, with Petersen even chipping in one of the latter.

“I’d almost consider myself a liability the last few years defensively, and I really made sure ’cause the coaches kept telling me you’ve got it in you and you’re athletic enough to do it, and I really made it a mission to try and play better defense this year,” Peterson said.

Dixon-Waters and Chevez Goodwin each added 10 points for USC.

The Bruins nearly forced overtime with a late push in the final 41 seconds after being down by eight points. But Tyga Campbell’s desperation 3-pointer went off the back of the rim as time expired, allowing the boisterous crowd at Galen Center to rush the court, which included the largest student section to attend a game since its opening in 2006.

“The way we’re playing, I don’t know why anyone would storm the court for beating us,” UCLA coach Mick Cronin said.

Campbell was the only player in double figures for UCLA, scoring 27 points, with 13 coming from the free-throw line. Johnny Juzang scored 12 points for UCLA. Jaime Jaquez Jr. had five points on 2-of-11 shooting, with Cronin attributing the poor outing to an ankle injury.

Despite his teammates making just 13-of-51 shots from the field (25.5%), Campbell still nearly dragged the Bruins to overtime.

“The whole time I was just worried about winning and keeping us in the game and doing what coach needed us to do,” Campbell said. “It was a tough one, all credit to USC, but we got to be on to the next one.”

UCLA: The Bruins’ hopes of winning the Pac-12 are all but over after another loss to their crosstown rival. Coming off an appearance in the Final Four, they can still accomplish big things in the postseason, but salvaging a split with USC at home on March 5 might be the best UCLA can do in the regular season this year with the Wildcats well out in front.

USC: With Mobley out, Peterson stepped up. His shooting from behind the arc helped get the offense going to start the game. Even more impressive was his willingness to get nasty, swatting away good looks around the rim and picking up key rebounds. If Peterson continued that sort of play, the Trojans might be able to make another deep run in the NCAA Tournament.

The Bruins will slip and Trojans should rise in the next Top 25, as the two schools always seem to find themselves linked. However, a better overall resume for UCLA might enough to keep them ahead of USC.

With the Super Bowl set for Sunday in Inglewood, California, plenty of Trojan football alumni were at the game. The most prominent were offensive lineman Tony Boselli, whose election into the Pro Football Hall of Fame was announced on Thursday, and Anthony Munoz. Wide receiver Drake London, a likely first-round draft pick, sat courtside next to record-setting quarterback Matt Barkley, while new signal-caller Caleb Williams watched from the student section after following new coach Lincoln Riley west from Oklahoma.