Petras' no-picks streak on line in No. 5 Iowa's game vs Rams 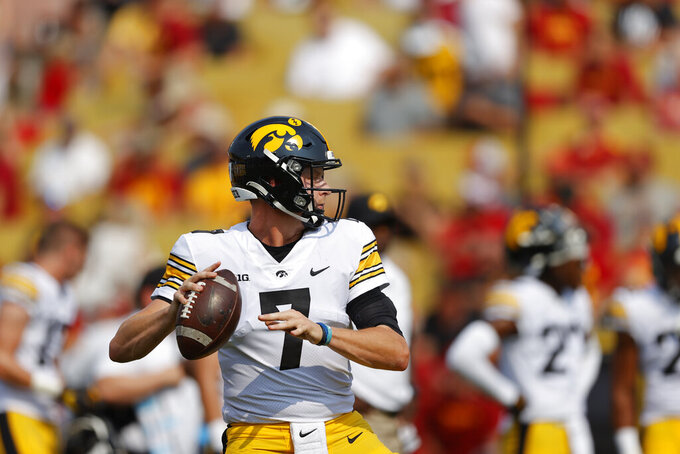 One number pops out, though, and illustrates a major reason the fifth-ranked Hawkeyes (3-0) have won nine straight games.

The second-year starter hasn’t thrown an interception since early in the second quarter of the Nov. 27 game against Nebraska, a streak of 22 quarters entering Saturday's final nonconference game against Colorado State (1-2).

While Petras said he would like to improve on his completion percentage, he knows the more meaningful stat is his 154 consecutive passes without getting picked off.

“That’s probably the No. 1 job,” Petras said. “I think our number now is like 98% chance if we don’t turn the ball over on offense, we win the game at Iowa. Not turning the ball over is huge.”

“There were a couple throws — I’m sure he would tell you the same thing — that you’ve got to make that throw,” Ferentz said. “That’s the next step. But that’ll come.”

This is the first matchup between Iowa and Colorado State but not the first time Rams coach Steve Addazio has gone against the Hawkeyes. Addazio's Boston College team faced Iowa in the 2017 Pinstripe Bowl, a 27-20 win for the Hawkeyes.

Addazio said he admires the consistency Iowa has shown in Ferentz's 23 seasons.

“It’s not flashy. It's not gadgety,” Addazio said. “No one talks about Iowa and says, ‘Oh, they’re geniuses.’ Because there are no geniuses. These are just really good ball coaches.

"They play a really tough, physical brand of football. And they’re really good, really consistent. Twenty-three years in this business? Twenty-three? They know exactly who they are. To me, that’s the genius.”

Iowa offensive lineman Kyler Schott returned from injury last week and played a limited role against Kent State. Schott was No. 1 on the depth chart at right guard in the summer. He broke his foot in a farm accident and missed the first two games.

“It’s going to take a while to get him back where he can play a full game, but it’s good to have him in the mix,” Ferentz said.

Addazio is impressed with Iowa’s defense, which has forced eight turnovers and scored three touchdowns. Colorado State has turned the ball over four times.

“We call it ‘football heaven’ and ‘football hell,’ the way you hold the ball,” Addazio said. “This is a team that has had a bunch of defensive touchdowns. They’re a really consistent defense. That’s why I say we need to play a clean game. This is a defense that will take the ball away.”

Iowa has had a tradition of producing great tight ends, but Colorado State might have the best one on the field in Trey McBride. The senior leads the Rams with 30 receptions for 339 yards and a touchdown, and is ranked as one of the best players at his position by NFL scouts.

“He’s a really good blocker. He’s a big physical guy, but also a really good runner, too,” Ferentz said. "And they’re going to make sure he gets the ball, which, that is good coaching.”

Iowa, with nine straight wins, is on its longest streak since opening 2015 with 12 victories. The Hawkeyes also have won 14 consecutive nonconference games.