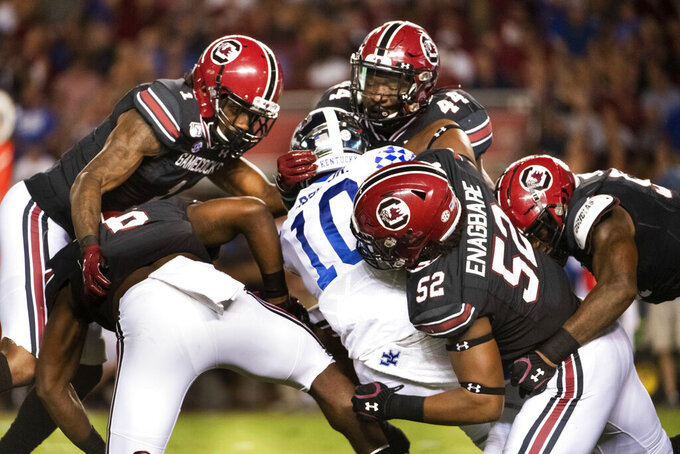 FILE - South Carolina defensive lineman Kingsley Enagbare (52), Sherrod Greene (44), Jaycee Horn (1) and T.J. Brunson (6) tackle Kentucky running back Asim Rose (10) during the second half of an NCAA college football game in Columbia, S.C. , in this Saturday, Sept. 28, 2019, file photo. Enagbare broke out in a big way for a Gamecocks team that went 2-8 in 2020, and he should thrive on the edge in new defensive coordinator Clayton White’s 4-2-5 base alignment. (AP Photo/Sean Rayford, File)

Elite talent is spread across college football, and some of the top players at their positions are on teams that struggle.

Consider this: five players on The Associated Press All-America first or second teams were at schools with losing records.

In that spirit, let's take a look at some great players on not-so-great teams:

With his knack for making the difficult catches as well as the easy ones, Bell is among the most dependable receivers in the country. He started all six games as the Boilermakers went 2-4 in their pandemic-shortened season, and he finished with 53 catches for 625 yards and eight touchdowns. He had four 100-yard receiving games and made a season-high 13 catches for 121 yards and three TDs against Iowa.

Enagbare broke out in a big way for a Gamecocks team that went 2-8 in 2020, and he should thrive on the edge in new defensive coordinator Clayton White’s 4-2-5 base alignment. Engabare recorded two sacks and a career-high nine tackles in the opener against Tennessee and finished with a team-best six sacks and three forced fumbles in eight games. He missed the last two games because of injury and is coming off hip surgery in the offseason.

One of the most versatile players in the country and a preseason All-ACC pick, he had 968 all-purpose yards and seven touchdowns while playing in only seven games because of injury for the 3-7 Yellow Jackets. He became the seventh Power Five player since 2000 to compile 450 rushing yards, 300 receiving yards and 200 kickoff return yards in a team’s first eight games of a season.

Lucas excelled in Mike Leach’s “Air Raid” system and was expected to declare for the NFL draft after the Cougars played only four games (1-3) last season in Nick Rolovich’s run-and-shoot offense. The 6-foot-7, 319-pounder said he didn't think he was quite ready to go pro. Already one of the best pass protectors in the country, Lucas will add to his game with another year in an offense featuring more runs and tighter line splits.

Martial is the preseason defensive player of the year in the Sun Belt Conference after making a nation-leading 113 tackles for a team that finished 5-6. He showed up as a walk-on and has made a rapid ascent. He made 21 tackles and a late interception in a narrow loss to conference champion Coastal Carolina, and he enters the season as Pro Football Focus' No. 3 college linebacker.

Pitre is listed as a safety but actually is a safety-linebacker hybrid. He can be a rush end, a true linebacker or a high safety. He led the Bears with 60 tackles and 13 for loss during a 2-7 season. Among his TFLs were 2.5 sacks. He also ran back both of his interceptions for touchdowns, including a 30-yarder in a closer-than-expected loss at Iowa State. Pro scouts love his high motor and football IQ.