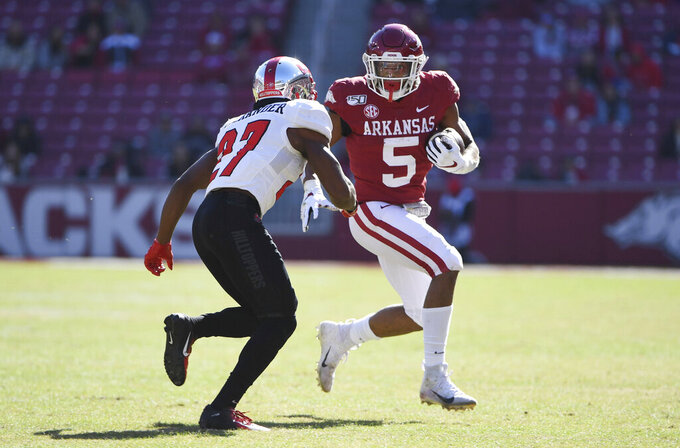 FILE - In this Nov. 9, 2019, file photo, Arkansas running back Rakeem Boyd carries against Western Kentucky during the second half of an NCAA college football game in Fayetteville, Ark. After a promising 2018, Boyd was a breakout star in the Southeastern Conference with 1,133 yards rushing and eight touchdowns last season. (AP Photo/Michael Woods, File) 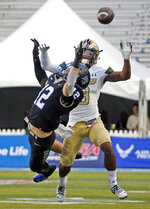 All-Americans and college football award winners are overwhelmingly chosen from teams with the winning records.

Makes sense, of course. Good teams have the most good players and — as the saying goes — to the winner goes the spoils.

The good players on the not-so-good teams tend to get lost in the shuffle, overlooked through no fault of their own.

Six players who will stand out even if their teams don't turn it around in 2020 after having losing records in 2019:.

Boyd is a former “Last Chance U” star who went from junior college to Arkansas. After a promising 2018, Boyd was a breakout star in the Southeastern Conference with 1,133 yards rushing and eight touchdowns last season. The production was remarkable considering how inept the Razorbacks were in the passing game. It's unlikely this will be a quick turnaround for new coach Sam Pittman, but the former offensive line coach does have a star back in Boyd to lean on.

The fourth-year junior speed rusher was overlooked in an Atlantic Coast Conference with lots of good defensive ends last year. His 13.5 tackles for loss and 6.5 sacks were only good enough for third-team all-ACC. It should be another strong year along the defensive line in the conference, but the 6-foot-4, 235-pound Rumph has a chance to be the most productive of the bunch.

Can't truly call Stills underrated after he was named Big 12 preseason defensive player of the year. He had 14.5 tackles for loss and seven sacks last year, helping a rebuilding team put a up respectable five victories. At 6-1, 285, he isn't the typical hulking nose guard, but few linemen in the country are tougher to block.

Williams' first two seasons with the Jayhawks have produced 2,186 yards rushing at 6.0 yards per carry and 10 touchdowns. And just six victories. With only one nonconference game this season, it's doubtful Kansas will crawl out of the Big 12 cellar, but Williams should give opposing defenses headaches.

A season-ending ankle injury limited Blankenship to seven games last season and he was still second-team all-Conference USA. His loss was part of a disappointing season for the Blue Raiders, who failed to get bowl eligible for the first time since 2014. The 6-foot-1, 200-pound senior has NFL potential if he can replicate his sophomore year, when he had 107 tackles, eight for loss and four interceptions.

Jackson led the Sun Belt in sacks last year with 10 and returns for his senior season as a contender to be the conference defensive player of the year. The Chanticleers have had three losing seasons since moving to FBS, but they will look to breakthrough behind Jackson.