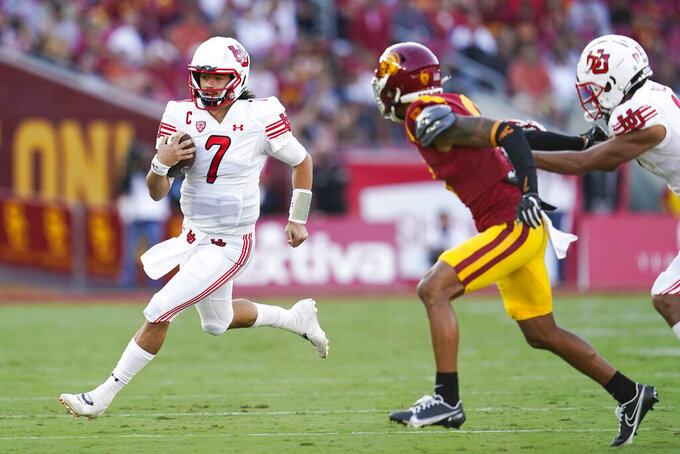 The college football schedule offers a weekly selection of marquee games between top teams, and some will hit the ground running fast this year.

Two Sept. 3 showdowns could shuffle the preseason AP Top 25 quickly as No. 5 Notre Dame, with new coach Marcus Freeman, visits No. 2 Ohio State, and No. 3 Georgia — the defending national champion — plays No. 11 Oregon in Atlanta.

Reaching across Power Five lines for these matchups seems to have escalated in recent years, but then long-held bitter rivalries take over later in the season as teams grapple for championships and bowl positioning. Here are just six of the tantalizing games on tap this season:

Freeman's debut against his alma mater will set the tone for both teams, of course, and it will see Heisman Trophy candidate C.J. Stroud under center for the Buckeyes. There will be nine preseason AP All-Americans on the field between the two teams. A bit of added intrigue: High school star edge rusher Keon Keeley could be among the 103,000 or so fans in attendance. Keeley previously committed to the Irish, then decommitted after the coaching change. The Buckeyes and No. 1 Alabama are among the teams vying to bring him into their five-star fold.

The Bulldogs lost five first-round NFL draft choices from last year's team on defense, but they get QB Stetson Bennett back, potentially adding to his remarkable story as a former walk-on who was the MVP in a national championship game victory. The Bulldogs' tendencies, though, are well known by former defensive coordinator Dan Lanning, who will be making his debut as the Ducks' coach after Mario Cristobal left to take the job at Miami.

Last year, the Wolfpack ended an eight-game slide against the Tigers by prevailing 27-21 in double overtime. N.C. State held Clemson to just 214 yards, its lowest total of the season, and the loss eventually helped allow Wake Forest to end the Tigers' six-year stranglehold on the ACC's Atlantic Division title. The Wolfpack has 10 defensive starters back, so Clemson has its work cut out. The programs are picked to finish 1-2 in the division, with Clemson first.

This SEC West showdown might as well be called the “Beef Bowl" after the spicy offseason comments over recruiting between Aggies coach Jimbo Fisher and Crimson Tide coach Nick Saban. More important, this could be the deciding game in the division race. The coaches say they've buried the hatchet, but the winner may give it a twist. Texas A&M last won the national championship in 1939; the Crimson Tide has six with Saban alone.

The Trojans' ranking is likely more a tip of the cap to new coach Lincoln Riley after a 4-8 finish last season. Riley used the transfer portal hoping to rebuild the program quickly, bringing in 24 new players. The Utes are intent on seeing returning QB Cam Rising continue to push their ascent after their first Pac-12 title and Rose Bowl appearance. How quickly Riley's new systems take hold will be huge for USC.

The Cowboys return 10 offensive starters, including QB Spencer Sanders, to a team that came within an eyelash of the playoff last season. Defense has always seemed a strength and should remain so with Derek Mason taking over as coordinator for Jim Knowles, who took the same spot at Ohio State. The Sooners had their six-year grip on Big 12 titles end last season thanks to a loss to the Cowboys. They hope former Clemson defensive coordinator Brent Venables can get them back on top behind QB Dillon Gabriel, who passed for more than 8,000 yards and 70 touchdowns at Central Florida.