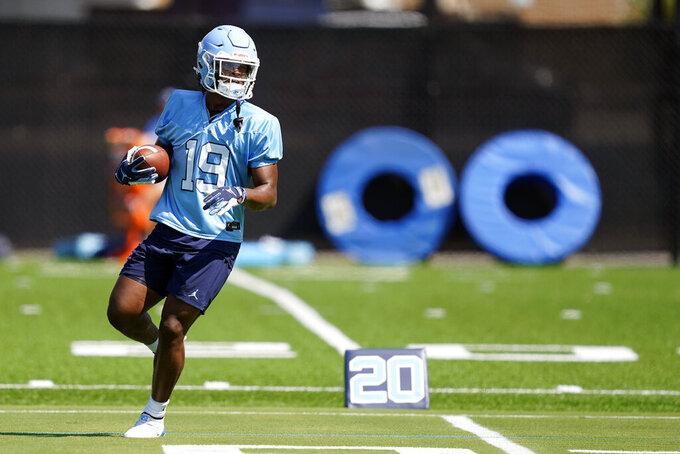 Tennessee hasn’t finished a season ranked higher than 22nd since 2007, yet there still figures to be a heavy Volunteer flavor to the playoff picture this year.

Or to put it more accurately, an ex-Volunteer flavor.

While the transfer portal was particularly active during the most recent offseason, no team lost more star power than Tennessee, which fired coach Jeremy Pruitt in January when school officials said an internal investigation found serious NCAA violations.

But the Tennessee presence is most notable at No. 2 Oklahoma. The Sooners have three former Vols in running back Eric Gray, defensive back Key Lawrence and offensive tackle Wanya Morris.

There are a number of transfers who should make an impact this season and it's no surprise this list features a couple of former Tennessee players:

Coan already has been named the starting quarterback for No. 9 Notre Dame’s Sept. 5 season opener at Florida State. Coan made 18 starts for Wisconsin from 2018-19, but he injured his right foot before the 2020 season and never played for the Badgers again with Graham Mertz taking over the job. Coan completed 69.6% of his passes for 2,727 yards with 18 touchdowns and five interceptions in 2019 while helping Wisconsin reach the Big Ten championship game and Rose Bowl. Coan will get a chance to face his former team Sept. 25, when the Fighting Irish face No. 12 Wisconsin at Chicago’s Soldier Field.

Gray rushed for 772 yards and also caught 30 passes for 254 yards in nine games last season. He rushed for 539 yards as a freshman in 2019. He closed the 2019 season by rushing for 246 yards against Vanderbilt and gaining 120 all-purpose yards and scoring the winning touchdown against Indiana in the Gator Bowl. He was named the most valuable player of the Gator Bowl. Gray should form a quality running back tandem with Oklahoma’s Kennedy Brooks, who rushed for over 1,000 yards in back-to-back years in 2018 and 2019 before opting out of the 2020 season.

Levis will be the starting quarterback for Kentucky’s Sept. 4 season opener with Louisiana-Monroe. Levis appeared in 15 games for Penn State and went 61 of 102 for 644 yards with three touchdowns and two interceptions. Kentucky might not be the only SEC East team handing its starting quarterback job to someone who arrived by transfer this offseason. Tennessee’s quarterback competition includes Michigan transfer Joe Milton and Virginia Tech transfer Hendon Hooker, as well as Harrison Bailey.

Milton is a two-time American Athletic Conference offensive player of the year who finished eighth in the Heisman Trophy balloting in 2017 and sixth in 2018, but he suffered ligament, nerve and artery damage to his knee in November 2018 and hasn’t played in a game since. Milton, who won his last 24 starts at UCF, now is attempting a comeback with Florida State and competing with Jordan Travis for the right to open the season as the Seminoles’ starting quarterback.

Smith was a third-team Associated Press All-America selection for West Virginia last season. He had 61 tackles – eight for loss – and two interceptions in 10 games. Smith also had 53 tackles and two interceptions as a freshman in 2019. Smith will be part of a Georgia secondary that also includes Clemson transfer Derion Kendrick.

To’o To’o was a two-year starter at Tennessee who recorded a team-high 76 tackles last season. He also had 10 tackles for loss. He had 72 tackles as a freshman in 2019. Alabama coach Nick Saban says To’o To’o has benefited from his familiarity with the system after playing at Tennessee for Pruitt, a former Alabama defensive coordinator.