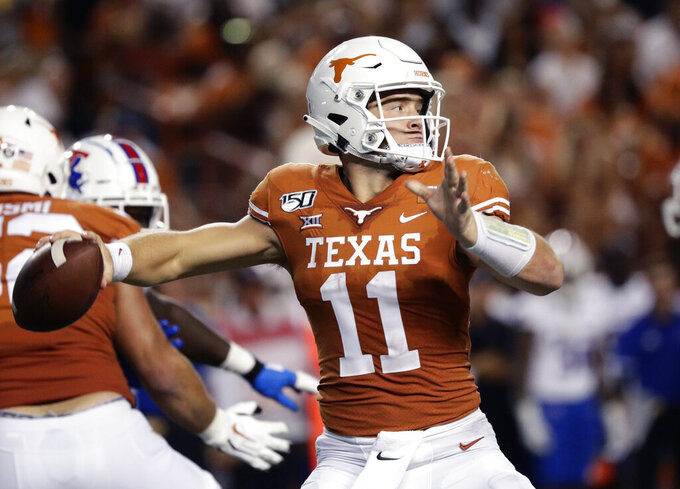 Each position has its own hardware and multiple players of the year are chosen, including by The Associated Press.

As with everything related to college football in a season already disrupted by the pandemic there is uncertainty about when the awards will be ... awarded. It usually happens in mid-December.

For now, we will work under the assumption that only players on teams competing in the traditional window for football season will be considered for the sports' most prestigious awards. That could change. Maybe there should be two Heisman trophies this year?

So, here are some projections for the finalist and winners for some of the most notable college football awards (plus, the top contenders whose seasons aren't scheduled to start in September):

Sam Ehlinger, QB, Texas. Ehlinger has more than a little Tim Tebow in his game. Does this mean the Longhorns will be back?

Najee Harris, RB, Alabama. Since 2006, the Heisman has gone to two categories of players: Quarterbacks and Alabama running backs.

Trevor Lawrence, QB, Clemson. The face of college football needs to make at least of trip to New York for the Heisman hand out before he is banished to the Jacksonville Jaguars.

Who's missing? Ohio State quarterback Justin Fields would have been the favorite.

The winner will be: Lawrence.

Dylan Moses, LB, Alabama. Back from injury to tighten up the Tide's run defense.

Jalean Phillips, DE, Miami. An off-the-board pick. Phillips is a former five-star recruit and transfer from UCLA who is primed to break out as a senior.

Marvin Wilson, DT, Florida State. A force inside for the rebuilding Seminoles.

Who's missing? Oregon defensive end Kayvon Thibodeaux, just a sophomore, is a game-wrecker.

The winner will be: Wilson.

Defensive linemen are eligible for the Outland, but because the o-linemen don't get much love, we will focus on them:

Alex Leatherwood, OT, Alabama. The next in a long line of Crimson Tide tackles to become a first-round draft pick.

Creed Humphrey, C, Oklahoma. Anchors what should be another potent Sooners offense.

The winner will be: Smith.

Dyami Brown, North Carolina. One of two dynamic receivers in Chapel Hill, along with Dazz Newsome.

The winner will be: Pickens.

Travis Etienne, Clemson. It was a shocker that Etienne returned to Clemson after averaging more than 7.0 yards per carry in each of his first three seasons.

Harris, Alabama. Maybe the best all-around back in the country.

Chuba Hubbard, Oklahoma State. Another surprising returnee after a 2,000-yard season in 2019.

Who is missing? Buffalo's Jaret Patterson is coming off a 1,799-yard season for a team that likes to play power football.

The winner will be: Harris.

Moses, Alabama. The Tide has had three Butkus winners since 2009.

Nick Bolton, Missouri. Underrated last year, Bolton gets the credit he deserves in 2020.

Who's missing? Oregon State's Hamilcar Rashed led the nation with 22.5 tackles for loss in 2019.

The winner will be: Moses.