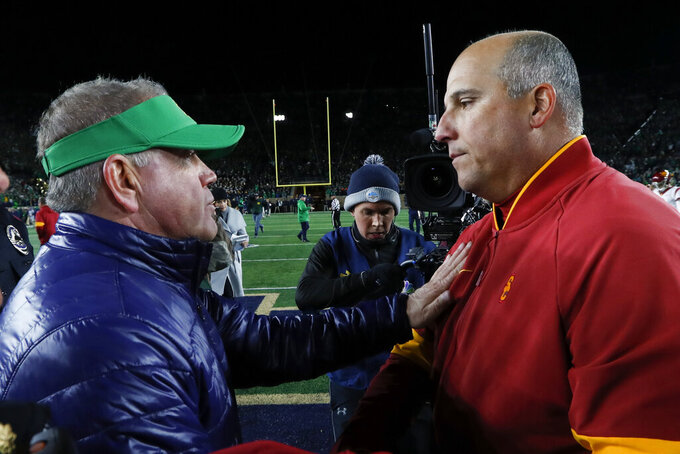 Halfway through the season there has already been a coaching change in major college football.

Rutgers fired Chris Ash before the calendar flipped to October. Who else is a candidate to join Ash in buyout life?

The Trojans are about where they figured to be with a difficult schedule to start the season. Helton has used three starting quarterbacks, pulled off a nice win at home against No. 13 Utah and played Notre Dame competitively in South Bend. USC has played hard and it wouldn't be shocking if the Trojans still managed to win the Pac-12 South. Short of winning out, it probably won't be enough for Helton. USC is still searching for an athletic director. After the season, the first order of business for the new boss will be to evaluate the football coach and determine whether he can make USC an elite program again. After that, maybe call Urban Meyer.

Expectations at Vandy are modest. Get to some bowl games and try to avoid a bunch of embarrassing loses. Mason had done OK fulfilling those requirements through five seasons (two bowl games, 24-38 overall and 9-31 SEC). This season has been a wreck and it's difficult to imagine how a team that just lost at home to UNLV by 24 points will salvage respectability. Vanderbilt's patience is not without limits.

The Illini have taken baby steps forward in three seasons under Smith, but not much has changed this year. This was athletic director Josh Whitman's idea of a splashy hire and he might be inclined to cut Smith some extra slack if the 61-year-old can close strong. If not, Whitman will probably need to cut his losses and try again.

USF ended last season on a six-game losing streak and lost the first two this year (the Bulls have now won two straight). Strong is in a precarious spot in his third season. Athletic director Michael Kelly did not hire Strong. The coach has two years left on his original five-year contract. Having a coach go into a season with only two years left on a deal would be unusual and not an ideal way to hit the recruiting trail. So the question is not really can Strong win enough in the second half to keep his job, but can he win enough to earn an extension?

Addazio received an unenthusiastic two-year extension after last season, his fifth seven-win campaign in six years at BC. The Eagles started this season 2-0 with a victory against Virginia Tech, but since they have beaten only Rutgers and their most memorable moment was being on the wrong side of a beat down at home by Kansas. The ACC being what it is (not so great) maybe Addazio can cobble together bowl eligibility, but if not it is probably time for both BC and him to try something else.

Things are trending toward three openings in the conference.

At New Mexico, former Notre Dame coach Bob Davie, 65, had a serious health scare earlier this season, but even before that it seemed likely that his eighth season in Albuquerque would be his final one. New Mexico looks on its way to a third straight losing season, and sixth overall under Davie.

UNLV's Tony Sanchez was basically given a bowl-or-bust ultimatum by his athletic director at the end of last season. The Rebels are 2-4, though a win at Vanderbilt maybe provides a hint of hope for turnaround under the fifth-year coach.

Colorado State is 2-5 in the fifth season of Mike Bobo's tenure, which started with three straight seasons of 7-6 overall and 5-3 in conference play. That looks as if it might have been the peak for Bobo, who also struggled with health issues last season.

There is a bunch of second-year coaches off to rocky starts and some fans have already had enough. The list includes Chip Kelly (UCLA), Willie Taggart (Florida State), Jeremy Pruitt (Tennessee), Chad Morris (Arkansas), Joe Moorhead (Mississippi State) and even Scott Frost (Nebraska). Firing a coach after two seasons is unlikely even in an age where patience is nearly nonexistent. Of this group, maybe Taggart could get Florida State officials to seriously consider a $17 million buyout if the Seminoles (3-3) miss out on a bowl game again.