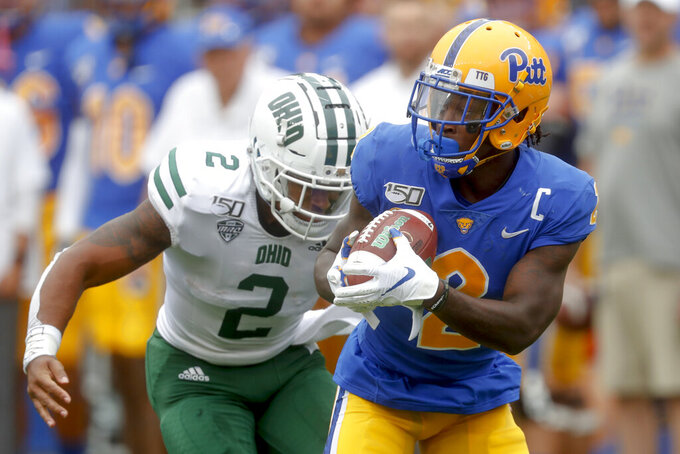 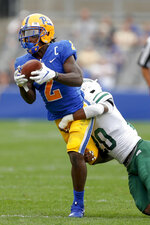 PITTSBURGH (AP) — Pittsburgh quarterback Kenny Pickett deleted most of his social media accounts before the season as a way to help him stay focused amid all the noise. So he didn't know and didn't particularly care about the reaction to his uneven performance in an opening loss to Virginia.

Instead, Pickett kept doing what he's done since the moment he arrived on campus more than 2½ years ago: he kept grinding, confident the protection issues in front of him and the accuracy issues that plagued him against the Cavaliers would work themselves out. For the most part in an orderly 20-10 win over Ohio on Saturday, they did.

Working behind a line that appeared to improve by the snap, Pickett passed for a career-high 321 yards, including a 74-yard touchdown to Maurice Ffrench that gave Pitt (1-1) an early 10-point lead it never came close to squandering. A week after hitting on barely half of his 41 attempts while getting sacked four times, Pickett hit on 26 of 37 passes and was taken down just once.

"I just think we executed better all around, not just me," Pickett said. "The offensive line blocked great. Receivers got open. Everything was just clicking."

Ffrench finished with 10 receptions for 138 yards, both career bests. A.J. Davis ran for 89 yards for Pitt and Vincent Davis added 50 on the ground, including his first career touchdown that put the Panthers up 17-0 midway through the second quarter. That was more than enough cushion for a defense that kept the Bobcats (1-1) in check. Defensive tackle Jaylen Twyman finished with three of Pitt's six sacks as the Panthers never let Ohio quarterback Nathan Rourke get going.

Dealing with the after effects of a fever that left him at less than 100%, Rourke hit on 15 of 27 passes for 177 yards and couldn't make anything happen with his legs. Rourke, who ran for 75 yards in Ohio's season opener against Rhode Island, finished with minus-43 yards on the ground. The Bobcats punted 10 times, finished with just 12 first downs and produced 212 total yards.

"It was a very, very frustrating game for all of us," Ohio coach Frank Solich said. "When something like this happens to you, all you can do is go back to work."

Ohio's only real push came late in the third quarter when De'Montre Tuggle's 7-yard touchdown run drew the Bobcats within 10. Ohio would get no closer. The Bobcats managed just one first down over their final three drives and Pitt's size advantage up front wore Ohio down. The Panthers took over at the Pitt 7 with 7:05 remaining and never let the Bobcats get the ball back, bleeding the clock behind an offensive line that pushed Ohio around until the clock hit zero.

Ohio: The Bobcats might be the preseason favorites in the MAC but the secondary could be an issue. Ohio let FCS-level Rhode Island pile up 291 yards through the air in Week 1 and again looked shaky.

Pitt: Even without starting linemen Rashad Weaver and Keyshon Camp — both of whom are out for the season with knee injuries — the defense could still be dangerous. Ohio struggled to generate any rhythm with Rourke under duress most of the day. Twyman's three sacks were the most by a Panther defensive tackle since current Los Angeles Rams star Aaron Donald did it against Utah in 2011.

While Pickett tuned out the criticism after Week 1, Pitt center Jimmy Morrissey did not. The senior felt his teammate shouldered entirely too much of the blame.

"We gave up 14 pressures as an offensive line," Morrissey said. "When you get hit 14 times, I don't blame him for wanting to scramble. He's getting hit that many times, what quarterback in the country has to be confident in their o-line after that performance? It was more on us. We should have got more heat than he did."

The Panthers ran for 160 yards on 37 attempts. Three players — A.J. Davis, Vincent Davis and V'Lique Carter — all had at least six carries. Pitt head coach Pat Narduzzi will continue to spread it around for the time being.

"We're going to play the hot guy," Narduzzi said. "It'll be that way until we find out who 'The Dude' is."

Ohio: The Bobcats travel to Marshall next Saturday, the return of the "Battle for the Bell." Ohio leads the all-time series 33-20, including a victory in 2015 in the last game between the two schools.

Pitt: Visits 15th-ranked Penn State next Saturday in the final game of a four-game renewal of the in-state rivalry. The Nittany Lions have won the last two meetings by a combined 84-20.

"I don't like them one bit," Morrissey said of the Nittany Lions. "That's pretty obvious. I play for Pitt."