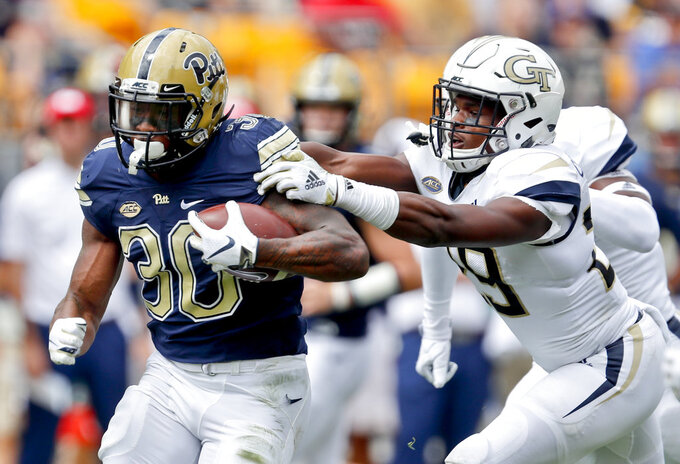 Pittsburgh running back Qadree Ollison (30) breaks fee from Georgia Tech defensive back Tariq Carpenter on his way to a touchdown run in the first quarter of an NCAA football game, Saturday, Sept. 15, 2018, in Pittsburgh. (AP Photo/Keith Srakocic) 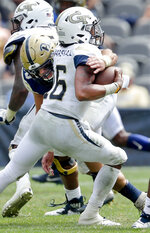 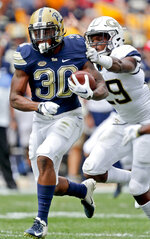 PITTSBURGH (AP) — Qadree Ollison ran for 91 yards and two touchdowns and Pittsburgh's defense kept Georgia Tech's triple-option in check during a 24-19 victory in the ACC opener for both teams on Saturday.

Ollison scored on runs of 31 and 8 yards for the Panthers (2-1, 1-0), who bounced back from an ugly blowout loss to rival Penn State by jumping on the Yellow Jackets (1-2, 0-1) early and then holding on late.

Darrin Hall added a touchdown run for Pitt. Quarterback Kenny Pickett left briefly due with a left leg injury at the end of the first half but played the entire second half, completing 16 of 23 passes for a season-high 191 yards and an interception.

TaQuon Marshall scored on a pair of short touchdown runs in the second half for the Yellow Jackets and finished with a team-high 103 yards rushing. He struggled through the air, completing just one pass until Georgia Tech's final drive. Marshall ended up 6 of 15 for 66 yards and an interception on a heave to the end zone with just under 10 minutes remaining that was easily picked off by Pitt's Phillipie Motley to end any real threat the Yellow Jackets had of mounting a comeback.

A week after rolling up 602 yards in a loss to South Florida, the Yellow Jackets managed just 386 against the Panthers, 99 of it coming on a last-gasp drive in the final minutes. Jordan Mason added 94 yards rushing and B-back Qua Searcy — starting in place of injured KirVonte Benson — added 38 in his first career start but the Yellow Jackets did little in the first half while falling behind 21-0.

Coach Paul Johnson called for a fake punt from the Georgia Tech 28 in the first quarter, and Antwan Owens was stuffed for a two-yard loss. Three plays later Hall burst across the goal line from five yards out to put Pitt up 14-0 with 5:20 left in the first quarter.

Georgia Tech faced another fourth down at the Pitt 23 in the second quarter. Rather than attempt a field goal, the Yellow Jackets went for it. Needing five yards, Marshall dropped back to pass, which sailed high and out of the reach of Jalen Camp.

Pitt took advantage immediately. Pickett turned a flea flicker into a 60-yard completion to Taysir Mack to flip the field and when Ollison darted in for his second touchdown, the Panthers were on their way to putting their humbling 51-6 setback at the hands of the Nittany Lions firmly in the rearview mirror.

Georgia Tech: The Yellow Jackets have to stop beating themselves. The playcalling was odd at times. So were a couple of personal foul penalties on late hits that handed Pitt yardage on drives that turned into touchdowns.

Pitt: Considering the daunting stretch ahead — two of Pitt's next four games are on the road against ranked opponents — the Panthers found their season at an early tipping point and responded emphatically. The defense stayed disciplined against Georgia Tech's idiosyncratic attack and the offense was efficient if not spectacular. It's a formula that could work if Pitt wants to be a factor in the ACC's wide-open Coastal Division.

Georgia Tech: Hosts No. 2 Clemson next Saturday. The Tigers have won five of the last six meetings, including a 24-10 victory last October.

Pitt: The Panthers travel to North Carolina on Saturday. The Panthers are 0-5 against the Tar Heels since joining the ACC in 2013.