Pitt defense will be tested by Tennessee's up-tempo offense 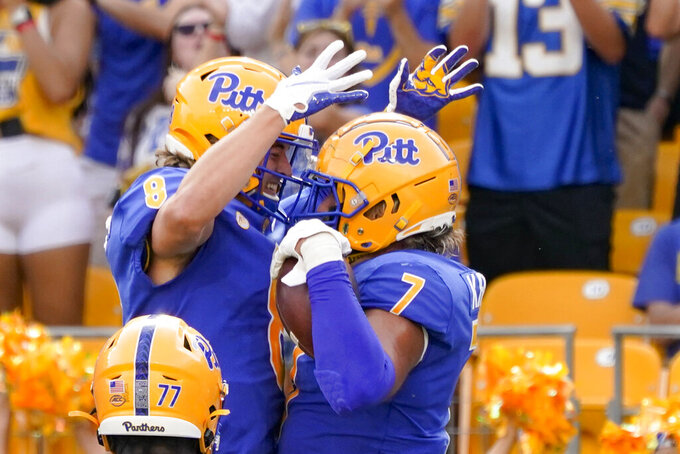 Pittsburgh quarterback Kenny Pickett (8) celebrates with tight end Lucas Krull (7) after throwing him a touchdown pass during the first half of an NCAA college football game against Massachusetts, Saturday, Sept. 4, 2021, in Pittsburgh. (AP Photo/Keith Srakocic) 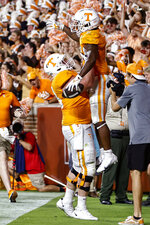 KNOXVILLE, Tenn. (AP) — The Tennessee Volunteers are about to see if the Pitt Panthers can handle their speed.

Tennessee ran 94 plays in the Vols' 38-6 win over Bowling Green in the opener, while Pittsburgh's defense was on the field for 54 snaps in a 51-7 rout of UMass. Pittsburgh and coach Pat Narduzzi is familiar with what Vols coach Josh Heupel's up-tempo approach from his days at Central Florida.

After one game, the Vols look faster than UCF under Heupel.

UCF ran 76 plays against Pitt in a 35-34 loss at Heinz Field in 2019 and 79 in a blowout victory the year before. Pitt defensive coordinator Randy Bates said his younger players can watch all the film they want but won’t truly appreciate the speed the Vols will play with until Saturday.

“You really don’t know how fast it really is until you’re in the game,” Pitt defensive coordinator Randy Bates said. “The biggest challenge is, the young guys can’t visualize what they’re getting into. We’ll do our best to explain it, and they have to go out there and live it.”

This is a big game for programs trying to make a statement after winning their season openers. The Panthers are looking to improve on last year’s 6-5 record, while Tennessee is desperate to recover from 3-7 in Heupel's first season.

Heupel has been working to finetune his offense, which clicked in spurts.

“When it looked good, all 11 were operating as one,” Heupel said. "When it didn’t, somebody was off. We’ve got to have great fundamentals and technique, learn from those things and get better this week. Certainly can do that.”

Center Cooper Mays went down with what appeared to be a lower leg injury in Tennessee’s debut against Bowling Green last week. Heupel said he is hopeful Mays will be ready.

Byron Young, who is expected to be a force as an edge rusher on defense, didn’t play in the opener because of eligibility issues stemming from a sports academy he played at in 2017. The academy folded in 2018, which has raised some questions for the NCAA. Heupel is expecting Young to be available against the Panthers.

Pitt compiled 97 sacks over the 2019-20 seasons, the highest total in the country over those two years. Pitt had five sacks in its opening rout of UMass without Rashad Weaver, who now is in the NFL with the Tennessee Titans.

After completing 9 of 11 passes for 94 yards in the first quarter of the opener, Tennessee quarterback Joe Milton struggled. He finished 11 of 23 for 139 yards and a 40-yard touchdown. Narduzzi saw enough to understand Milton’s potential.

This game has been dubbed the Johnny Majors Classic in honor of the man who coached Pittsburgh to a national title in 1976 before returning to the Volunteers where he was coached through the 1992 season. Majors, who died last year at 85, wrapped up his coaching career back at Pittsburgh from 1993 to 1996.

“It’s unique that coach Majors had such a huge impact on both programs,” Heupel said. “As a player and a coach, his legacy lives on here at Tennessee. He’s a part of the foundation of who we are. He’s a cornerstone of it.”