Pitt undaunted by many doubters in ACC title game vs Clemson 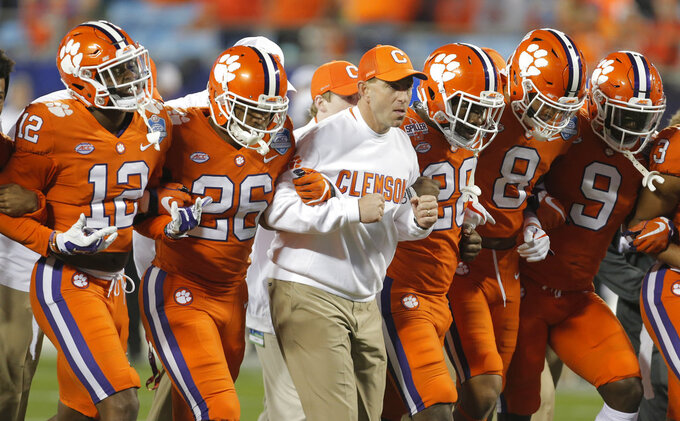 CHARLOTTE, N.C. (AP) — George Aston has felt the slights throughout his career. That's why he's not surprised so few give Pittsburgh any chance to topple No. 2 Clemson in the Atlantic Coast Conference championship game Saturday night.

"We know nobody really respects us or gives us any credit even when we have great game," the senior fullback said of the ACC Coastal Division champions. "Even after we win, they'll probably still find a way to discredit us or (say) Clemson had a bad game."

Aston and the Panthers (7-5) might be the only ones who believe there's a chance to upset the surging ACC Atlantic winners. The Tigers (12-0, CFP No. 2), three-time defending ACC champions, enter with the conference's top scoring offense and a defense that's No. 1 in the league in keeping opponents from scoring.

Clemson tailback Travis Etienne, the ACC's leader with 1,307 yards and 19 touchdowns, was named league player of the year. The Tigers experienced and heralded defensive front of ends Clelin Ferrell and Austin Bryant and tackles Christian Wilkins and Dexter Lawrence have locked down the line of scrimmage by allowing less than 85 yards a game rushing.

Clemson also has a huge edge in big-game experience. It has advanced to the past three College Football Playoffs following its ACC title wins and has that 2016 national championship in which many current Tigers played.

"I think from here on out, kind of, we just keep breaking records, especially the senior class," Renfrow said. "It's something we shoot for, being our best, being the best we can be."

Clemson has not lost many games in that time, although it knows what it's like to lose to Pittsburgh. Among the two regular-season losses the Tigers have had (they've gone 46-2 the past four regular seasons), one was a 43-42 stunner unranked Pitt pulled on No. 2 Clemson in November 2016.

Pitt coach Pat Narduzzi said that result won't have much bearing on this game, although Aston said there's much the Panthers can take from the win.

"We really do have good luck playing No. 2 teams," he said.

Narduzzi said Friday that as incentive the team sees a picture of Bank of America Stadium when it leaves the locker room.

Things to watch in the ACC title game:

LOOKING FOR LOVE: Clemson coach Dabo Swinney has chastised fans last Sunday, at least those grousing that the Tigers 56-35 rivalry win over South Carolina was not dominating enough. Swinney clarified it's a small percentage of the fan base. Still, "I don't want anything to creep into the culture of our program. I don't want players ever to walk off the field with a win that so-called felt like a loss," he said. The Tigers are looking for a 13th win for the third time in four seasons.

DUECES WILD: Pitt has a penchant to topping No. 2 teams under coach Pat Narduzzi . The Panthers defeated second-ranked Clemson in 2016, then closed the 2017 regular season with a 24-10 victory over No. 2 Miami. The Panthers have won four straight games as unranked opponents against Top 3 competition since 2002.

COACHING CAROUSEL: It's that time of year when Clemson assistants are part of the speculation for college openings. Tigers defensive coordinator Brent Venables said he's recently talked with Texas Tech AD Kirby Hocutt— (the two were linebackers together at Kansas State. Both of Clemson's offensive coordinators Tony Elliott and Jeff Scott have been discussed in several openings, including recently vacant Georgia Tech. Expect that buzz to continue as December deepens.

JOINING SPURRIER: Clemson coach Dabo Swinney traded quips and critical comments with Steve Spurrier while he led South Carolina from 2005-2015. Swinney has the chance to join his friend (the two became close over the past decade) as the only Power Five programs with four straight conference title game wins. Spurrier's Florida Gators won the Southeastern Conference championship game from 1993-96. Swinney's Tigers have won the past three.

INCONSISTENT COASTAL: Pitt is the sixth team in the past six years to represent the Coastal Division. All previous five Coastal winners, starting with Duke in 2013, then Georgia Tech, North Carolina, Virginia Tech and Miami, all lost in the championship game. Florida State won the title in 2013 and 2014 with Clemson taking the past three. Look for Virginia, if the pattern holds, to represent the Coastal next year as the only one of the seven teams not to win the division the last six seasons.

AP Sports Writers Aaron Beard in Raleigh, North Carolina, and Will Graves in Pittsburgh, Pennsylvania contributed to this report.