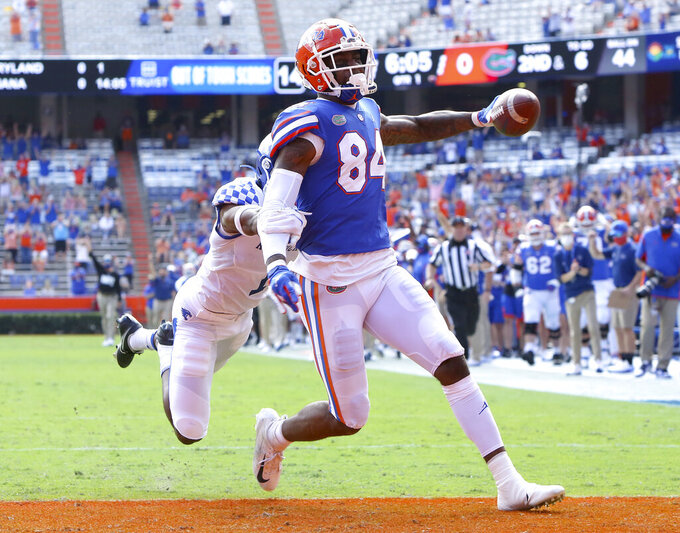 GAINESVILLE, Fla. (AP) — There was no shortage of Kyle Pitts highlights at Florida’s pro day Wednesday, from his measurables to his moves to even his mindset.

It was a refresher course for anyone who watched the versatile tight end play last season.

Whether he was outjumping, outrunning and outmuscling defensive backs, making linebackers and safeties look silly, or handling his own at the line of scrimmage, Pitts was undoubtedly one of the most dynamic pass catchers in the country in 2020 and possibly the best college player at his position in years, maybe even decades.

No one would be surprised to see him be an instant star at the next level.

It was a chance for scouts to get the kind of up-close look they couldn’t over the past year because of COVID-19 travel restrictions and because the NFL combine was canceled.

Pitts put on a show, even before he stepped on the field to catch passes from Trask for maybe the last time. His 83 3/8-inch wingspan was more than impressive, even by NFL standards. The 6-foot-6, 245-pound Philadelphia native also had a 33 1/2-inch vertical, recorded 10 feet, 9 inches in the broad jump and managed 22 repetitions of 225 pounds on the bench press.

Pitts later covered the 40-yard dash in 4.45 seconds, not far off tight end Vernon Davis’ combine watershed mark (4.38) set in 2006. He ended the day running routes for Trask and then raised some eyebrows while sharing his No. 1 goal.

“Start at a high level and keep increasing every year and being able to do other things that other tight ends aren’t doing, which would make me special,” he said. “At the end of the day, with all the preparation and through the years, I feel like I’ll be the best to ever do it.”

Pitts is widely considered a lock to be a top-10 pick in the draft, and at least one recent mock had him going second overall behind Clemson quarterback Trevor Lawrence. ESPN analyst Mel Kiper Jr. called Pitts “my highest-graded tight end EVER” on Twitter.

How high could Pitts go? If not for so many teams being desperate for quarterbacks, he probably would be one of the first few guys off the board.

Pitts caught 43 passes for 770 yards and 12 touchdowns in 7½ games last season. He missed 10 quarters following a vicious hit against Georgia in early November that knocked his helmet so sideways that his facemask fractured his septum. He had surgery and sat out two full games.

He returned, scored three times against Kentucky and then opted out of the Cotton Bowl after another unstoppable performance against Alabama in the Southeastern Conference championship game. NFL executives have been drooling ever since.

It’s still entirely possible for Pitts to be the highest-drafted tight end in the modern era (since 1970). Denver drafted Riley Odoms fifth overall in 1972. Davis and Kellen Winslow Jr. (2004) both went sixth.

The Lions have the most recent tight end drafted in the top 10, T.J. Hockenson in 2018. Hockenson is among a growing list of recent first-rounders at the position — Hayden Hurst, O.J. Howard, Evan Engram, David Njoku, Eric Ebron and Tyler Eifert are others — whose careers, at least at times, have fallen short of expectations.

The general consensus is Pitts will end the trend.

“He’s such a dynamic player and he has so much versatility,” Florida coach Dan Mullen said. “Not only is he a great person to be around as a coach, when you’re in the meeting room and you’re designing a game plan, he’s awful fun to have that little spot that you can go put up on the board and say, ‘That’s him and how are we going to move him around?’ That’s a lot of fun, too.”