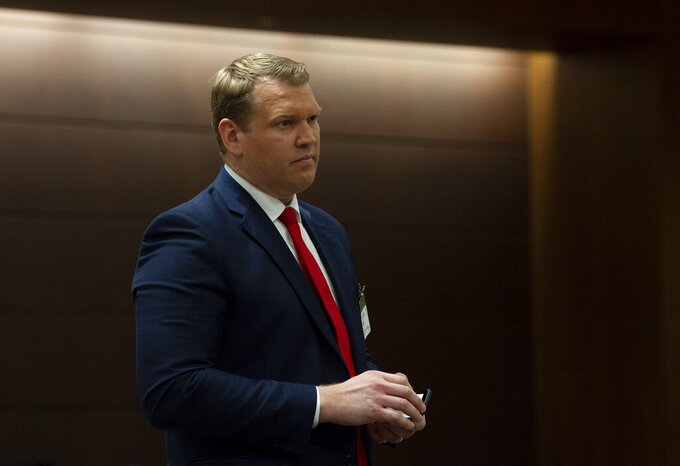 FILE - Co-founder and CEO of the Concussion Legacy Foundation Chris Nowinski waits to appear at the House of Commons' Health committee on sports-related concussions in Ottawa, Ontario, in this Wednesday, Feb. 6, 2019, file photo. With the COVID-19 pandemic pushing the 2020 FCS season from fall to spring, and the 2021 fall season planned to be played as usual, it begs the question: How much football is too much football? (Adrian Wyld/The Canadian Press via AP, File)

North Dakota State has played 16 football games in a season twice and no fewer than 14 every year since 2010.

Now imagine the Bison playing 27 or 28 in a calendar year.

It could happen, considering they have won eight of the last nine Football Championship Subdivision titles.

With the COVID-19 pandemic pushing the 2020 FCS season from fall to spring, and the 2021 fall season planned to be played as usual, it begs the question: How much football is too much football?

Sports medicine experts are wary of the physical and mental toll on players who will have two seasons shoehorned into 10 or 11 months.

“I know there are some concerns about the amount of games being played in a certain months’ span but, in my opinion, we’re here to play football and I would rather play too many games than not enough,” North Dakota State junior linebacker Jackson Hankey said. “Going a fall without it for the first time in however many years it’s been since I’ve done that makes you grateful for the games you play.”

North Dakota State plays in the Missouri Valley Conference, one of three FCS leagues playing up to eight regular-season games this spring. Other leagues are playing four to seven games. The Ivy League and Mid-Eastern Athletic Conference are idle.

The FCS playoffs, reduced from 24 to 16 teams for this spring, will be in April and May, meaning the finalists play four more games. Preseason practice for the 11- or 12-game fall regular season begins in August, with the potential for four or five more games for teams that make playoff runs into late December or early January.

The potential for an extraordinarily high number of games is more at issue in the Missouri Valley. Five of its current teams made the most recent playoffs.

“We're trying to work smarter than harder,” said North Dakota State coach Matt Entz, whose team opens Sunday at home against Youngstown State. “We're trying to have a real good understanding of the workload because we’re going to try to put two seasons in a calendar year.”

The NCAA said in a statement to The Associated Press the Division I Football Oversight Committee got input from experts and stakeholders when putting together the FCS calendar and schools were provided scheduling flexibility to help them manage virus-related challenges.

“It was with the understanding that student-athlete well-being must remain the top priority,” the statement said.

Normal demands on players are doubled with two seasons in one year, Lindley said, and there is no end in sight for the current COVID-19 testing protocols and safeguards. Lindley said athletic trainers must watch for signs of anxiety, depression and other mental illness.

“When you do that every single day consecutively, plus their academic expectations and impact on their social (life) in or out of a pandemic, that’s a pretty high level of expectation for an 18- to 22-year-old,” Lindley said. “If that ends in April, how quickly do you turn around and turn the switch back on and say, ‘We’re back at it now?'”

Lindley said players whose spring seasons end prematurely because of major injuries face the likelihood of also missing the fall season. There also is a greater probability of soft-tissue injuries, such as hamstring pulls, if strength and conditioning training during the ramp-up to preseason practice was inadequate or if there isn't enough in-season recovery time.

The 2021 model also increases the number of exposures for possible concussions.

“We know getting hit in the head a thousand times a calendar year is bad, and getting hit in the head 2,000 times in a calendar year is going to be worse,” said Chris Nowinski, a former Harvard football player who co-founded the Concussion Legacy Foundation and partnered with Boston University to open a research center for chronic traumatic encephalopathy (CTE), a degenerative brain disease associated with brain trauma.

Hits not serious enough to result in a concussion diagnosis still have a cumulative effect, he said, and some players develop inflammation in their brains during a season. Most, he said, recover in the offseason.

Entz said he plans to closely track the number of snaps for each player and he will substitute freely at some positions. More players will have opportunities on special teams to reduce stress on starters.

“I have to go against my upbringing where more was better to where it has to be quality over quantity,” Entz said. “We can’t burn out our players too early or extend them too much here in the spring with the idea we’re going to turn around in August and do it over again."

One Missouri Valley school, Indiana State, announced last month it wouldn’t play this spring because of health and safety concerns associated with playing two seasons in one year.

Of eight MVC sports information directors who responded to an AP survey, none said any players had decided to opt out of the spring season because of safety concerns.

“Coach Entz made a really good point to us as a team that he’s never heard of anybody complain about playing more games of football because we do all this practicing throughout the entire year, offseason lifting, summer training,” junior defensive end Logan McCormick said. "There are things you have to take into consideration like taking care of our bodies, limiting reps for some guys. Other than that, we’re looking forward to both seasons.”