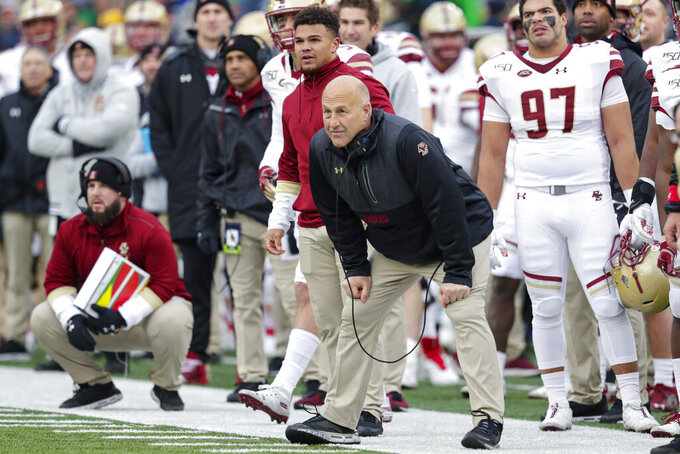 The Eagles (5-6, 3-4 Atlantic Coast Conference) need a victory over Pittsburgh on Saturday to earn a sixth win and qualify for a bowl berth. A loss at Pitt (7-4, 4-3) would clinch BC’s first losing season since 2015.

Asked if Addazio needed to reach a bowl game to keep his job, athletic director Martin Jarmond said: “I’m not getting into that.”

“We’re just focused on Pitt right now,” he said. “I’m just trying to figure out how we can win that game to get bowl eligible, for these seniors especially. You want them to be able to experience that. And we’ve got an opportunity this Saturday.”

Addazio said he didn’t need to talk to his team about what’s at stake.

BC actually has a backdoor way to get into a bowl, even with a loss to Pittsburgh. If there aren’t enough six-win teams to fill all 78 spots in the 39 bowl games, the remaining berths would be given to five-win schools according to their graduation rates.

Boston College was tied for eighth in the rankings, but it would be first among the five-win schools.

“You want to win,” Jarmond said. “That's what it's about. You want to finish the right way. ... You don't want to have to rely on APR. You want to get six wins and get bowl eligible. That's the goal, and that's the focus.”