Plenty of coaching changes around SEC during offseason 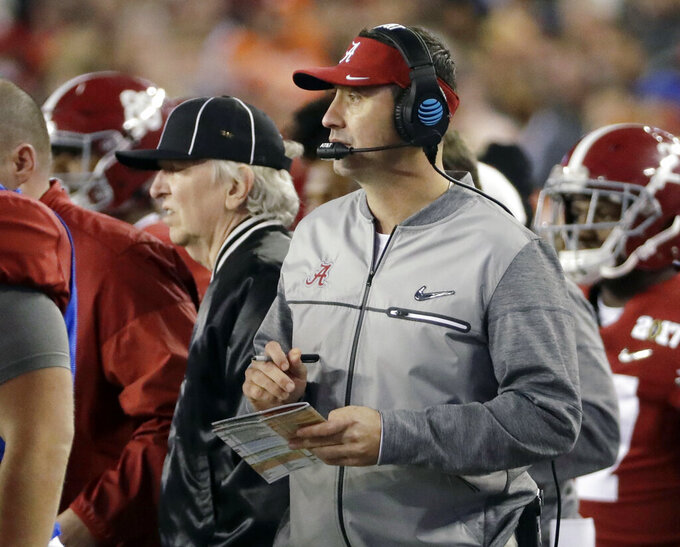 FILE - In this Jan. 9, 2017, file photo, Alabama offensive coordinator Steve Sarkisian is seen on the sidelines during the second half of the NCAA college football playoff championship game against Clemson, in Tampa, Fla. There was plenty of coaching turnover in the Southeastern Conference this offseason. It just didn’t involve the guys in charge. (AP Photo/David J. Phillip, File)

KNOXVILLE, Tenn. (AP) — There has been plenty of coaching turnover in the Southeastern Conference this offseason, just not involving any head coaches.

This will be the first year since 2006 that the SEC begins a season with no new head coaches. But despite the continuity at the top, there has been nearly a 40 percent turnover in offensive and defensive coordinators.

The reasons vary. Some SEC coordinators became head coaches, a couple moved on to the NFL and some left for coordinator jobs at other schools. But all that shuffling is business as usual in the SEC, where no coordinator has spent more than three full seasons at his current position.

"I think so many people look at football as so much different than their own particular jobs, and I never quite see it that way," Tennessee offensive coordinator Jim Chaney said. "Don't people in you all's position move and do different things? We do too."

While the Big 12 and Atlantic Coast Conference had a similar amount of coordinator turnover, each of those conferences had four new head coaches who initiated staff overhauls.

The movement in the SEC last year was a result of coordinators getting opportunities elsewhere.

And that's not new.

The Vols' Chaney exemplifies the nomadic nature of an SEC coordinator. He's back for his second stint as Tennessee's offensive coordinator after holding the same title at Arkansas, Pittsburgh and Georgia since his last stay in Knoxville.

The only 2018 SEC coordinator who got fired was Mississippi defensive coordinator Wesley McGriff.

"You're always prepared as a coach," said Georgia coach Kirby Smart, who got his job after an eight-year stint as Alabama's defensive coordinator. "You know guys get opportunities."

Even when they're well paid. A seven-figure salary for an SEC coordinator isn't unusual anymore.

"We're committed to having the best staff we can possibly have to help get us where we want to be," Tennessee coach Jeremy Pruitt said.

Sarkisian and Chaney landed in rarified air; last season no college football offensive coordinators made as much as $1.5 million.

While the short tenures for most SEC coordinators might make this seem like a job for a young up-and-comer, the typical coordinator actually arrives with plenty of experience.

But Alabama's status as a consistent title contender shows coordinator changes don't have to be a hindrance. Sarkisian is Alabama's fourth offensive coordinator in as many seasons.