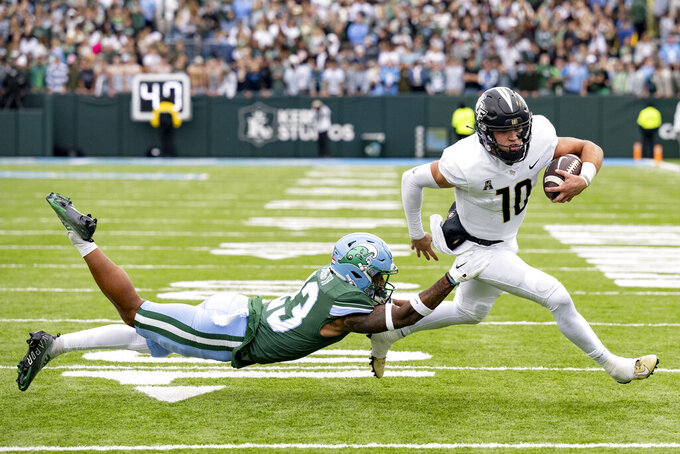 NEW ORLEANS (AP) — John Rhys Plumlee ran around, through or away from the stingiest run defense in the American Athletic Conference again and again.

Plumlee accounted for 308 yards and three touchdowns, and No. 22 UCF took over first place in the AAC with a 38-31 victory over No. 16 Tulane on Saturday.

“We ran the football really good against the best rushing defense in our league," UCF coach Gus Malzahn said. "John Rhys, he’s a special talent, there’s no doubt, that he can run that effective and he’s a tough guy, too.”

Returning from an Oct. 29 concussion against Cincinnati, Plumlee rushed for 176 yards and two TDs, highlighted by a 67-yard scoring run. He also passed for 132 yards, including his 8-yard TD pass to Alabama transfer Javon Baker.

“It felt good to make some big plays. But obviously a huge team win,” Plumlee said. “I’ve never been one to kind of play timid or play scared. It’s just not in my game.”

Plumlee is from Hattiesburg, Mississippi, about a 90-minute drive north of New Orleans. He estimated 35 people made that trip, and he treated them to a UCF record for QB rushing in game — but fell short of his career-best 212 yards rushing for Mississippi against LSU in 2019.

“Plumlee’s speed was probably the biggest thing,” Tulane linebacker Dorian Williams said. “It’s hard to practice for something like that.”

Tulane (8-2, 5-1) pulled within a touchdown with 11:39 left when Michael Pratt hit Reggie Brown in the back of the end zone, capping a drive extended by Pratt's fourth-and-6 conversion on a pass to Lawrence Keys.

But the Knights responded with a 16-play, 75-yard drive that consumed 8:07 and was sustained by a fourth-down pass interference penalty on Tulane's Jarius Monroe on running back Isaiah Bowser's pass intended for Plumlee along the sideline.

“I put that one on the money," a smiling Bowser said of his rare passing attempt. "If the corner would have never held (Plumlee), he would have made that play, and that was a big play.”

Bowser finished off the series with his second short touchdown run of the game, making it 38-24 with 3:32 left.

Tulane drove for one final score on Pratt's 6-yard pass to Shae Wyatt with 1:46 left, but the Green Wave's onside kick was recovered by UCF.

“I’m disappointed. We didn’t play our best game,” Tulane coach Willie Fritz said. “When you play a quality team like UCF, you have to play well.”

UCF finished with a season-high 336 yards rushing against a Tulane defense that was allowing just 127 yards rushing per game this season and had not allowed any previous opponent to run for more than 200 yards.

Tulane's defense has “veteran after veteran on that back end and they keep everything in front of them,” Malzahn said. "We felt real strong that John Rhys, our quarterback, needed to run the football and that’s what happened.”

Plumlee helped UCF to a 10-0 lead with his long scoring run, on which he darted through an opening up the middle, cut outside to his right and outraced all pursuers. He also had a 47-yard run.

UCF: Bowser has scored in eight of 10 games this season, thanks to his reliability in short yardage situations. All 13 of his TDs have come from inside the 4-yard line. The Knights rushed for more than 300 yards for the third time this season.

Tulane: The Green Wave was hurt by mistakes, not to mention some bad luck. There were a handful of dropped passes, including one in the end zone on third down by Dea Dea McDougle. Pratt missed some open receivers and Tulane turned the ball over when a UCF punt hit the Green Wave's Kiland Harrison in the back as he tried to block for the return along the sideline.

“In these types of games, the little details are going to be the key to victory — whether it was a dropped ball or a missed throw or a penalty," Pratt said.