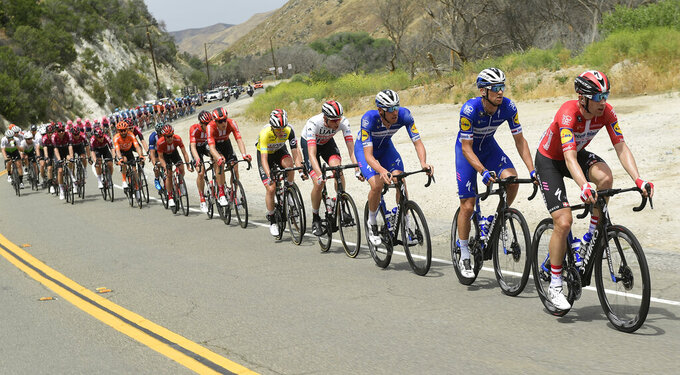 The peloton rides through the mountains during the seventh and final stage of the Tour of California bicycle race Saturday, May 18, 2019, near Santa Clarita, Calif. (AP Photo/Mark J. Terrill) 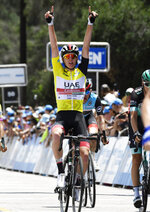 PASADENA, Calif. (AP) — Tadej Pogacar did the work necessary to win the Tour of California on the steep climb of Mt. Baldy.

His team did the work it needed for him to win on the run-in to Pasadena.

With big names going on the attack midway through the final stage Saturday, UAE Team Emirates was able to consistently keep their young star out of trouble. And when the field came back for a sprint at the Rose Bowl, all Pogacar had to do was raise his hands in overall victory.

Cees Bol of Team Sunweb won the group sprint ahead of three-time world champion Peter Sagan to win the seventh stage, while Jasper Philipsen capped a big day for Team Emirates with a third-place run.

Pogacar's first WorldTour stage race victory came ahead of Sergio Iguita, who went on the attack on one of the day's final climbs, and Kasper Asgreen of the strong Deceuninck-Quick Step team.

"This was my main goal this year," said the 20-year-old Pogacar, who was inspired to pick up cycling by his brother. "I knew that I was prepared. I surprised myself a bit that I took the overall win, but I'm really happy and I'm looking forward to next year."

In the three-stage women's race, Olympic champion Anna van der Breggen held the lead she took on the first stage all the way to Pasadena, finishing 29 seconds ahead of teammate Katie Hall.

Elisa Balsamo beat Arlenis Sierra and Leigh Ann Ganzer in a sprint on the final stage.

"It's really special," said van der Breggen, who finished just behind Hall on the Stage 2 climb to Mt. Baldy. "Katie won here last year and I the year before. We get to work together now. Yeah, getting a one-two result, we didn't think that was possible before. It's great for the spirit of the team."

The short final stage took riders 126 kilometers from the San Gabriel Mountains to the Rose Bowl in Pasadena. And with Pogacar holding a 16-second lead on Higuita after his win on Mt. Baldy, the contenders knew they had to make something happen on the short hills midway through the stage.

Max Shachmann got into an early breakaway with Davide Ballerini, Alex Hoehn and a handful of other strong climbers. Asgreen soon attacked the lead group, but their advantage over Pogacar's chase group was not enough to prevent the field coming together during the final circuits around the stadium.

Deceuninck-Quick Step, which had a strong week of racing, set the tempo for its sprinter, Fabio Jakobsen, and Team Ineos tried to set up Kristoffer Halvorsen with a lead-out. But it was Bol, riding for Team Sunweb, who timed his sprint perfectly to nip Sagan at the line.

"It was quite a chaotic stage," Sagan said. "I probably reacted a bit late to Bol's sprint."

Philipsen's third-place finish helped him secure the best young rider jersey, while Asgreen won the points jersey as the top sprinter and Ballerini secured the king of the mountains jersey.

"This is my first time here in California. It's beautiful country," Ballerini said. "I tried to win a stage but it wasn't easy. I tried to get away also today, but it was a very short, fast stage."

That was good news for Pogacar, who was able to hold onto his 16-second advantage over Higuita, riding for EF Education First. Asgreen was another second back to round out the podium, while former race winner George Bennett was 29 seconds back in fourth for his Team Jumbo-Visma.

Asked where the relatively unknown Pogacar picked up his beyond-his-years poise and tactics, he replied: "I think from all the racing over the years, with great coaching. I've been racing 10 years now and you learn stuff. But I still don't know everything."

It seems as if van der Breggen does.

The world's best rider by a wide margin, van der Breggen stayed close to the front of the peloton as it reeled in the breakaway, helping to ensure the final stage of the women's race would be a sprint.

American rider Coryn Rivera came to the front and was just starting to ramp up the speed when she sustained a mechanical problem at the worst possible moment. That opened the door for Balsamo, who held off Sierra and Ganzer with Chloe Dygert of the U.S. right behind in fourth.

Van der Breggen and Hall were joined on the final podium by Ashleigh Moolman-Pasio.

"It was a hard stage race. Three beautiful stages," van der Breggen said. "They didn't make it easy for us the last day. We're really happy to finish first and second. It's a great result."