Porous Oklahoma defense has had season to forget 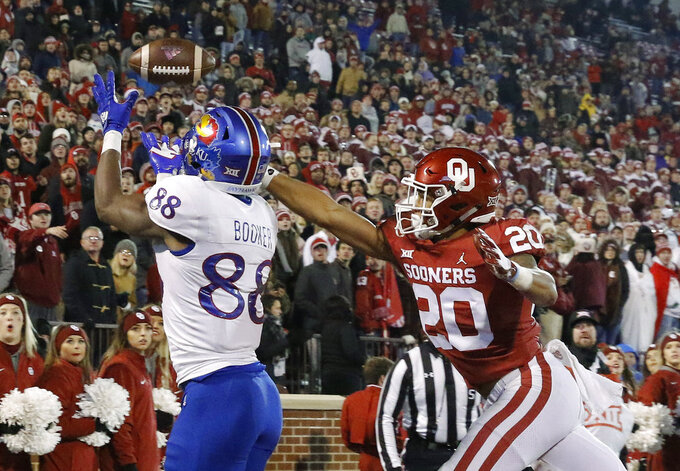 FILE - In this Saturday, Nov. 17, 2018, file photo, Kansas wide receiver Jeremiah Booker (88) makes a catch for a touchdown ahead of Oklahoma safety Robert Barnes (20) during the second half of an NCAA college football game in Norman, Okla. Oklahoma's poor performances on defense have nearly torpedoed one of the best offenses in college football history. (AP Photo/Alonzo Adams, File)

NORMAN, Okla. (AP) — Ruffin McNeill often uses the acronym FIDO when he talks to his players about dealing with mistakes. It stands for "Forget It and Drive On."

There have been lots of teachable moments for McNeill, the interim defensive coordinator for Oklahoma. The Sooners have allowed 449 yards per game this season — on pace for a school record — and they rank dead last in Big 12 Conference play in scoring defense and total defense.

What in the name of Lee Roy Selmon and Brian Bosworth is going on?

This year's defensive performance has nearly torpedoed one of the best offenses in college football history. Heisman Trophy contender Kyler Murray has done it all at quarterback — and he's had to because, most weeks, Oklahoma's defense has been ripped by opposing offenses.

The defense is trying to live up to McNeill's mantra, despite all the reminders of its shortcomings.

"I feel like at the end of the day, all the outside noise doesn't matter," said linebacker Kenneth Murray, no relation to the quarterback. "As a defense, that's stuff that we don't worry about. We just let people talk. We go out there and play for each other. We do what we do for the brother next to us."

Over the years, the Sooners have had some of the biggest stars and best defenses ever seen. Bosworth won the first two Butkus Awards for the nation's best linebacker, paving the way for Teddy Lehman and Rocky Calmus. There have been Thorpe Award winners such as Roy Williams, and Selmon won not only the Outland Trophy but the Lombardi Award as did fellow Sooners Tommie Harris and Tony Casillas.

This unit is a far cry from that. And the defense likely will have to improve in order for the fifth-ranked Sooners (11-1, No. 5 CFP) to beat No. 9 Texas (9-3, No. 14 CFP) in the Big 12 championship on Saturday. Texas gained 501 yards in the first meeting with Oklahoma in October, a 48-45 win for the Longhorns that left the Sooners embarrassed and cost defensive coordinator Mike Stoops his job.

"I know that will be a big talk with who we're playing and the fact that we made a change after we played these guys the first time," coach Lincoln Riley said. "I get that. I think we're progressing in a lot of ways, but we've got to put it all together."

Oklahoma's defense has actually been worse under McNeill. In six games under Stoops, the Sooners allowed 26.8 points and 421.2 yards per game. Under McNeill, those numbers have ballooned to 38.3 points and 476.8 yards, and Oklahoma has allowed 40 or more points in four straight games.

Winning Saturday can help the Sooners drive on, of course.

"End of the day, we learned our lesson and now we get a second opportunity to play those guys for a Big 12 championship," Kenneth Murray said. "That's really the focus right now, is trying to win a championship."

Texas is trying to ignore the chatter about Oklahoma's defense, too. Offensive lineman Patrick Vahe said the Longhorns respect Oklahoma's talent and believe the Sooners have potential.

"I think I've noticed a couple of changes," Vahe said. "Regardless of what the score says, they're a really good group of guys playing on that side of the field. You can't take them lightly at all. They're playing for the same purpose as you. They're still really good on that side."

Oklahoma was somehow able to find some good things on defense in its 59-56 win over West Virginia on Friday. The Sooners gave up a season-high 704 yards, but linebackers Caleb Kelly and Curtis Bolton scored touchdowns on fumble returns. A unit that has struggled to force turnovers made critical plays in the win that got the Sooners into the Big 12 title game.

"Obviously throughout that game, we had some things that didn't go our way, but we had a lot of things that we did well, ended up coming out with five total stops and two total defensive touchdowns," Kenneth Murray said. "That was one of the biggest moments of the game. Just getting those scores on defense is big in a football game. Definitely exemplifies FIDO."