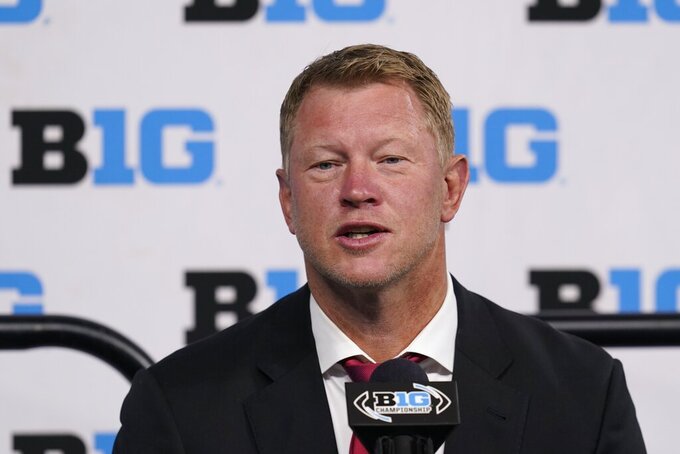 It's make or break for Scott Frost.

Nebraska is mired in its worst stretch of football in over 60 years, and through four seasons Frost has failed to deliver anything close to what was expected when he made his celebrated return to his home state and the school he quarterbacked to a share of a national championship.

Athletic director Trev Alberts announced late in last year's 3-9 season he would bring Frost back, but the 47-year-old coach had to take a $1 million pay cut and fire four offensive assistants.

The Huskers continue to be a shell of the program that has won or shared five national titles, produced three Heisman Trophy winners and is among just nine schools with at least 900 wins.

Nebraska hasn't won a conference title since 1999 and hasn't gone to a bowl since 2016. Its streak of five losing seasons is its longest since it had six in a row from 1956-61.

Since 2018, the Huskers' 15 wins under Frost are fifth fewest in the Power Five, their 16 road losses are tied for third most and their conference winning percentage of .286 is third worst in the Big Ten, ahead of Rutgers and Maryland.

Of the 10 Nebraska coaches before Frost who lasted more than four seasons, only Bill Jennings' .310 winning percentage from 1957-61 is worse than Frost's .341.

“We were competitive in every game last year. We had our chances to win,” said Frost, whose team lost seven games by seven points or less and none by more than nine.

“We made a ton of progress as a program from a talent perspective and from a culture perspective. We haven’t gotten it there yet," he said. "There’s a little piece we have to put together to make sure we get over the hump, but we’re excited to have the chance to do that.”

Whipple has taken full control of the offense while Frost, who had the final word on play-calling his first four years, assumes more of a CEO role.

“I think we just need to have a little more of a killer instinct to finish games, and when we get in those close games, we need to finish them,” Frost said. “Look forward to competing this year. I’m sure we’ll be in some more, and we’ve got to find a way to come out on top.”

Ochaun Mathis, one of the most sought-after players in the transfer portal, is expected to step in immediately at defensive end and pick up where he left off at TCU. Mathis picked Nebraska over Texas after recording 30.5 tackles for loss and 15.5 sacks in 38 games for TCU.

New offensive line coach Donovan Raiola's job became more difficult with the loss of guard Nouredin Nouili, who announced in June he would miss the season because of a failed drug test in the spring.

The Huskers already must find new starters at center and right guard, and tackles Teddy Prochazka and Turner Corcoran missed the spring with injuries.

Missed field goals, a blocked punt and a directional punt that went the wrong direction were among the special teams blunders that cost the Huskers games last year. Bill Busch's job is to clean things up. Nebraska has been awful on special teams under Frost, and with his job on the line, he hired Busch to oversee special teams full-time. Busch was a defensive analyst last year.

The Huskers have their most manageable schedule under Frost, and it starts Aug. 27 against Big Ten foe Northwestern in Dublin, Ireland. A Sept. 17 home game against Oklahoma highlights the nonconference schedule. November is the toughest month with the last four games against Minnesota (home), Michigan (away), Wisconsin (home) and Iowa (away).