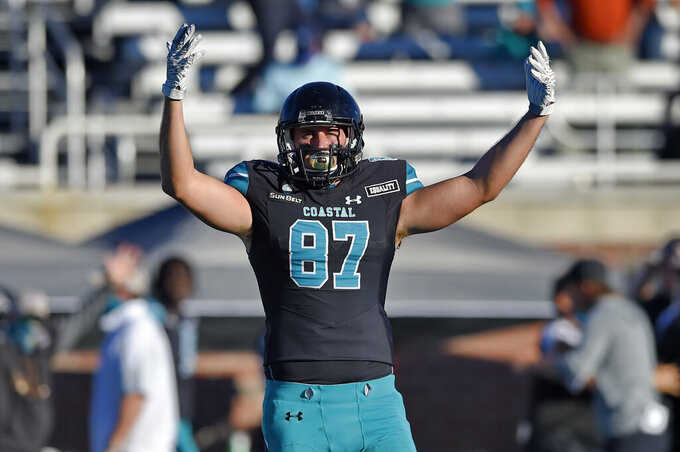 Coastal Carolina can capture its first Sun Belt Conference East Division championship and continue a historic run in the program’s 18th season. It would mark the Chants’ first conference title since elevating to the Football Bowl Subdivision in 2016 and preserve an opportunity for the program’s first undefeated regular season. Texas State could close a dismal season on a high note with two straight victories.

Texas State: QB Brady McBride is one the few bright spots for the Bobcats. The reigning Sun Belt Offensive Player of the Week, McBride completed 32 of 45 passes for 443 yards and five touchdowns in Texas State’s 47-45 win over Arkansas State on Nov. 21. The sophomore quarterback has thrown for 1,723 yards and 16 touchdowns out of the shotgun.

Coastal Carolina: DT C.J. Brewer was named Defensive Player of the Week after collecting a career-high 14 tackles in a 34-23 victory over Appalachian State on Nov. 21. Brewer also had 1.5 sacks in the victory, giving him a team-high 6.5 sacks for the season.

Coastal Carolina dropped one spot in the AP rankings after rallying in the second half to beat Appalachian State. The Chants previously held the highest ranking in Sun Belt Conference history at No. 15. … The Chants are the first Sun Belt team to open the season 8-0. … Coastal Carolina is traveling to San Marcos for the first time to face Texas State. The two previous matchups were both at Brooks Stadium in Conway, S.C. … The Bobcats have five players with 20 or more catches this season led by Marcell Barbee, who has 38 receptions for 540 yards and 10 touchdowns. … Texas State is averaging 28.9 points and 374.4 yards per game heading into its season finale.