Pruitt: Vols need to 'look in the mirror' to get better 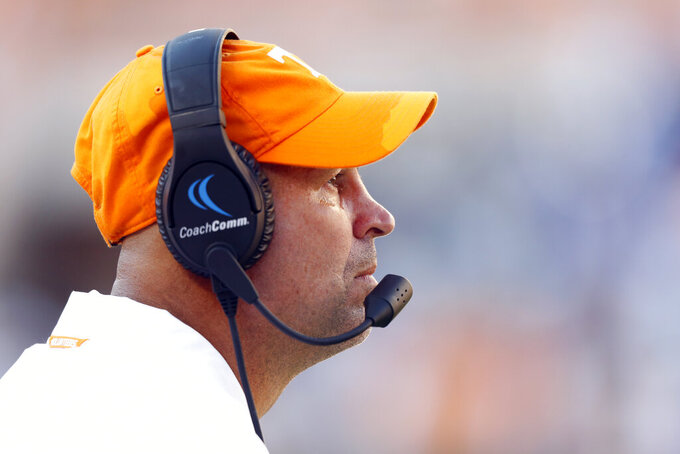 Tennessee head coach Jeremy Pruitt watches from the sideline in the second half of an NCAA college football game against Georgia State, Saturday, Aug. 31, 2019, in Knoxville, Tenn. (AP Photo/Wade Payne)

KNOXVILLE, Tenn. (AP) — Tennessee coach Jeremy Pruitt says he still has faith in his team as it attempts to bounce back from one of the most embarrassing defeats in school history.

"I believe in the guys in our locker room," Pruitt said Monday, two days after a 38-30 loss to 26-point underdog Georgia State. "I've said this all along. I really like this team. Just because I like them doesn't mean that we're where we need to be, but I like their work ethic. I like their 'want to.'"

Tennessee's stunning setback against Georgia State represented the latest pratfall for a storied program. The Volunteers are just 6-15 over their last 21 games heading into a home matchup Saturday with BYU (0-1).

This is new territory for Pruitt, who was part of five national championship teams as an assistant coach or director of player development. In his first 13 games at Tennessee, Pruitt already has suffered as many losses (eight) as he absorbed over five seasons as a defensive coordinator at Florida State, Georgia and Alabama.

Wide receiver Jauan Jennings and defensive backs Baylen Buchanan and Nigel Warrior are the only Vols who started at least one game in 2016 — Tennessee's last winning season. Buchanan didn't play last week due to a spinal condition that leaves his status for this season uncertain.

"If we're made the right way — and I'm talking about what's inside of us, about wanting to go back and have a little bit of pride about who you represent and who you play for — you go back and you dig a little deeper and try a little harder, maybe watch a little more film here or do a little extra in the weight room," Pruitt said. "Whatever it is, look in the mirror, figure out what we've got to do — each and every one of us — to get better."

Tennessee's three worst performances under Pruitt have come in their last three games. They closed the 2018 season by losing 50-17 to Missouri and 38-13 to Vanderbilt.

Any optimism created by that staff overhaul disappeared with a dreadful performance that had thousands of disappointed fans exiting their seats early in the second half.

Players remain confident they can recover.

"I think it will be easy for us to bounce back," outside linebacker Darrell Taylor said after the Georgia State game. "It's only one game, no matter who we lost to."

Yet the Vols showed weaknesses against Georgia State that could prove difficult to fix.

Tennessee got beaten on both sides of the line of scrimmage by a Sun Belt Conference team that went 2-10 last season. Georgia State ran for 160 yards while holding Tennessee to minus-2 yards rushing in the second half, and Panthers coach Shawn Elliott said afterward it was apparent his team was in better shape.

The Vols allowed four sacks in their last 21 offensive plays against a Georgia State defense that had recorded just 13 sacks the entire 2018 season. Tennessee played nine different offensive linemen Saturday rather than settling on a set five. Pruitt didn't indicate Monday whether he planned to continue rotating linemen against BYU.

Tennessee must take better care of the ball after committing three turnovers Saturday that led to 17 points. A defensive line with no returning starters couldn't contain Georgia State quarterback Dan Ellington and faces another challenge this week against BYU quarterback Zach Wilson.

"Kind of reminds me of Johnny Manziel," Pruitt said. "He can run around, extend plays, make all the throws."