Purdue defense will have to dig deep in test against Gophers 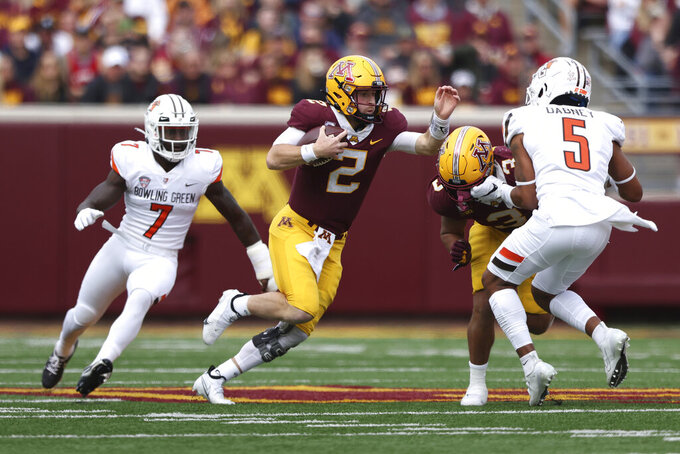 Coach Jeff Brohm came to Purdue with a reputation as a creative genius.

His offenses were fast, fun and fearless. They scored points by the dozens, winning shootouts.

So when the Boilermakers' defensive struggles became the obstacle, Brohm jumped in. He changed coaches, philosophies and changed direction.

On Saturday, Purdue's revamped defense will find out how much progress its made against an old nemesis with a visit from Minnesota.

“We’ve been awful against them on offense," Brohm said. “Two years ago, their quarterback came in here and you would have thought he was Joe Montana. He completed 21 of 22 passes and it was not good defense, is a nice way of putting it. Last year, we played better against the run, but we let them throw inside fade routes all day."

These are vastly different teams now, though.

It's a primary reason the Boilermakers are off to their best start since 2012 and are on the cusp of going 2-0 in league play for the first time since 2010 — despite losing their two top running backs to injuries along with their top receiver, David Bell (concussion protocol). It's unclear whether Bell will be cleared to play Saturday.

Minnesota (2-2, 0-1), meanwhile, has struggled since losing receiver Rashod Bateman to the NFL and top running back Mohamed Ibrahim with a season-ending lower leg injury in an opening night loss to No. 4 Ohio State.

The Gophers needed 10 fourth-quarter points to survive a scare from Miami (Ohio) then lost 14-10 to Bowling Green last weekend — a stunning result that prompted a players' meeting.

“We really just sat down and said, ‘This is where we have to make a decision,'" defensive end Boye Mafe said. “We know last week wasn’t good enough."

Coach P.J. Fleck reassured his team by noting 25% of Power Five schools have already lost to a Group of Five team this season and now Minnesota has a chance to right its season with a fourth straight win over Purdue.

Brohm and the Boilermakers defense also want to show they're better than people think.

“We’re starting the meat of the schedule, and we’ve got a lot of tough opponents,” Brohm said. “We still have a lot to prove, and we have to work hard to get better because that has to happen in order for us to win.”

Nobody wants to rebound more than Minnesota quarterback Tanner Morgan, who was 5 of 13 with 59 yards and two interceptions against Bowling Green.

Morgan will have some extra support at Ross-Ade Stadium, which is a three-hour drive from his hometown in Kentucky.

His mother, Pat, who attends every game, a brother and sister, his grandparents and an aunt and uncle are all expected to be in the crowd. Morgan's father, Ted, died this summer from brain cancer and the only game he'd missed before this season came in 2019 at Fresno State because his wife asked him to stay home.

“I think she gave my dad some heat, and that’s something we laugh about today,” Tanner Morgan said. “I’m incredibly blessed to have family that really loves me and a dad who did really love me and is really proud of me.”

The quarterback question has become a regular routine during Brohm's tenure, and it's back after Aidan O'Connell relieved Jack Plummer last weekend and led Purdue to the winning score. Brohm told reporters he would announce a decision to players Tuesday. Everyone else will have to wait until Saturday.

“Aidan has great poise in the pocket and great command of the offense," Brohm said. “His ability to grasp our offense and throw on time and hit intermediate throws is a plus."

The Gophers have two of the Big Ten's top 12 players in sacks. Mafe has four and defensive end Thomas Rush has three, after playing outside linebacker last season. The two are quickly becoming friends.

“Boye is a phenomenal teammate,” Rush said. “Just to be able to enjoy these moments with him, it’s awesome.”