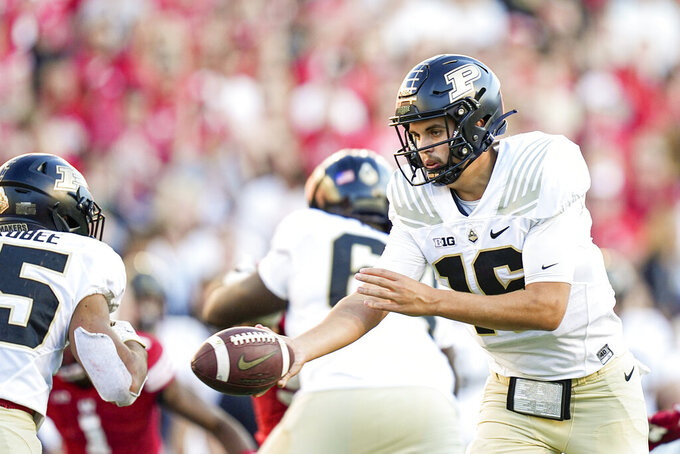 Line: Purdue by 4 1/2, according to FanDuel Sportsbook.

Purdue is a game behind West Division-leading Illinois and needs a win to keep pace or move into a tie for first place. The Hawkeyes are in a pack of four teams with three conference losses and trying to stay relevant in the division race. If Purdue can beat the Hawkeyes for the fifth time in six games, it would set up a crucial contest next week in Champaign, Illinois, with the winner holding the inside track to the conference championship game.

Iowa pass defense vs. Purdue QB Aidan O'Connell. The Hawkeyes have historically relied on a ball-hawking defense and it's been no different in 2022. They rank fourth in the league in interceptions (eight) and takeaways (13) — something they could exploit this week against O'Connell. He's thrown an interception in five straight games and had three two weeks ago at Wisconsin. O'Connell needs to be more efficient this week. He had 10 TD passes and eight interceptions over his last five games.

Iowa: RB Kaleb Johnson and QB Spencer Petras. A week ago, they finally gave the Hawekeyes offense a spark. Johnson, a true freshman starting his second straight game, ran 13 times for 93 yards. Petras completed a season-high 70% and threw his third TD pass of the season. This week could determine whether their performances were an aberration or an indication of a turnaround.

Purdue: WRs Charlie Jones and Tyrone Tracy. Coach Jeff Brohm hopes an open date last week helped Jones recover from a lower-body injury. Brohm probably won't reveal Jones' status until Saturday, but don't bet on Jones sitting this one out. Jones has played through injuries most of this season and with Jones and Tracy facing their old team, they'll be motivated to play — and play well.

Iowa has lost three of its last four after opening 3-1. ... A victory would make Purdue bowl-eligible for the second straight season and the fourth time in Brohm's tenure. It also would give the Boilermakers a 6-3 mark in consecutive seasons for the first time since 2000-01. ... The Hawkeyes will be playing their first game of the season on a grass field. Iowa has won three straight on grass, the last loss coming at Purdue in 2020. ... Devin Mockobee, a walk-on running back, leads the Boilermakers with 561 yards rushing and has three 100-yard games this season. ... Petras made his first career start in Iowa's most recent trip to Purdue, which Brohm missed because he tested positive for COVID-19. ... Jones and Tracy have combined for 1,075 yards of total offense this season. ... Iowa is fourth in the FBS in scoring defense (15.8 points) and total defense (265.6 yards), holding six teams to 13 or fewer points. ... Purdue will be playing in front of its second consecutive sellout crowd.