Purdue, No. 23 Northwestern battle for edge in Big Ten West 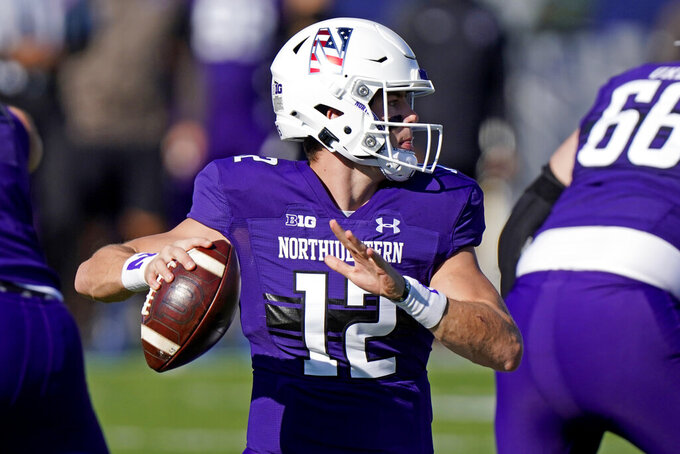 It's only Week 4, but the ramifications from this battle of unbeatens could help determine the West Division title, especially now that No. 13 Wisconsin has canceled two games. When Big Ten officials announced the resumption of play, they set a minimum requirement of playing six to qualify for the championship game. Since last week's game won't be rescheduled, a win Saturday coupled with a season-opening win over Iowa could give Purdue the inside track in the West.

Purdue QB Aidan O'Connell vs. Northwestern's secondary. The former walk-on now has a scholarship, the Boilermakers coveted starting job and a chance to sweep the two Big Ten schools from his home state. O'Connell leads the league in yards passing per game (326.5) and is fourth in efficiency rating (149.8). This week, he faces a defense that leads the league in interceptions (eight), is second in scoring defense (12.0 points) and No. 2 in pass defense (192.3 yards)

Northwestern: QB Peyton Ramsey. After relieving the injured Michael Penix Jr. last season and winning four gams to help Indiana reach a bowl game, Ramsey joined the Wildcats as a graduate transfer. So far, the pairing has worked perfectly. Ramsey is 3-0 in his new system and is chasing a second straight win in West Lafayette to keep Northwestern in contention.

Purdue: WR David Bell. Most thought the tandem of Bell and Rondale Moore might be the best receiver combination in the Big Ten. With Moore still out, Bell has thrived. After only two games, Bell is among the league leaders in receptions (22), yards (243 and TD catches (four) despite playing one fewer game and he's topped the 100-yard mark in a school record five straight games.

Northwestern has won seven of the last nine in this series including four straight at West Lafayette, dating to 2007. ... Purdue has beaten three straight ranked teams on its home turf including the 2018 upset of No. 2 Ohio State. ... The Wildcats have pitched second-half shutouts in each of their first three games and have scored 20 or more points in their first three conference games for the first time since 2002. ... Zander Horvath has run for 100 yards in three straight games, becoming the first Boilermakers back to achieve that feat since Kory Sheets in 2007.