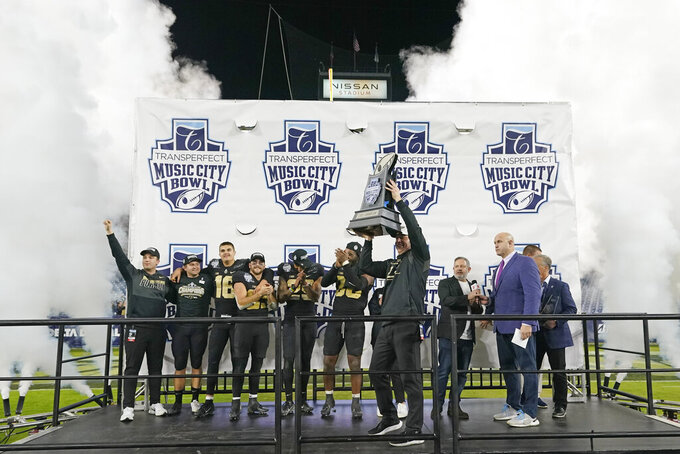 The Boilermakers are going home winners after a game that had people clicking over to catch an amazing finish.

Mitchell Fineran kicked a 39-yard field goal in overtime and Purdue finished off its best season since 2003 by overcoming a 14-point deficit and beating Tennessee 48-45 on Thursday in a record-setting Music City Bowl.

“It’s why you love the game, it’s why it keeps bringing you back,” O’Connell said. “The fact it’s unknown. No one knows what’s going to happen. It’s not a movie or TV show where the actors get retries. It seems like the world’s watching and anything could happen.”

Purdue (9-4) tied for the second-most wins in program history as only the 12th team in the Boilermakers' 134-year history to win nine games. They also won their fifth game away from home, something they hadn't done since 1943.

Tennessee (7-6) missed a chance to make Josh Heupel the first Vols coach to cap his debut season with a bowl win since Bill Battle won the 1971 Sugar Bowl. The Vols also snapped a four-game bowl victory streak with a loss that dropped the Southeastern Conference to 1-5 this bowl season.

The teams combined for 1,293 yards of total offense — second-most in overall bowl history, trailing only the 1,397 yards Baylor and Washington had in the 2011 Alamo Bowl. Tennessee became the 10th team in bowl game history to run 100 or more plays, and the combined 185 plays rank seventh.

This high-scoring game featured a flurry of big plays and points in the final five minutes only to see Purdue's defense make the deciding play.

On the first possession of overtime, Jamar Brown and Kieren Douglas stopped Vols running back Jaylen Wright short on fourth-and-goal. The stop was upheld on review for Wright’s forward progress being stopped despite Wright reaching the ball over the goal line before the whistle without a knee touching the ground while laying on top of Douglas.

“I love these guys," Heupel said. "They fight, they scratch, they claw and they compete. We came up a play short.”

Tennessee quarterback Hendon Hooker watched the replay on the large video board and was excited.

“I thought we scored, but you know it's a tough call,” Hooker said. "Feels like me and my teammates gave it our all.

After Purdue ran three plays, Fineran sealed the victory with his fourth field goal of the game, sending the Boilermakers running down the field in celebration after what Brohm called a "a crazy game."

"It really picked up there at the end,” Brohm said.

The Vols had a final chance to win in regulation, but Chase McGrath’s 56 yard field goal fell well short.

Tennessee finished with 639 yards total offense and Purdue had 623 in regulation — both bowl records before overtime. O’Connell easily set the yards passing record, well above the 383 Mike Glennon had with N.C. State.

Purdue came in without a pair of All-Americans in defensive end George Karlaftis and wide receiver David Bell, both prepping for the NFL draft, with a receiving corps further thinned by injuries. Broc Thompson, who needs offseason surgery on both knees, filled in with seven catches for a game-high 217 yards and two TDs.

The Boilermakers had a chance to keep this finish from being quite so exciting. But they settled for three field goals in the second quarter and only led 23-21 at halftime. Tennessee led 31-30 after the third.

Hooker finished with 378 yards passing. Tillman had three touchdowns on seven receptions for 150 yards, and Jabari Small ran for 180 yards. Small wasn't available in overtime with Heupel saying he was fighting “some things” all through the game.

Purdue: Brohm said his Boilermakers had a lot of wide receivers, and they tapped that depth in this game. O’Connell spread the ball around connecting with nine receivers.

“End of the day you can’t control when they yellow hankies come out," Heupel said. "There’s some things I don’t agree with. Yeah, everyone knows that. But it’s about what we can control.”

Tennessee is set up nicely for 2022. Tillman, who came into this season with eight career catches, finished with the Vols’ first 1,000-yard season since 2012. He’s already announced he’s returning next season along with Hooker, tight ends Jacob Warren and Princeton Fant and a handful of other Vols.

Purdue has O’Connell coming back along for 2022, giving Brohm a chance to build on an offense that threw the ball more than any other team in school history.