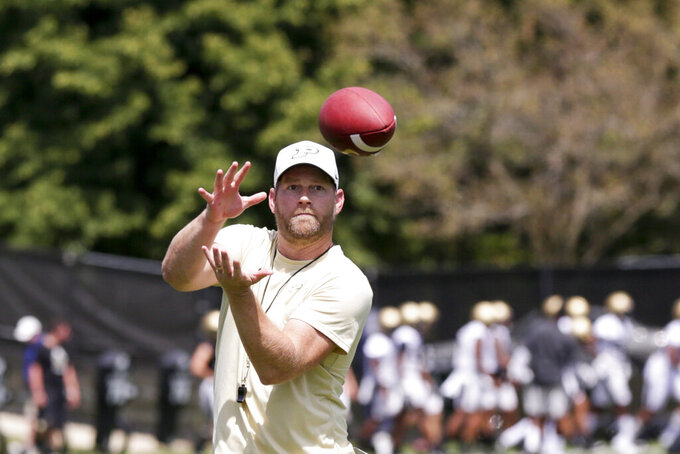 In this Friday, Aug. 2, 2019, photo, Purdue offensive coordinator Brian Brohm catches a ball during practice in West Lafayette, Ind. Brian Brohm went through his usual practice routine this week. He met with his older brother, Jeff, about game planning and the initial play-calling script as he prepared for Saturday's long-awaited season opener against Iowa. Less than a week after the Boilermakers fourth-year head coach tested positive for COVID-19 and was forced into isolation for 10 days, it's the other Brohm taking charge this weekend.(Nikos Frazier/Journal & Courier via AP)

Jeff Brohm plans to be back at practice Wednesday and back on the sideline Saturday.

Just two days after the Purdue coach's family attended the season-opening victory over Iowa as he watched from home, yelling loudly enough at times to scare his dog, Brohm said he would return to work this week after completing a 10-day isolation period with COVID-19.

“That was no fun for sure and I’m sure it wouldn’t be for anyone when you’re supposed to be coaching the team and you’re sitting on your rear end, while everyone else is doing all the work" he said Monday. “I think for the most part I was somewhat calm and collected."

The reaction of Coco, the dog who spent parts of the game in a corner, might suggest a different scene.

Still, Brohm was encouraged with what he saw from afar as Purdue picked up the first season-opening win of his four-year tenure.

He liked the play-calling of his younger brother, Brian, and the patience he showed with starting quarterback Aidan O'Connell. Jeff Brohm also enjoyed seeing his defense produce two key turnovers. And while it wasn't a perfect performance, Brohm couldn't quibble with the end result — a 24-20 victory over Iowa.

Now, a little more than a week after testing positive for the coronavirus, he's hoping for a normal practice week.

“I think it took a little time to get over a few of the symptoms," Brohm said. “It's like a normal sickness that you get, and it might last a little longer than some of the others that we’ve had, but I feel good and ready to get back. I can’t wait for Wednesday."

By Wednesday, the Zoom calls should end and this weekend, at Illinois, the plan calls for Brian Brohm to take regular spot in the coaches' box while Jeff Brohm calls the plays.

Also expected back this week is special teams coordinator Marty Biagi, who missed the game because of the Big Ten's protocols. Biagi, like Brohm, can return to the team complex Wednesday and should be available Saturday.

The bigger question might be who will missing for the Boilermakers.

All-American receiver Rondale Moore was a late week scratch against Iowa for undisclosed reasons. Brohm provided no additional details Monday, saying only that a decision about Moore would be made later this week.

Moore missed the final eight games in 2019 with an injured hamstring then decided not to play in 2020 after Big Ten officials announced they would delay the start of the season in August. Following a subsequent announcement that the season would start in late October, Moore came back — only to miss the opener.

“We’re always hopeful and we’ll see what happens during the week," Brohm said when asked specifically about Moore. “Whenever he’s ready to play, he will play.”

Without the electrifying receiver, O'Connell frequently threw to David Bell, last season's Big Ten's top freshman of the year and the league's newest co-offensive player of the week. Bell had 13 receptions, 121 yards and three TDs.

But the Boilermakers also found some complementary pieces.

O'Connell hooked up with Milton Wright seven times for 85 yards and tight end Payne Durham four times for 41 yards. Junior running back Zander Horvath had 21 carries for 129 yards and could get some help this week if sophomore King Doerue returns from an injured hamstring.

Starting offensive lineman Cam Craig will be doubtful this week and Brohm said linebacker Tyler Coyle, a graduate transfer from Connecticut, wouldn't play this week because of an undisclosed injury. Brohm does believe Coyle can return this season.

And Brohm insists he'll be back this week, too.

“It seems like it's been a couple of months so to get back, it’s about time," Brohm said. “I didn’t enjoy it (being home), but it was fun to watch our team compete to the end and win."