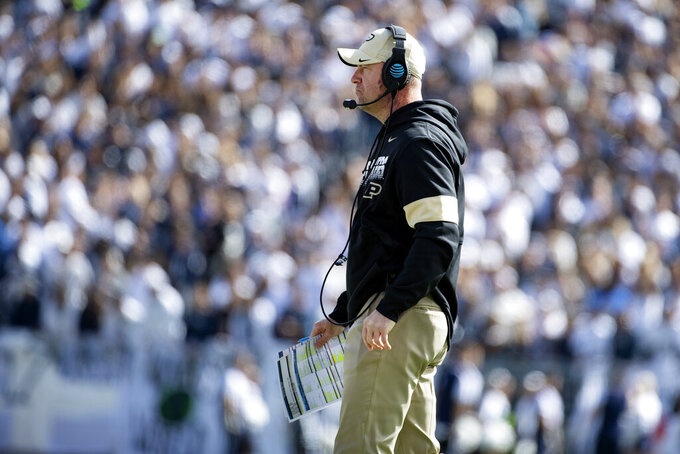 Purdue's promising future can be seen all over the field.

It's no longer a preview of coming attractions for the Boilermakers. This is the cast they're likely to lean on in a bid to make their third consecutive bowl game.

"King goes hard, runs hard," Brohm said Monday. "When we put a monitor on our guys that gauges the speed of how hard they go in practice every day, he's now at the top. He goes extremely hard. You know, that carries over to the game."

Brohm has made most of the moves out of necessity.

Plummer was pressed into service when Elijah Sindelar suffered a concussion against Vanderbilt and again when Sindelar broke his collarbone against Minnesota. Doerue took over in a backfield decimated by injuries and that struggled in the opening weeks. Bell got his big chance when All-American Rondale Moore injured his left hamstring in the first quarter against the Golden Gophers. Bell topped the 100-yard mark that day and again Saturday.

The reward came Monday when Bell was named the Big Ten's freshman of the week.

Brohm went all in on the youth movement last week after the Boilermakers (2-4, 1-2) lost their third straight.

He benched three starters on the offensive line, inserting sophomore Mark Stickford at left guard, sophomore Sam Garvin at center and redshirt freshman Eric Miller at right tackle. Together, they helped clear running lanes for a season-high 127 yards and allowed just one sack — nine fewer than Plummer endured the previous week at No. Penn State.

Brohm isn't the only one who noticed a change.

"I felt pretty comfortable out there," said Plummer, who was named the Big Ten's offensive player of the week Monday after going 33 of 41 with 420 yards and three touchdowns Saturday. "The first drive really settled me in a little bit. I was able to go out there and play with confidence, play loose and not be so tense. The offensive line played tremendous and the receivers played well. Everything was clicking."

Sure, more daunting challenges lie ahead for the Boilermakers.

There's this week's trip to No. 23 Iowa and next month's trips to Northwestern and Wisconsin. And Purdue still needs to win four of its final six to become bowl eligible.

"We think David (Bell) is an outstanding player, is an outstanding athlete," Brohm said. "He missed some time with an injury, still kind of battling through it. But he's battling through it and he makes plays. He goes up and makes catches in traffic, makes catches down the sideline. He's a big-time player and I think as we get better around him, I think we'll see even more."