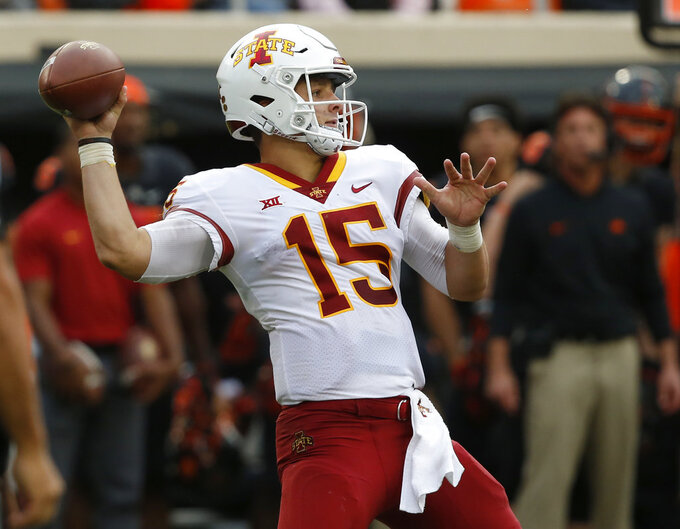 Purdy's stunning performance in the upset of Oklahoma State in what essentially was the college debut for the true freshman gave the offense a new look and a new sense of confidence.

Iowa State is still last in the Big 12 in total offense and ninth in scoring, but there's now a feeling that if Purdy proves to be the real deal, those numbers will improve in the weeks ahead.

"Our playbook is certainly a vast playbook. We can do a lot of things," coach Matt Campbell said. "With Brock's opportunity to get in the football game, he certainly opened up some playbook pages that we were able to get to."

The difference with Purdy, the third quarterback to play extensively for the Cyclones this season, is that he can run. He kept Oklahoma State off balance last weekend with that threat while passing for 318 yards and four touchdowns and rushing for 84 yards and another score in the 48-42 victory.

The 402 total yards are the eighth-highest figure in school history. Before Saturday, Purdy's only experience had been two plays against Akron three weeks ago.

"Brock moves out of the pocket, so you have to move with him," said wide receiver Tarique Milton, a redshirt freshman who had a breakout game of his own with four catches for 98 yards and a touchdown. "He's a mobile quarterback, so I guess it probably caught Oklahoma State by surprise and probably opened up more new opportunities in our offense."

Kyle Kempt began the season as Iowa State's starting quarterback, but he hasn't played since hurting his left knee in the fourth quarter of a Sept. 9 loss at Iowa. Zeb Noland started the next four games, including Oklahoma State. Both are accurate passers, but neither can move like Purdy.

Purdy entered the game on Iowa State's second series initially as part of a plan to give him some game experience, but he was so good Campbell had to leave him in.

"He brings a spark," center Colin Newell said. "He's a good leader definitely. He allows us to play our game and just goes in there and makes plays for us."

Kempt practiced Sunday but is doubtful for Saturday's home game against No. 6 West Virginia, so look for Purdy to be in there from the start. The Mountaineers are second in the league in total defense.

"I think the biggest thing for him is just to stay level headed and continue to grow," Campbell said. "And he's really done that since he's been here. I think like our football team, Brock is a great example of that. He's gotten better every day."

Purdy came to Iowa State after a prolific senior season at Perry High School in Gilbert, Arizona, where he threw for 4,405 yards and 57 touchdowns and rushed for 1,016 yards in leading his team to the Class 6A championship game. The Iowa State coaches got in with him during his junior year and were able to fend off late pushes from schools such as Alabama and Texas A&M.

Campbell said it was one of the most pleasant recruiting experiences of his career.

"You could tell there was a great sense of maturity," he said. "You watch him around his brother and his mother and you say, yeah, this guy's got a lot of those 'it' factors. He's got it together."

Coaches and teammates have to speak for Purdy because Campbell does not allow his true freshmen to talk with reporters. After one game, anyway, his play has spoken volumes.