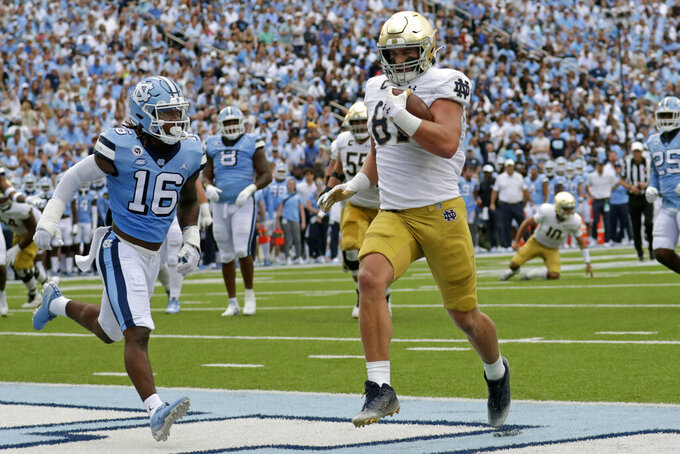 He is 2-0 since replacing the injured Tyler Buchner, has the Fighting Irish back at .500, is leading a major midseason turnaround and seems to be winning over coach Marcus Freeman.

“It’s been really good to see Drew, number one, make good decisions,” Freeman said. “That’s the most important thing at the quarterback position, you’ve got to make the right decision. Number two, he’s limited his turnovers, he’s taking care of the football. Number three, he’s starting to make a lot of plays.”

The plan seems to be working wonders for an Irish offense that sputtered early.

It helped the then winless Irish grind out a badly needed victory over California three weeks ago. Notre Dame used the momentum to fuel its best offensive performance this season at North Carolina when Pyne went 24 of 34 for 289 yards and three touchdowns. Notre Dame finished with 45 points and 576 total yards, both season bests.

Now, after a bye week, Pyne hopes to continue his hot streak Saturday against No. 16 BYU (4-1) in Las Vegas. The Irish are 3 1/2-point favorites, according to FanDuel Sportsbook, and a third consecutive win might not just turn heads but also get the attention of poll voters.

And all of it started when things looked bleakest as Notre Dame scored just 31 points combined in back-to-back losses to Ohio State and at home against Marshall. Those defeats sent the nation's preseason No. 5 team tumbling out of the rankings and then came word Buchner would miss the rest of his sophomore season with an injury to his non-throwing shoulder.

Suddenly, with a backup quarterback, everyone wondered if an already stagnant offense might get worse?

Pyne's starting debut began with another lethargic half against Cal where he struggled, at times, with communicating properly in the huddle. There were four straight possessions without a first down before Pyne fumbled a snap on drive No. 5.

But then the Connecticut prep star settled down and showed what he could do, completing 13 of his final 14 passes for 123 yards and two scores in a 24-17 victory, Freeman's first as a head coach.

At North Carolina, Pyne looked like a different guy to fans and teammates.

“It doesn’t matter if it’s a freshman, a fifth-year senior, the quarterback, he’s the guy. He’s in charge of the offense,” left guard Jarrett Patterson said. ”When it comes to the huddle, all eyes are on him, and we see that look in his eye now, that confidence he has. It really helps us out.”

Pyne's biggest challenge this week will be keeping the offense rolling early, something that's been a problem even in the victories. Two weeks ago, North Carolina forced a punt on Notre Dame's opening series and two of Pyne's passes were deflected by defensive linemen.

“We want to start with a better tempo than we did the first two weeks,” offensive coordinator Tommy Rees said. "So we’ll try to get him in a rhythm early.”

Of course, there are other factors in Notre Dame’s resurgance.

In the first two games the Irish struggled on the ground, averaging 103 yards rushing.

Since then, the offensive line has improved dramatically. The Irish have run the ball with authority and consistency, increasing their per game average to 217 yards over the past two games. Naturally, that's helped Pyne, too.

Pyne also continues to benefit from his relationship with Buchner, who has watched the two games since his injury from the coach's booth next to Rees. Buchner has been charting players and, when appropriate, consulting Pyne throughout the week.

With four ranked teams still on this season's schedule, Pyne will take whatever advice he can to keep Notre Dame moving and improving.

“I sit in a lot of the quarterback’s meetings, those two guys really interact well, bounce ideas off of each other and feedback with coach Rees,” Freeman said. “It’s a really healthy relationship that I think is elevating the play of Drew."