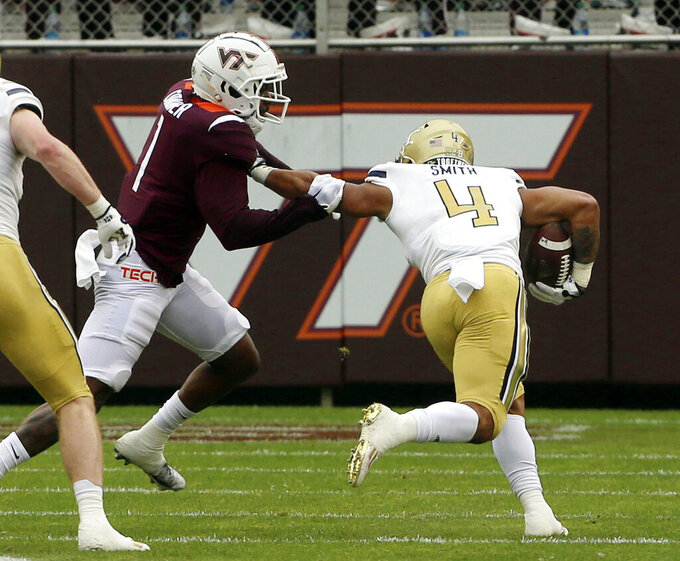 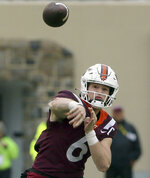 BLACKSBURG, Va. (AP) — Zach Pyron threw a touchdown pass and ran for a score in his first career start to lift Georgia Tech to a 28-27 victory over Virginia Tech on Saturday.

Pyron’s 9-yard touchdown run with 3:30 remaining was the game winner, as the Yellow Jackets (4-5, 3-3 Atlantic Coast Conference) rallied from a 27-16 deficit to snap a two-game losing streak.

“I still knew we could win the game, honestly,” Georgia Tech safety Clayton Powell-Lee said minutes after recovering a fumble by Virginia Tech’s Grant Wells on the Hokies’ final series to seal the game. “It was a matter of who was going to take it, who was going to buckle down for the ride and who was going to step up and make plays when the opportunity came. … I feel like me and a lot of my teammates stepped up.”

Virginia Tech (2-7, 1-5), which has lost six straight games, turned the ball over three times in the fourth quarter, two of which led to Georgia Tech touchdowns.

The Hokies wasted a chance to put the game away early in the fourth. They led by 11 and were inside the Georgia Tech 10, but Keshawn King fumbled, and Georgia Tech recovered. That led to a 56-yard touchdown pass from Pyron to Nate McCollum with 9:02 remaining that pulled the Yellow Jackets to 27-23 after they failed on the two-point conversion.

Pyron accounted for 319 yards in place of injured starter Jeff Sims, who missed his second consecutive game with a sprained foot. Pyron completed 19 of 32 for 253 yards with a touchdown and an interception, and he rushed for 66 yards.

“He’s got ice in his veins for a young kid like that, whether it’s sitting in there, standing in there and making the throws when he has to make the throws or lowering his shoulder to get the first down,” Georgia Tech interim coach Brent Key said.

Wells threw for 164 yards and rushed for 32 yards and a touchdown for Virginia Tech, which finished with just 308 yards and turned the ball over four times.

“We didn’t make plays when we needed to,” Virginia Tech coach Brent Pry said. “We let momentum slide a little bit. We’ll get there. It’s a process that we believe in and we’re going to stick to it. There’s so many good lessons and so many things to be encouraged about.”

Georgia Tech: The Yellow Jackets, who continue to be competitive under Key, may have a quarterback controversy on their hands. Pyron, a freshman, was playing in just his second game this season, and he played well in the Yellow Jackets’ loss to Florida State in their previous game, throwing for 198 yards and a score. Key will have an interesting decision in advance of Saturday’s game against Miami.

Virginia Tech: The Hokies scored in all three phases of the game, but four turnovers doomed them in their second consecutive one-point loss. Virginia Tech hadn’t lost six games in a row since 1987 and is on its way to its worst season since going 2-8-1 in 1992.

Pyron showed his toughness on his game-winning touchdown run. He split the tackle attempts of Virginia Tech’s Dax Hollifield and Chamarri Conner at the 3 — the Hokies’ two best defensive players — and barreled into the end zone. .... Under Pyron, the Yellow Jackets finished with a season-high 463 yards of offense. They hadn’t amassed more than 264 in their previous two games.

Georgia Tech’s defense, behind the play of Powell-Lee and D’Quan Douse, also had a season-high five sacks and shut out Virginia Tech in the fourth quarter. Douse had 2.5 sacks, and Powell-Lee, who missed most of practice this week with an illness, had an interception, along with his fumble recovery.