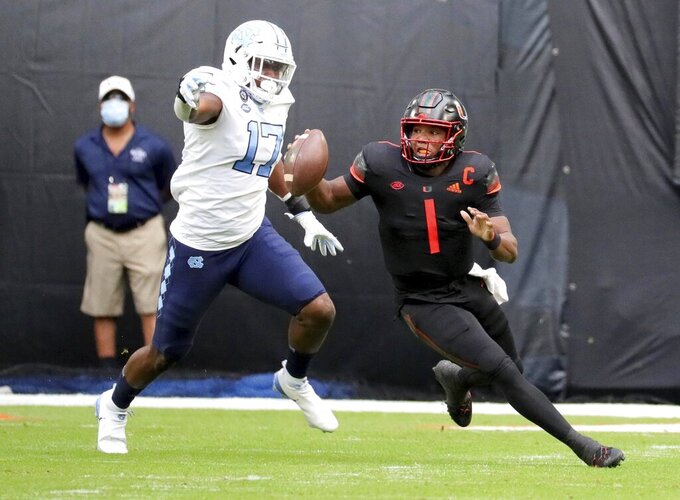 Miami quarterback D'Eriq King (1) is chased by North Carolina linebacker Chris Collins (17) during the first half of an during an NCAA college football game at Hard Rock Stadium In Miami Gardens, Fla, Saturday, Dec, 12, 2020. (Al Diaz/Miami Herald via AP)

CORAL GABLES, Fla. (AP) — D’Eriq King transferred to Miami with the hope of competing for championships.

The Hurricanes’ quarterback — who came to Miami with the intention of spending just one year at the school — announced Saturday he is returning for another senior season, taking advantage of the NCAA rule that essentially gave all college athletes another year of eligibility in response to the hardships caused by the coronavirus pandemic.

“It's always been a dream of mine to play in the NFL,” said King, who studied his 2021 draft options and where he would likely be selected. “But it's going to be there.”

His decision likely means Miami will enter next season as a top contender in the Atlantic Coast Conference, the league that sent Clemson and Notre Dame into this season’s College Football Playoff.

“I think the sky's the limit,” King said. “I think we can be really, really good next year.”

King helped Miami engineer a major turnaround this season. The Hurricanes never reached the AP Top 25 last season and sputtered their way to a 6-7 finish; they appeared in all 15 of the AP regular-season rankings this year, reaching as high as No. 7 nationally in early October.

King has completed 201 of 316 passes this season for 2,573 yards, 22 touchdowns and has only thrown five interceptions. King is also Miami’s second-leading rusher so far this season, with 520 yards and four more touchdowns on the ground.

At his current pace, King’s 63.6% completion percentage would rank as Miami’s all-time best, exceeding the record of 62.3% that Bernie Kosar has held since 1984. King’s percentage rate this season, for now, is the second-best single-year mark in Miami history; Jacory Harris completed 65% of his throws in 2011.

“Hearing that we're getting our guy back, our leader, that's huge for us,” tight end Will Mallory said. “A guy like that, it really elevates this team to a different level.”

No. 18 Miami (8-2) closes this season Tuesday in the Cheez-It Bowl against Oklahoma State (7-3). A win would ensure that the Hurricanes finish the season ranked for just the third time in the last eight years — and King coming back gives Miami a real shot of entering next year as a Top 10 team for what would be just the second time since 2005.

Miami coach Manny Diaz said this month he thought King would benefit from a return, and being in the same offensive system in two consecutive years for the first time.

“D'Eriq King has now chosen us twice,” Diaz said. “He certainly had a lot of options last year and I'm certain any school that he would have chosen at this time last year would have had a really good season.”

Next season will be King’s sixth in college — a very unusual quirk. He appeared in nine games for Houston in 2016, 10 more there in 2017, 11 for the Cougars in 2018 and four in 2019 before announcing that he was forgoing the rest of that season’s eligibility and would seek a transfer. Playing in only four games last season made it possible for him to remain eligible for a fifth year, and the NCAA rule regarding the pandemic gave him the option of extending his career once again.

King suggested this month that staying was a real possibility. And now it's official, the last major decision in a year that started with him choosing Miami, then found him coming to grips with the sudden death of his father, finding a home with the Hurricanes and even battling COVID-19 this season.

“There's a lot of pressure being the quarterback at the University of Miami,” King said. “But I like that.”