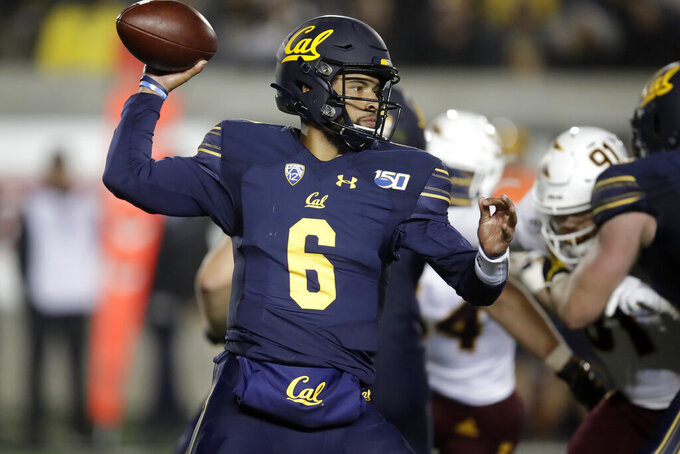 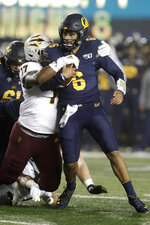 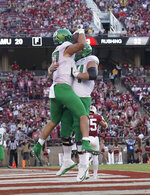 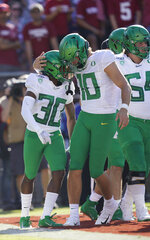 EUGENE, Ore. (AP) — The California Golden Bears have faith in quarterback Devon Modster, not just out of necessity with Chase Garbers out, but because they've seen firsthand what he can do.

Modster was UCLA's quarterback two seasons back when the Golden Bears visited Pasadena and fell 30-27 to the Bruins. Modster passed for 191 yards after replacing Josh Rosen at halftime, and he moved the Bruins into scoring position before J.J. Molson's game-winning field goal.

"Anyone who has been here long enough remembers two years ago and we were down at UCLA, Josh Rosen went down and Devon came in and pretty much torched us up," right tackle Jake Curhan said. "We all know he's plenty capable. We don't feel like there's too much we all have to do to get him there because he's been there and he's done it. There's plenty of confidence in what he'll be able to do."

Modster, who had to sit out of Cal's first three games after committing to the Golden Bears in December, was pressed into service when Garbers was injured during last weekend's 24-17 loss at home to Arizona State. Garbers is out indefinitely.

Modster was 5 of 14 for 23 yards and an interception in the end zone against the Sun Devils.

"Honest, I think I played terrible," he said. "I could have played a lot better, just missing a lot of receivers."

The Ducks had last weekend off after a 21-6 victory on the road against Stanford in their Pac-12 opener. Oregon, which lost the first game of the season to Auburn, hasn't given up a touchdown in three straight games for the first time since 1933. At the same time, Ducks quarterback Justin Herbert has thrown 13 touchdown passes over the last three games.

Coach Mario Cristobal was eying Cal's defense earlier in the week. The secondary, which has been dubbed "The Takers," has amassed 26 career interceptions. The Golden Bears have allowed just two passing touchdowns this season.

And then there's linebacker Evan Weaver, who leads the nation with 78 tackles. He's had 12 straight games with 10 or more tackles, the longest streak in the country.

"They're hard-nosed, they're tough, they're disciplined. They're also very talented," Cristobal said. "I think that gets lost a little bit; people just say, well, they're tough — they're really, really talented and they're coached really well.

Other items of note when the Ducks host Cal on Saturday:

HERBERT WATCH: Herbert's draft stock continues to rise with each game, and his stats are certainly impressive. He's one of just four quarterbacks nationally with two five-touchdown games this season. He's thrown a touchdown pass in 32 straight games, the longest streak in the nation. He's had 174 consecutive passes without an interception, also longest in the nation. This season he has 14 total touchdown passes to rank seventh nationally.

BOUNCING BACK: Modster wasn't the only Cal player upset about the loss to the Sun Devils. Cal was undefeated heading into the game and ranked No. 15 — the team's highest spot in the AP Top 25 since 2009. Weaver was particularly vocal after the game, suggesting that if his teammates weren't willing to put in the work, he didn't want them there.

"We're upset with how we showed out for that last game. Weaver's not the only one that's been upset," nose tackle Luc Bequette said. "Every single one of us has been outspoken amongst ourselves. We're all ready to attack this week and try to get back on track."

DEPTH HIT: Oregon third-string quarterback Cale Millen will miss the rest of the season after shoulder surgery on his throwing arm. That leaves the Ducks with Herbert, backup Tyler Shough and walk-on Bradley Yaffe at QB.

OFFICIALLY A DUCK: Oregon officially announced this week that receiver Devon Williams had transferred into the program, thus ending a strange saga that involved Oregon State.

The former four-star recruit played for USC last season and appeared in a game for the Trojans this year before entering the transfer portal. The Beavers announced last week that he had enrolled there. But last Friday Williams announced he had changed his mind and was headed for Eugene.

Williams was at practice with the Ducks this week, making it official. However, he won't be able to play for Oregon until next season under NCAA rules.