QB King to make 1st start for No. 6 A&M against Kent State 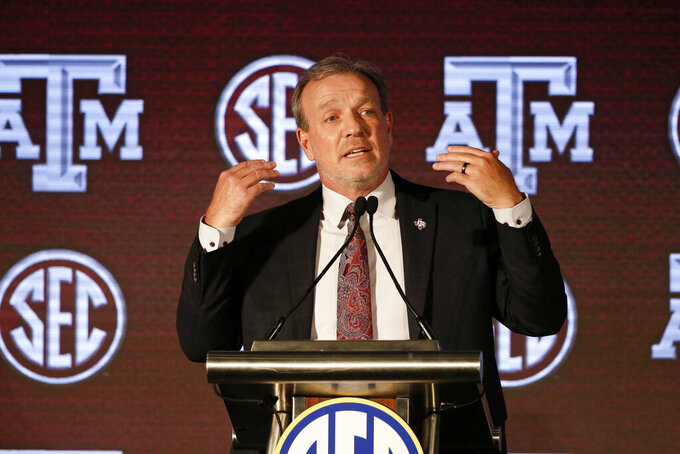 FILE - In this July 21, 20121, file photo, Texas A & M head coach Jimbo Fisher speaks to reporters during the NCAA college football Southeastern Conference Media Days in Hoover, Ala. Fisher enters the fourth season of his massive $75 million contract at Texas A&M having elevated the Aggies to among the top programs in the country. Now the challenge for Fisher and the Aggies is to take the next step and contend for their first national title since 1939. (AP Photo/Butch Dill, File)

His jitters really don’t have anything to do with King or his readiness to take over the starting job.

“I feel very comfortable about his preparation, the way he’s played,” Fisher said. “But at the same time, it’s still the first game. And I hate to say it, but if I was coaching Joe Montana or Tom Brady, I’d still be nervous.”

King used a strong camp to beat Zach Calzada for the role that Kellen Mond held for the last three seasons before he was drafted by the Minnesota Vikings this year. Many believed King eclipsed Calzada because of his athleticism, but Fisher said he was most impressed with King’s consistency and poise.

“Everybody says it was his athleticism, but it was his pocket presence and his ability to throw the football accurately and make decisions,” Fisher said. “I’m still a firm believer, decision-making and accuracy are how you play great football at quarterback. The legs are an added piece of what has to happen.”

King is the only major question mark on a team that returns six starters on offense, nine on defense and should have one of the best running games in the nation with Isaiah Spiller leading the way.

Despite King’s inexperience, Spiller has been impressed with his work in practice and believes he’ll be just fine this season.

“He’s going to prove a lot of people wrong this year,” Spiller said. “I feel like he’s going to have a very big year for us.”

The Aggies will be a big challenge for a Kent State team that went 3-1 in last year’s pandemic-shortened season.

“I believe in keeping it simple,” Kent State coach Sean Lewis said. “Simplifying things wins. It allows your guys to think fast, know fast, do fast and then go out and play fast without over processing things. We’re going to take that approach and give it our best shot.”

Kent State will attempt to slow down Spiller after another running back posted epic number against the Golden Flashes in their last game last season.

Buffalo’s Jaret Patterson had 36 carries for 409 yards and tied an NCAA record with eight touchdowns in a 70-41 win over Kent State on Nov. 28.

Spiller, who ran for 1,036 yards as a sophomore last season, sidestepped the question when asked if he’s eager to face a team that has allowed a running performance like that.

“I can’t wait for everybody to see all the work we’ve put in,” Spiller said. “I can’t describe how the game is going to go, but I know that we’re going to be ready.”

Lewis knows that his defense will have its hands full with Spiller.

“He can run around you, make you miss in a phone booth or run through you,” Lewis said.

The Aggies finished 9-1 last season with their only loss coming to national champion Alabama in the second game of the season. Some believed they should have been among the four teams in the College Football Playoff, but they were left out in favor of Notre Dame. Instead of sulking about that missed opportunity, this team has chosen to look forward.

“Our mentality is just to not worry about last year,” defensive back Demani Richardson said. “It kind of feels like unfinished business because of what happened last year. We know we have a lot to prove, and we know what we can do.”

Kent State plays its home games at Dix Field, which hold just more than 25,000 fans. On Saturday, they’ll play at Kyle Field, which has a capacity of more than 102,000 and will host a full crowd for the first time since 2019.

Lewis and his staff have been trying to prepare their team for the noise this weekend.

“Last time I checked, it was one of the top five biggest venues in all of college football,” he said. “We started piping in the band noise and their Aggie Yell cheers and all their fine traditions that they have down there once we started the preparation.”

The Aggies are looking forward to the stadium being back to normal after playing in front of smaller crowds last year.

“I just feel like it’s going to be rocking,” receiver Ainias Smith said. “The crowd is definitely going to give us a spark that we haven’t had in a while. I’m ready.”