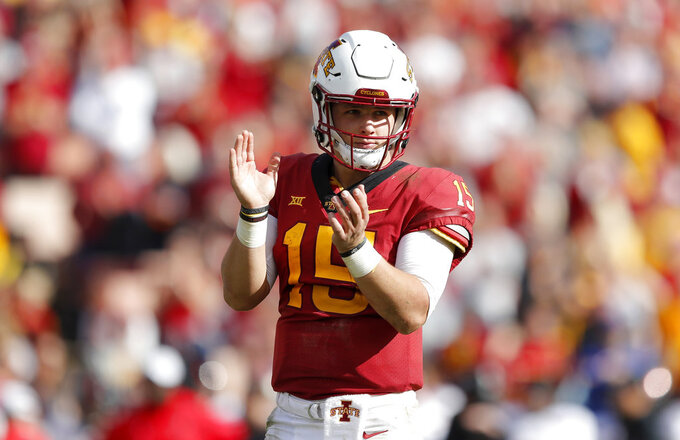 AMES, Iowa (AP) — Iowa State freshman quarterback Brock Purdy has played so well so quickly that sophomore Zeb Noland — the starter as recently as a month ago — has already decided to play elsewhere.

A shake-up caused by Purdy's progression is a good problem for the Cyclones to have.

But it's still a problem.

It's only taken three games for Purdy to look like an experienced starter. Purdy has nine touchdowns during that stretch — the best such streak at Iowa State in 20 years — while leading Iowa State (4-3, 3-2 Big 12) to three straight wins and an outside shot at a spot in the Big 12 title game.

"We love Zeb. Zeb is a tremendous young man," Iowa State coach Matt Campbell said. "I think it's kind of the nature of our sport, where he wants to go find somewhere to play."

Iowa State has been down this road before. Sam Richardson broke out as a freshman in 2012, completing 23 of 27 passes for 250 yards and four TDs in his first extended action, against Kansas. Richardson led the Cyclones to a bowl game later that season and maintained the starting job the next two seasons. But those were both losing years, and in 2015 Richardson ceded the No. 1 job to Joel Lanning, who beat Texas in his first career start.

Lanning held onto the job until late in the 2016 season, when Jacob Park moved past him on the depth chart.

Park, who looked like a possible future pro and whose emergence forced Lanning to linebacker, started the first four games in 2017 before he took a leave of absence he never returned from.

Park gave way to Kyle Kempt, who threw for 343 yards and three touchdowns to beat then-No. 3 Oklahoma in his first start. Kempt led Iowa State to an 8-5 record and a bowl win a year ago, but he injured his knee in an opening-day loss at Iowa in September and hasn't played since.

Kempt's injury paved the way for Noland, who won his first start in 2017 against Baylor.

Noland had his moments this fall, completing 63.6 percent of his passes. But when Purdy racked up 402 yards of total offense and five TDs in his first extended action at Oklahoma State, it was clear that Campbell couldn't keep Purdy on the bench.

Even Kempt, who is now healthy but playing backup, wasn't shocked to see Purdy's emergence after going through fall camp with him.

"He has a ton of ability," Kempt said. "So for him, it's applying what he's been learning and then using his God-given abilities to make plays. It's been really impressive."

The Cyclones should be fine for the rest of 2018 as far as quarterback depth is concerned because Kempt is back, and he has plenty of experience.

But behind Kempt are two freshmen, Re-al Mitchell and Devon Moore, and few would blame them for following Noland out the door with Purdy grabbing the leadership role.

Campbell had plenty of good thing to say about Mitchell on Tuesday, a sign that he might already be the third option behind center.

"Re-al's the interesting guy, because Re-al has really improved," Campbell said. "A really talented football player, and a guy that will help the team sooner rather than later."