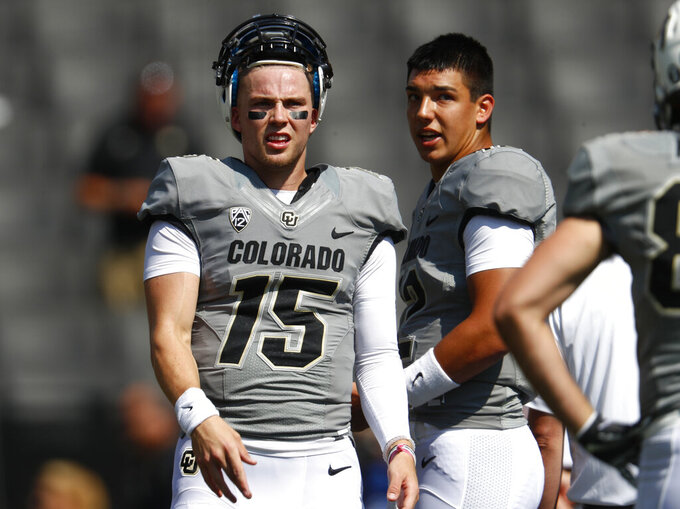 FILE—Colorado quarterbacks Sam Noyer, front, and Steven Montez in the first half of an NCAA college football game Saturday, Sept. 9, 2017, in Boulder, Colo. Noyer, who left the university, has returned to Colorado and may be the team's first-string quarterback because of a call from the new coaching staff. (AP Photo/David Zalubowski, File)

Coach Karl Dorrell, who helped talk Noyer into returning to Boulder and competing for the QB job after he’d entered the graduate transfer portal last December, said it was a “very, very, very close competition" and that Lytle will get some snaps under center himself in 2020.

“Sam got the nod, but we are really, really impressed with what Tyler has done this camp and ... he's going to get a chance to play some," Dorrell said.

Noyer will start the Buffaloes’ opener against UCLA on Nov. 7, when the Pac-12 opens a season delayed by the COVID-19 pandemic.

“That was the challenge: we had three weeks to make a decision without any spring practice," Dorrell said, adding, “Sam, we felt that he just operationally is just a little bit better at this point but just barely, barely better.”

Noyer said he celebrated “for a couple of hours” after being named the starter but his focus quickly returned to the Bruins' upcoming visit to Folsom Field.

Noyer has logged time at quarterback for the Buffaloes, completing 21 of 41 passes for 179 yards and two interceptions in ’17 and ’18 as a backup.

In years past, Noyer was going against some heavyweights in Sefo Liufau (during Noyer’s redshirt season) and then Steven Montez. Liufau and Montez turned in prolific careers while at Colorado.

Last season, Noyer started fall camp as one of the backups behind Montez. But he and then-coach Mel Tucker decided his switch to safety would bolster that side of the ball.

Noyer ended up playing in 11 games, mainly on special teams. He took a total of 24 defensive snaps and recorded no stats.

He wanted another shot under center and figured he’d have to transfer to get that.

“I didn’t know I was going to be a Buff again, so there was a time where I didn’t think this was possible,” Noyer said. “But I’m just glad I made the decision to come back here and things worked out.