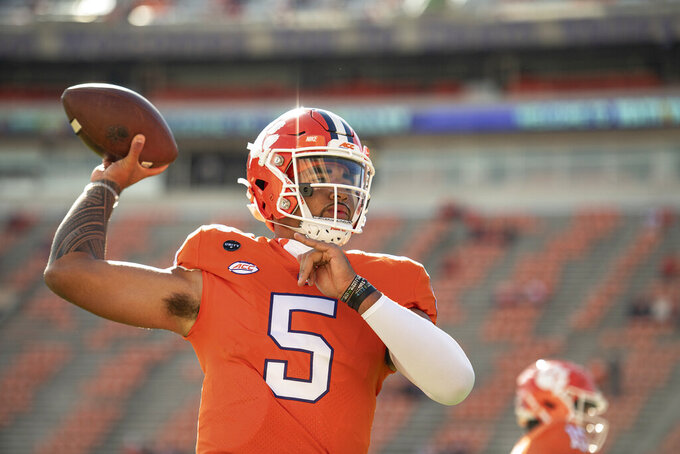 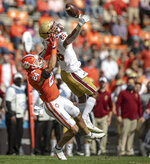 CLEMSON, S.C. (AP) — Freshman DJ Uiagalelei already made Clemson history by leading the biggest comeback in the history of Death Valley. He'll get the chance to make even more next week with Trevor Lawrence ruled out for the showdown with No 4 Notre Dame due to COVID-19.

Uiagalelei stepped in for Lawrence on Saturday and rallied the top-ranked Tigers to a 34-28 victory over Boston College after they fell behind by 18 points.

Rattled at facing the Fighting Irish? The kid from California sure doesn't sound like it.

“It's the same mindset that I had this week,” Uiagalelei said. “Start watching some film tomorrow to get ready for another game."

Smooth and calm, Uiagalelei looked ready-made for any challenge after leading Clemson back from 28-10 deficit, a rally that surpassed a 17-point come back from 35-18 down at home in a win over Virginia in 1966.

“I've been preparing for this ever since I got to Clemson,” he said.

Although, he and his teammates probably didn't anticipate trailing by double-digits late in the second quarter.

“Being down 18 is not a lot of points,” Uiagalelei said with his cool, California confidence.

“We all had complete confidence in ourselves that if we could execute, we'd get back in it,” he said.

Travis Etienne became the Atlantic Coast Conference's career rushing leader and his second TD put the Tigers (7-0, 6-0) ahead for good. A jarring week for Clemson ended with its 28th straight win over league competition, 10th straight over the Eagles and 27th in a row at home.

Clemson was missing several key players. Along with Lawrence, starting linebackers James Skalski and Mike Jones Jr. were out with injuries.

The Eagles (4-3, 3-3) pounced quickly, putting Clemson in a 28-10 hole in the second quarter with the virus-reduced crowd stunned to near silence.

“It's been a long time since we've been down like this,” he said. “We're fixing to find out what this team's made of.”

It's made of highly talented players ready for the moment like Uiagalelei, from Inland Empire near Los Angeles who showed why he was a five-star prospect coveted by every college power and the heir apparent once Lawrence leaves for the NFL.

Uiagalelei ran for a 30-yard TD on Clemson's opening third-quarter drive to begin the comeback, then threw an 8-yard scoring strike to Amari Rodgers that drew the Tigers to 28-26.

Etienne, Clemson's other Heisman contender, put the Tigers in front for good with a 17-yard touchdown run with 11:34 to go.

The Eagles got the ball back with 1:24 to. But Phil Jurkovec was called for intentional grounding in the end zone for a safety, a fitting end to a second-half shutout by the Clemson defense.

“LETS GO!!! So happy for this team. Great win. Miss being there more than anything. @DJUiagalelei did your thing proud of you,” Lawrence posted on Twitter shortly after the win.

Etienne also had seven catches for 140 yards. Cornell Powell had a game-high 11 receptions for 105 yards.

And all with Lawrence watching from in isolation. By missing next week, the earliest Lawrence would be back is at Florida State on Nov. 21. Clemson is off Nov. 14.

Swinney said Lawrence was in good spirits and spoke to the team Friday night via Zoom.

Boston College took advantage of the Clemson chaos early on with TDs on its first two series.

Phil Jurkovec found Zay Flowers for an 18-yard TD pass to put the Tigers behind for the first time all season. A short time later, it was David Bailey's 2-yard scoring run that put the Eagles ahead for good, 14-7.

It appeared Clemson would tie things again, driving to the BC 1. But the normally sure-handed Etienne fumbled the handoff from Uiagalelei, cornerback Brandon Sebastian picked it up and set off 97 yards for the return TD.

When Jurkovec hit C.J. Lewis for an 18-yard touchdown on the next series, Clemson trailed by 18 points.

Despite the loss, first-year Eagles coach Jeff Hafley was proud of his players belief and confidence they could compete with anyone. "We took it to the No. 1 team in the country," Hafley said.

Jurkovec, the Notre Dame transfer, completed 12 of 24 passes for 204 yards.

Boston College: The Eagles looked set to pull the upset of the college football season. Instead, they fell to 1-5 all-time against No. 1 teams and 2-32 in their history against teams ranking in the top five.

Clemson: The Tigers have escaped close calls the past two weeks. They were up just 27-21 on Syracuse here a week ago late in the third quarter before pulling away for a 47-21 win. Things appeared even more dire with the Tigers trailing 28-13 at halftime and minus so many critical players. Again, though, Clemson showed its resilience to remain undefeated.

Clemson offensive coordinator Tony Elliott said he asked offensive veterans like senior tailback Etienne and receiver Powell to help out their young quarterback, not just by making plays but showing positive body language. “Let's not put it all on the young guy," Elliott said.

Clemson makes its first trip to Notre Dame in 41 years.