Quarterman returns to Miami with a lofty personal goal 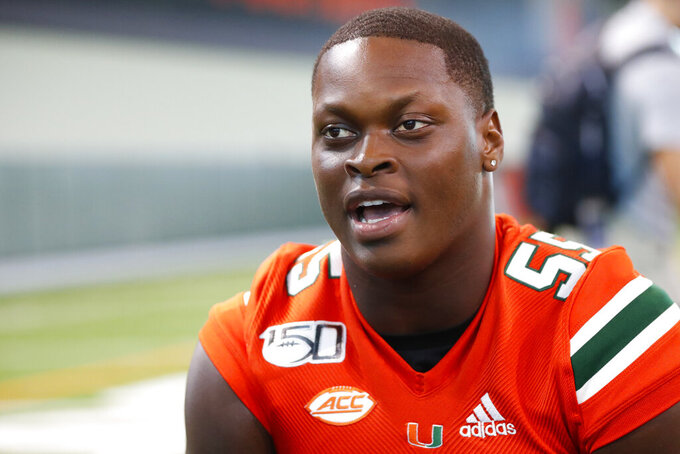 FILE - In this Aug. 13, 2019, file photo, Miami linebacker Shaquille Quarterman speaks to members of the media during the team's Media Day in Coral Gables, Fla. Quarterman thought about the NFL draft earlier this year, before deciding to return to Miami for one simple reason. The team's best linebacker feels like he hasn't left a big enough mark on the Hurricanes yet. (AP Photo/Wilfredo Lee, File) 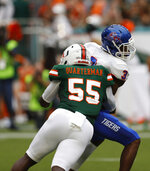 CORAL GABLES, Fla. (AP) — Shaquille Quarterman took a long look at leaving Miami for the NFL after his junior season, and it would not have been a shocker to see the Hurricanes' best linebacker turn pro.

He ultimately came back, seeking a picture-perfect ending.

"I think there's definitely a higher place for me," Quarterman said.

He means those words in a literal sense. At Miami, All-Americans get their picture on the high on the wall of the team's practice facility. Quarterman looks at that wall, sees the best players ever to take the field with the "U'' on the side of their helmet — and wonders what it'd be like to be part of that group.

So the NFL can wait one more year. There are team goals he will chase as well, of course, but Quarterman simply wasn't ready to leave the Hurricanes with just a good collegiate resume. He wants a great one, and his final season at Miami starts Saturday in Orlando when the unranked Hurricanes take on No. 8 Florida in the resumption of one of college football's best rivalries.

"It's huge," Quarterman said. "The rivalry started way before I was born. You've got people — very, very, very committed fans saying like, 'Hey, man, this is it right here. This is everything.' So you know that it's important. You would have to be blind and deaf to not know it's important. To bring that win home for this place, for this city, it would mean a lot."

The 6-foot-1, 235-pound Quarterman will be one of the leaders of a Miami defense that ranked fourth nationally last season and doesn't have plans to endure any significant dropoff in 2019. Graduation meant the secondary had to be rebuilt and the defensive line will have a new look, but Quarterman — along with Michael Pinckney and Zach McCloud — is back as a four-year starter at linebacker.

Quarterman has never missed a game. Saturday will be Miami's 40th contest since he arrived on campus, and he will have started them all. When Florida takes its first snap, Quarterman's starting streak will officially have tied current Miami assistant coach Mike Rumph for the fifth-longest in Hurricanes history.

Miami defensive coordinator Blake Baker said he presented Quarterman with two challenges: Make his teammates better, and understand everything about what the other 10 guys on the field are doing as well.

"I think he's done a really good job answering the bell with both of those things," Baker said.

Another concentration of Quarterman's in recent months: Being critical with himself.

His numbers in 2018 were outstanding — 14 tackles for loss and six sacks, stats that basically matched the output from his freshman and sophomore seasons combined. But Quarterman has been studying video of his mistakes like a missed angle here or a botched read there, and still kicks himself for dropping an interception against Duke last year in a game that Miami lost by a touchdown.

Miami coach Manny Diaz, who was Quarterman's defensive coordinator for the last three years, said he hopes the approach is rubbing off around the locker room.

"Part of my job is I can't put Shaq on the field in his fourth year with a bunch of guys that don't feel the same will to win as Shaq does," Diaz said. "That would break his heart and break my heart."

Quarterman has a chance this season to get his name all over the Miami record book. If the Hurricanes go to a bowl game and he plays in every contest, he'll finish no worse than tied for the school record in games played. He could set the school mark for most starts and most consecutive starts, and he has a shot at reaching the top 10 in school history for tackles.

All that is nice, but as far as individual accolades, that picture on the wall is what he wants most.