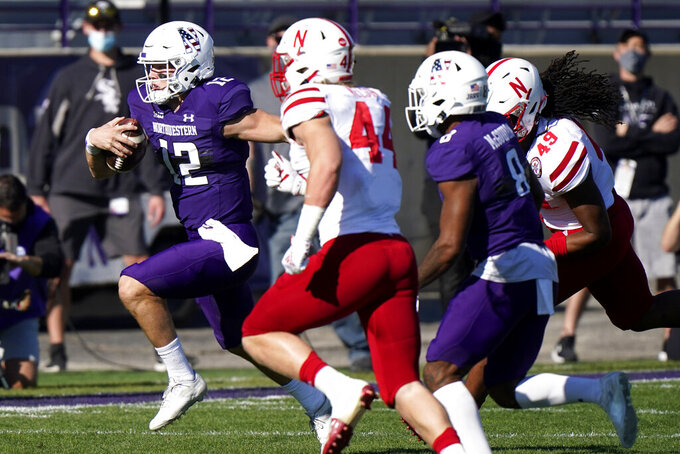 Northwestern quarterback Peyton Ramsey, left, runs with the ball against Nebraska during the first half of an NCAA college football game in Evanston, Ill., Saturday, Nov. 7, 2020. (AP Photo/Nam Y. Huh)

EVANSTON, Ill. (AP) — Peyton Ramsey heard Riley Lees screaming for the ball, then delivered a touchdown pass to give Northwestern breathing room on the way to another tight victory over Nebraska. But not before the Wildcats withstood a last-gasp drive by the Cornhuskers.

Ramsey shook off two interceptions to throw for two touchdowns in the second half, and Northwestern hung on to beat Nebraska 21-13 Saturday after Luke McCaffrey’s last-second pass to Wan’Dale Robinson in the end zone fell incomplete.

Seven of the previous nine meetings since Nebraska joined the Big Ten in 2011 were decided by seven points or fewer. Six were within a field goal. This was the fourth in a row to come down to the final play of regulation or go to overtime.

“Today was a winning-ugly game,” coach Pat Fitzgerald said. “We've got to get a lot better in a lot of ways. It starts with me. But we'll take it.”

Nebraska took over at its 8 with 2:14 remaining after Northwestern punted, and had a fourth down at the 14 when McCaffrey was unable to connect with Robinson. The Wildcats (3-0, 3-0 Big Ten) got the ball back with a second left and took a knee to cap their latest close game with the Cornhuskers (0-2, 0-2).

Ramsey threw a 2-yard touchdown to John Raine in the third and a 10-yarder to Riley Lees early in the fourth with his receiver screaming to get his attention. Lees made the catch and a neat spin move to avoid two defenders, then reached into the end zone to bump the lead to 21-13. Chris Bergin intercepted McCaffrey near the goal line with about six minutes remaining to keep the lead at eight.

“(Lees) was actually yelling at me before I threw the ball and clapping his hands, telling me he was open,” Ramsey said. “He made a great play, caught the ball, got vertical and then reached out, got in the end zone. Awesome play.”

The Wildcats matched their win total from last season, when they went 3-9. They remained unbeaten in their best start since they won their first five games in 2015, and they improved to 3-0 in Big Ten play for the first time since 2000.

Ramsey, a graduate transfer from Indiana, settled down after getting intercepted twice by redshirt freshman Myles Farmer in the second quarter. He completed 16 of 27 passes for 169 yards.

Drake Anderson ran for 89, including a 41-yard touchdown on Northwestern’s first possession. And the Wildcats continued to roll along after blowing out Maryland and then rallying to win at Iowa last week.

The Cornhuskers came up short in their first game since they opened with a blowout loss at Ohio State two weeks ago. They had an unexpected bye after Wisconsin canceled a game in Lincoln because of a COVID-19 outbreak within the Badgers’ program.

“It’s inexcusable we only had 13 points in that game,” coach Scott Frost said. “I give a ton of credit to them. They’re always good on defense. I’ve got to make sure guys are in good position to score points. Discipline in our program starts with me and the coaches to make sure we have it.”

Farmer had his first two career interceptions for Nebraska.

Adrian Martinez threw for just 125 yards and ran for 102. He was intercepted in the end zone by Brandon Joseph late in the third.

McCaffrey came in near the end of the quarter and was 12 of 16 for 93 yards. And Frost wouldn't say how the quarterback rotation will play out after this.

“I don’t want to comment on that other than to say I think we have two really good players,” he said. “I feel for Adrian. That’s a tough position to be in. He’s poured his heart and soul into this. I’m comfortable with both of them in a game. I thought we just needed a spark and gave Luke a shot. He deserved it."

Nebraska: The Cornhuskers had just one touchdown and two field goals to show for six trips to the red zone.

Northwestern: The Wildcats continue to bounce back after going from playing in the Big Ten championship game to finishing last in the West last season.