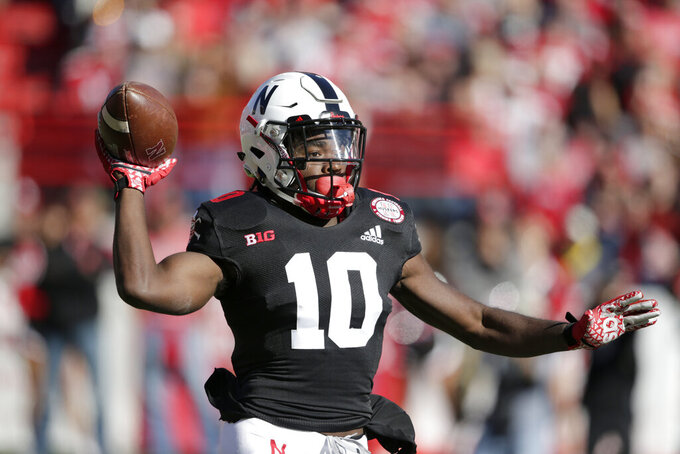 LINCOLN, Neb. (AP) — Indiana players started celebrating before the clock struck zeroes, and as they headed to the locker room they continued to whoop and holler.

Yes, they are. It's not even November, and the Hoosiers have achieved the six wins needed to play in a bowl for the first time since 2016.

Leading the way in Saturday's 38-31 win over Nebraska was Peyton Ramsey, the starting quarterback for two years before getting beat out in the preseason. Starting for the third time this season in place of the injured Michael Penix Jr., Ramsey passed for a career-high 351 yards and two touchdowns.

"Being so far from home, being our first time here at Nebraska, it was awesome," Ramsey said. "It was a fun deal and we're going to celebrate it."

The Hoosiers certainly did.

"You should have seen us in the locker room after the game," said Whop Philyor, who caught 14 passes for 178 yards. "We were going crazy. It was chaos."

"It feels pretty stinking good to stand here and answer your questions after a big-time road win," Allen told reporters. "This is a big-time win. It changes a lot for our program."

Nebraska (4-4, 2-3) lost its second straight, and second-year coach Scott Frost lamented two turnovers that were converted into touchdowns, breakdowns in pass defense, a missed field goal and poor punt that gave Indiana a short field for a scoring drive.

"It's frustrating," Frost said. "We've got a lot of guys on this team who really care. We have some guys who are tough and dedicated enough. We don't have enough of them yet.

Philyor caught 14 balls in a game for the second time this season as the Hoosiers riddled Nebraska with crossing routes and a variety of other short passes.

"It's so inspiring to watch," Ramsey said. "He's a tough little dude. He's a fun guy to throw the ball to. You know you're going to get yards after the catch."

Ramsey, who completed 27 of 40 passes, put the Hoosiers up 31-24 with a 2-yarder to tight end Matt Bjorson on the last play of the third quarter. Kanawai Noa fumbled on the Huskers' next possession, and the Hoosiers went 57 yards for a two-touchdown lead with 12 minutes left.

Nebraska started Noah Vedral in place of the injured Adrian Martinez, and he was helped off the field in the second quarter with an undisclosed injury.

Freshman Luke McCaffrey entered and, on his second series, led a six-play, 74-yard touchdown drive for a 21-16 halftime lead.

David Ellis's 1-yard run put the Hoosiers up 24-21, and it was tied after Barret Pickering's 30-yard field goal for Nebraska.

The Hoosiers went ahead again on Bjorson's TD and, after Noa fumbled, Philyor converted a fourth-and-7 before Stevie Scott ran 9 yards for a two-touchdown lead.

McCaffrey led a quick scoring drive that Wan'Dale Robinson finished with a 4-yard run to pull the Huskers within seven. Vedral returned for the Huskers' final drive, but they turned the ball over on downs near midfield and the Hoosiers ran out the clock.

Indiana: There really is no drop-off with Ramsey at quarterback. He played one of his best games for the Hoosiers. The defense came in ranked 18th nationally, but it struggles when going against better-than-average offenses.

Nebraska: The Huskers' defense had no answer for Ramsey, and though they were able to generate 514 total yards, there are major concerns about the health of the quarterbacks.

Nebraska pulled off a couple trick plays. Spielman took a pitch on an end around and threw to Vedral along the sideline for 22 yards on the first play of their second series. Later, on a fourth-and-1, Vedral looked at the sideline as if he were waiting for instructions when Cam Jurgents sent a direct snap to running back Dedrick Mills, who picked up 2 yards.

Indiana's Logan Justus missed an extra point for the first time this season and is 62 for 64 in his career.