Rare ranked showdown for No. 3 Tennessee, No. 19 Kentucky 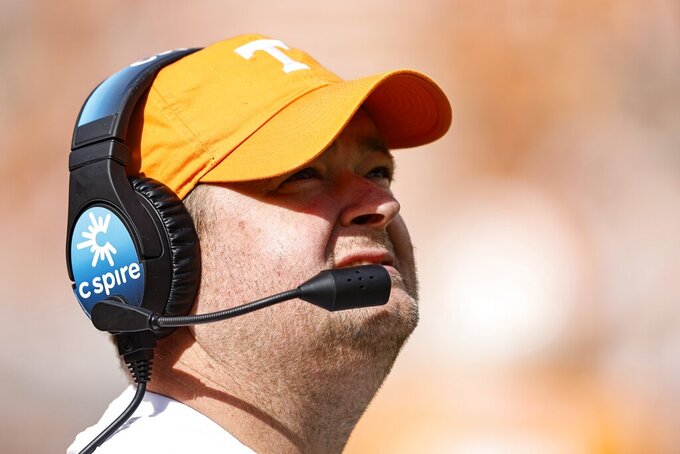 KNOXVILLE, Tenn. (AP) — More than just bragging rights will be on the line Saturday night between Tennessee and Kentucky.

It will simply be the biggest game between these border rivals in 71 years.

Neither Tennessee nor Kentucky have been ranked at the same time for this game since 1951, and Saturday night will be only the third time overall. The Volunteers beat Kentucky in both 1950 and 1951, with both ranked, and Tennessee won a national championship each of those seasons.

“Our players got to have a real sense of urgency,” Tennessee coach Josh Heupel said.

The Volunteers are off to their best start since 1998, when they last won the national championship. They are coming off a 65-24 homecoming rout of UT Martin. Heupel knows the challenge of keeping the Vols thinking Wildcats and not Bulldogs.

Heupel said last year’s win at No. 18 Kentucky — his first over a ranked team with the Vols — was pivotal in his program’s development.

“I don’t believe there was a psychological hurdle that our program had to get over,” he said. “It was more a preparation/performance hurdle.”

Kentucky is coming off an open date. Quarterback Will Levis sat out with a foot injury when the Wildcats were upset by South Carolina, but returned to lead Kentucky to a 27-17 win over then-No. 16 Mississippi State on Oct. 15.

Both Kentucky and Tennessee got starting quarterbacks through the transfer portal before last season. Levis came to Kentucky from Penn State, while Hendon Hooker joined Tennessee from Virginia Tech.

With Levis and running back Chris Rodriguez, Jr., the Wildcats have a ball-control attack that grinds out yards and chews up the clock ranking No. 83 in the country averaging 373.7 yards.

That is pretty much the antithesis of Tennessee’s philosophy. The Vols lead the country in both total offense with 571.7 yards and points with 50.1 a game.

The Tennessee quarterback just set the program record with a TD pass in his 19th straight game. Hooker now is 13-5 as a starter with the Vols. He ranks fifth nationally and leads the SEC averaging 344 yards total offense.

Hooker is averaging 299 yards passing per game, which is 16th nationally and second in the SEC. He's completing 70.6% of his passes with 18 TD passes and only one interception on 194 passing attempts.

Kentucky's defense ranks ninth in the country holding opponents to just 16.4 points and 14th in total yards giving up just 295.4. The Wildcats know they'll be tested. Stoops noted the Vols have 21 plays for 40 yards or more and 49 for 20 yards or longer in a good scheme that's very unique to Tennessee.

“You might be anticipating one thing, but with the space that they have, they are creating some deep shots and the way Hendon is throwing the deep ball very efficient,” Stoops said. "He’s very, very accurate on the deep pass.”

Kentucky has not allowed an opponent to score more than 24 points since Tennessee scored 45 in its win over the Wildcats last season in Lexington.

Cedric Tillman set several receiving records at Tennessee last season but hasn’t played since Sept. 17. He sustained a high ankle sprain against Akron. Surgery was supposed to hurry the healing process. Tillman has been recuperating five weeks and may be available for Saturday’s game.

If Tillman isn't back, the Vols have Jalin Hyatt. He leads the nation with eight receptions of at least 40 yards or more, which is more than 11 SEC teams have all season. He also leads the country with 12 TD catches, one off the school record. He ranks fifth nationally averaging 109.9 yards receiving per game.