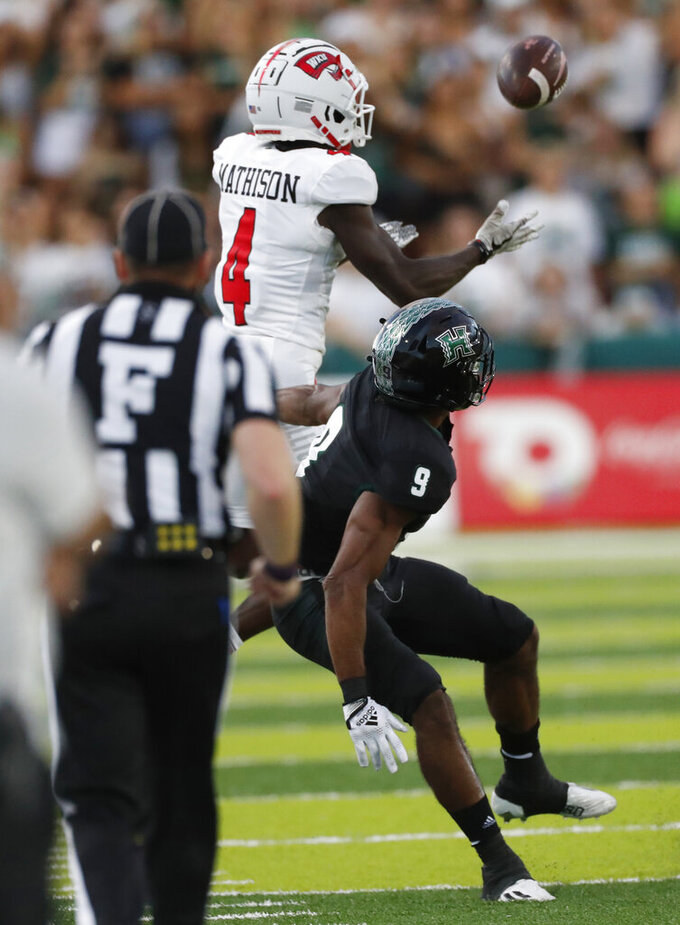 HONOLULU (AP) — Austin Reed threw three touchdown passes and ran for a score and Western Kentucky rolled to a 49-17 victory over Hawaii on Saturday.

Reed capped a 10-play, 68-yard drive with a 5-yard TD toss to Dalvin Smith to put the Hilltoppers (2-0) up 7-3 early in the second quarter. On Hawaii's ensuing possession, Juwon Jones picked off one of four interceptions thrown by Brayden Schager and returned it 38 yards for a score and a 14-3 lead.

Western Kentucky capped off a 21-point second quarter with Reed's 47-yard scoring strike to Joshua Simon and the Hilltoppers led by 11 at halftime.

WKU upped its lead to 28-10 after three quarters when Reed hit Jaylen Hall for a 17-yard score. Kye Robichaux pushed the Hilltoppers' advantage to 35-10 with a 7-yard TD run early in the final period. Reed and Davion Ervin-Poindexter had short scoring runs after that.

Reed completed 22 of 31 passes for 271 yards with one interception.

Schager finished with 230 yards on 22-of-33 passing for the Rainbow Warriors (0-2). Backup QB Joey Yellen completed 4 of 11 passes for 36 yards with a pick. Dedrick Parson and Nasjzae Bryant-Lelei had short TD runs.

By Brian Mahoney an hour ago
By Gary B. Graves 4 hrs ago
By Dave Campbell 5 hrs ago
8 hrs ago
By Raul Flores 8 hrs ago