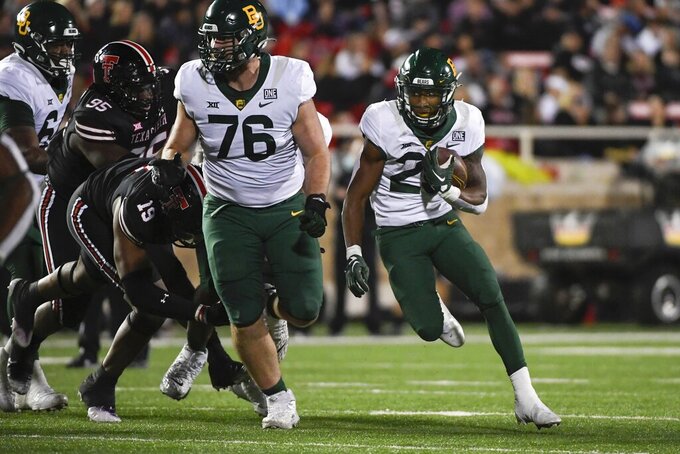 Baylor running back Richard Reese, right, runs the ball against Texas Tech during the second half of an NCAA college football game Saturday, Oct. 29, 2022, in Lubbock, Texas. (AP Photo/Justin Rex)

Second among NCAA freshmen in yards rushing coming in, Reese had 53 of the 75 yards on a drive to his tiebreaking 1-yard TD in the second quarter as Baylor (5-3, 3-2 Big 12) dominated time of possession.

Baylor ended a 10-game losing streak in Lubbock while handing Texas Tech (4-4, 2-3) its first home loss under coach Joey McGuire, the lifelong Texan who was a Baylor assistant the past five seasons.

On a night Texas Tech celebrated star Kansas City quarterback Patrick Mahomes as its eighth ring of honor member, the Red Raiders ended up throwing five interceptions while trying all of their top three QBs.

“I think offensively what Tech was doing really stresses you,” Baylor coach Dave Aranda said. “There’s a fair amount of creativity with their tempo. I credit the players because they went out and really had a chip on their shoulder and played with an edge.”

Tyler Shough entered trailing 31-17 in the fourth quarter for the first time since injuring his shoulder as the opening day starter, and McCarty stepped in front of his first pass and ran untouched 18 yards down the sideline.

Freshman Behren Morton was 4 of 17 with two interceptions and three sacks after a pick in the first minute of the second half set up Blake Shapen's 9-yard TD pass to Hal Presley for a 24-3 Baylor lead.

Morton responded with two touchdowns, including his 8-yard run on fourth-and-7 to get Texas Tech within 24-17 after a fumble by Reese.

The Red Raiders were up to four interceptions — three from Morton and another from Donovan Smith on one of his two passes when McGuire turned to Shough, who the coach said would be available next week.

“Got to look at the film and see what those guys did good,” McGuire said. “It was kind of one of those deals where we got the point late in the game, we were really trying to make sure we didn’t come out with somebody banged up or hurt.”

Reese's third TD was a 1-yard plunge to cap an 11-play, 75-yard drive after the Red Raiders had pulled within seven.

“It was good to see,” Aranda said. “I thought the offensive line really took it upon themselves to impose their will and to really be physical, and our running backs really worked on playing behind their pads and churning their legs and all of it.”

Morton finished 11 of 33 for 152 yards and three interceptions. Shapen was much more efficient, going 19 of 30 for 211 yards with a TD and no interceptions for the defending Big 12 champions.

Baylor: With a 21-point lead down to seven, Reese had a 16-yard run on third-and-3 to spark the TD drive that ended with his 1-yard score. Just one of Reese's first nine TDs was on the road coming in. He was coming off a 186-yard outing with two TDs at home against Kansas.

Texas Tech: The Red Raiders ran just 27 plays in the first half and finished with 73 after coming in leading the FBS at nearly 90 plays per game.

Baylor: At Oklahoma next Saturday.

Texas Tech: At undefeated No. 7 TCU next Saturday.