Return or fair catch? That's the question on kicks in 2018 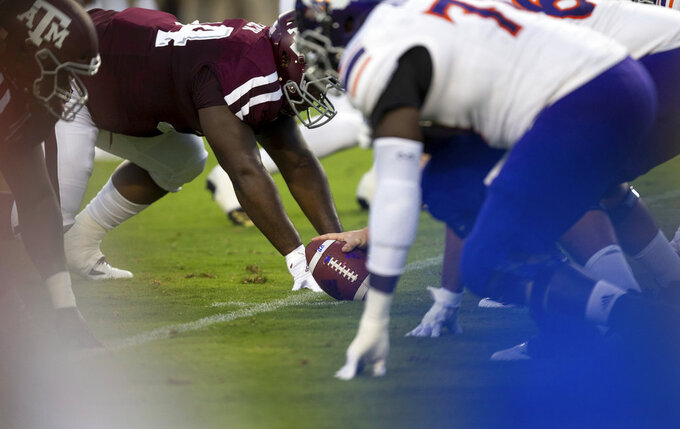 Texas A&M defenders line up against Northwestern State with the ball spotted at the 25-yard line after a fair catch was called on the opening kickoff of an NCAA college football game Thursday, Aug. 30, 2018, in College Station, Texas. Under a new rule, if a fair catch is made on a kick inside the 25, it’s a touchback. A fair catch beyond the 25 is marked at that spot, like on a punt. A muffed fair catch also is marked at the spot regardless of which team recovers. The purpose is to increase the number of touchbacks on kickoffs as a way to enhance player safety. Research has shown kick returns are among the most dangerous plays. (AP Photo/Sam Craft)

After Hawaii's Tristin Kamaka made a fair catch on a kickoff at his 13-yard line and the ball was moved up to the 25, Colorado State players pointed fingers and waved arms to indicate the spot was off by 12 yards, and the home fans howled.
The reaction presented a teachable moment for the referee, who flipped on his microphone and announced: "By the new rule, a fair catch on a kick places the ball at the 25-yard line. First down."
Yes, it's going to take time to get used to the NCAA's new kickoff rule.
If a fair catch is made on a kick inside the 25, it's a touchback and it's marked at the 25. A fair catch beyond the 25 is marked at that spot, like on a punt. A muffed fair catch also is marked at the spot regardless of which team recovers.
The purpose is to increase the number of touchbacks on kickoffs to enhance player safety. Research has shown kick returns are among the most dangerous plays.
The new rule came into play only twice on 50 kickoffs in four games involving Football Bowl Subdivision teams last Saturday. On the other 48 kicks, there were 30 returns and 18 balls that went into the end zone for conventional touchbacks.
Coaches say they'll take the rule into account in special teams game planning. A team that struggles returning kicks might play it safe, take a fair catch and start with decent field position. The ability of the opposing coverage unit might factor in the fair catch-or-return decision. The directional kick might not be as prevalent because returners who get pinned deep along the sideline can take a fair catch to get out of trouble.
"The thing that's going to be interesting is how often people now are going to use squib kicks?" Penn State coach James Franklin said. "How often is that going to be the way to make people return the ball? I'm talking about like a deep squib where now, you're almost forcing people (to return). They can't fair catch. And now, do you have a better chance of pinning them inside the 10 through a squib kick?"
Mississippi led the Southeastern Conference in kick returns last year, and Jaylen Jones expects Texas Tech to use squib kicks on Saturday to eliminate the fair catch and also make it difficult for the Rebels to set up returns.
"I hope so, actually, so we can make them pay," Jones said.
Johnny Rodgers, the 1972 Heisman Trophy winner for Nebraska and the college game's best return man of his time, fears the kick return and the potential for a game-breaking 100-yard runback could be phased out of the game.
"I just know it's exciting," said Rodgers, who gives the Jet Award to the nation's top return man each year. "Football, there's a risk factor. Take all the daring and excitement out of the game, it's going to be pretty mundane here pretty soon."
Texas coach Tom Herman said the rule makes sense because its intent is to make the game safer.
"I do feel like there's still going to be a lot of collisions on that play," Herman said. "Just because a guy (calls for a fair catch) does not mean our kickoff team is going to stop. Because if he muffs it, we better be there to fall on the dang thing. So there is still going to be a heck load of collisions on that team."
Massachusetts and Hawaii were the only teams to take fair catches on kicks last week. Kamaka's fair catch for Hawaii came after Colorado State pulled within 40-34 with 4:42 left. The Rainbow Warriors drove for a field goal and won 43-34.
Hawaii special teams coordinator Michael Ghobrial liked having the fair catch as an option in a situation where CSU might have tried an onside kick. The Rams kicked deep.
"Instead of sending out my kickoff return team, I sent out my hands team to ensure if they did go onside we would be able to recover it," Ghobrial said. "We had a deep returner there on our hands team, just as everybody does, but we weren't going to have great blocking in terms of setting up a return if it was kicked deep. Utilizing the fair catch rule, if you catch it anywhere inside the 25, it gets moved up to the 25. For us it was a chance to get good field position, No. 1. No. 2, it was a very smart decision in terms of not having a chance for the kickoff defense to potentially cause a fumble on our returner."
Ghobrial said he didn't read much into the fair catch being used only twice on 50 kickoffs last week. He said the sample was too small and that teams' strengths, weaknesses and tendencies will emerge.
"It's going to be something that is going to be eye-opening as we start to game plan other opponents," Ghobrial said. "It's going to be more prevalent as the season progresses."
___
AP Sports Writers David Brandt and Jim Vertuno and freelance writer Jordan Wolf contributed to this report.
___
More AP college football: https://apnews.com/tag/Collegefootball and https://twitter.com/AP_Top25