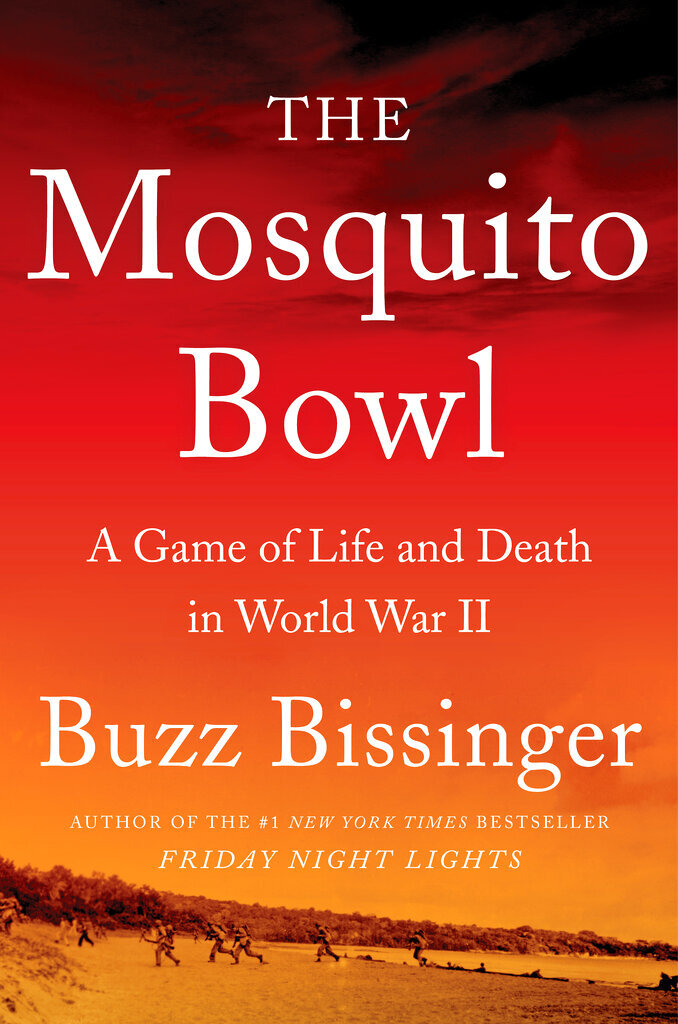 This book cover image released by Harper shows "The Mosquito Bowl: A Game of Life and Death in World War II" by Buzz Bissinger. (Harper via AP)

“The Mosquito Bowl: A Game of Life and Death in World War II,” by Buzz Bissinger (Harper)

U.S. Marines training for the invasion of the Japanese island of Okinawa didn't know they would face the bloodiest fighting in the Pacific theater of World War II. The nearly three-month battle in summer 1945 would cost the Marine Corps, the Army and the Navy nearly 13,000 dead and three times as many wounded.

The Japanese command accepted its 60,000 to 100,000 combat deaths, and the loss of as much as a third of the island's civilian population, to demonstrate their resistance to having the Japanese mainland invaded.

And who were the Marines training for Okinawa? Author Buzz Bissinger, whose bestselling nonfiction book “Friday Nights Lights” explored lives shaped by high school football, taps a footnote in Marine Corps history for “The Mosquito Bowl: A Game of Life and Death in World War II,” another story about football and much, much more.

As fate would have it — and fate often takes a hand in wartime — dozens of Marines in the 6th Division training on the south Pacific island of Guadalcanal had played college football, many of them all-American or all-conference players. An offhand observation that the division's 4th and 29th regiments could each field an all-star team led to the so-called Mosquito Bowl on the insect-infested island on Christmas Eve 1944.

Marine brass and hundreds of other Leathernecks — many had placed bets on the outcome — gathered around a makeshift football field to watch the game and get a taste of home. The event even gained some radio airplay in the Pacific and media attention in the U.S. Sixty-five men with college football pedigrees played in the Mosquito Bowl, and Bissinger's compelling narrative closely follows the lives of five of them:

— George Murphy, team captain at Notre Dame and the son of a clerk in South Bend, Indiana.

— Tony Butkovich, an All-American at Purdue and one of seven sons of a Croatian coal miner in central Illinois.

— Robert Bauman, a tackle and punter at Wisconsin. As a kid he had gone to work in the onion fields near his hometown south of Chicago after his father died.

— David Schreiner, an All-American end at Wisconsin whose German immigrant grandfather had established a prosperous family in Lancaster.

— John McLaughry, a blocking back at Brown University, its heavyweight boxing champion and a talented artist with a seemingly limitless future.

All were in their 20s when they fought at Okinawa, an experience that would change them just as would hundreds of thousands of other Americans as well as their families and friends. While plenty of other able-bodied men didn't let the war disrupt their lives, these men postponed offers to play in the NFL, begin careers, marry or start their own families to join the fight.

In exploring the hearts and souls of those who risked everything for their country, Bissinger's book defines some of the qualities that make America great — then, now and forever. And such greatness characterizes exceptional men and women around the world. He also showcases the horrors of war and the blunders that cost lives on the battlefield.

In the book’s only misstep, the Mosquito Bowl itself takes up less than a page and doesn’t justify the catchy title. Few details of the game apparently survived — the score, an anticlimactic 0-0. If the title is merely a marketing hook, it does a disservice to the subject at hand. This story doesn’t need a gimmick to sell it.

But then Bissinger's primary subject was never the Mosquito Bowl itself or even football. Young men going off to war is a familiar story, of course, but one can hope that heroism and sacrifice never go out of fashion or that devotion to duty becomes cliché.

Douglass K. Daniel is the author of “Anne Bancroft: A Life” (University Press of Kentucky).