Rhule successor at Baylor will start in different situation 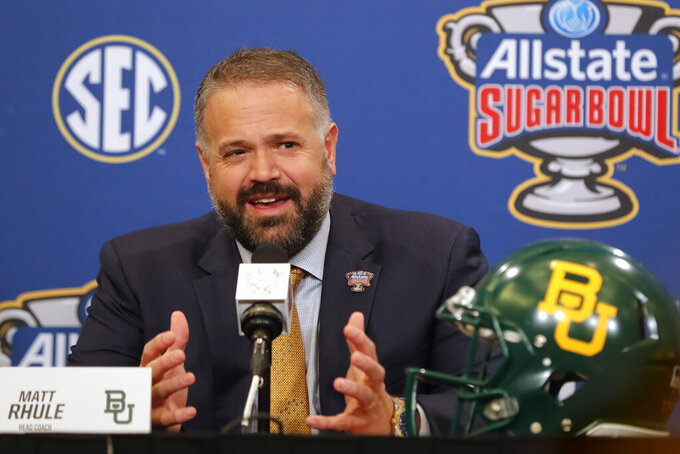 Baylor's next coach will take over a better and much different situation than Matt Rhule did just over three years ago.

The Big 12 team, which went from 11 losses to 11 wins two seasons later, is now searching for that coach after Rhule was hired Tuesday by the NFL's Carolina Panthers on Tuesday.

“Matt’s time with Baylor marks one of the greatest turnarounds in college football history,” Baylor athletic director Mack Rhoades said. “Our football program’s success this year is evidence that we are headed in the right direction."

The No. 8 Bears wrapped up an 11-3 season last week in the Sugar Bowl. They were 11-1 in the regular season before losing to Oklahoma in the Big 12 championship game and falling to SEC runner-up Georgia on New Year's Day.

“We are especially appreciative of the efforts he has made in positively shaping the lives of our football student-athletes, who have excelled on the field, in the classroom and in the community,” Baylor President Linda Livingstone said. “Coach Rhule certainly leaves the program in a better place than when he arrived.”

Baylor issued those statements expressing gratitude to Rhule around the same time the Panthers formally made their announcement. Rhoades, who had been at Baylor only a few months before he hired Rhule, said a national search was already underway for the new coach.

Rhule arrived in Waco, Texas, to a depleted roster in the aftermath of a sprawling sexual assault scandal that led to two-time Big 12 champion coach Art Briles getting fired in May 2016. The Bears started 6-0 the following fall under interim coach Jim Grobe, then lost 17 of their next 19 games. That included a six-game losing streak before a Cactus Bowl victory to finish Grobe's time, and a 1-11 record in Rhule's debut season.

Baylor started 9-0 this season before a 34-31 home loss to Oklahoma after jumping out to a 28-3 lead early in the second quarter. The Bears then had wins over Texas and Kansas before playing the Sooners again the Big 12 title game.

“While our hope was that Matt would be our coach for many years to come, we knew there was a possibility that the NFL would come calling," Rhoades said.

Baylor in September had extended Rhule's contract through the 2027 season, and ESPN reported that Carolina is paying a $6 million buyout that was part of that deal. Rhule was less than three seasons into his original seven-year contract when he got the extension.

Rhule told ESPN Central Texas radio that it was difficult to leave Baylor, but that “I felt like my work was done and it was time to try and turn around another program.”

He went to Baylor from Temple, where he was 2-10 his first season before a 6-6 record and then back-to-back 10-win seasons.

Rhoades said he planned no comments on prospective candidates until he was ready to introduce the next coach.

Several Baylor players on social media Tuesday made a pitch for associate head coach and defensive backs coach Joey McGuire to be promoted to the top job. McGuire, never a college coach before, was part of Rhule's initial staff at Baylor after three Texas state championships as head coach at Cedar Hill High School.

By Mark Long 2 minutes ago
By Stephen Hawkins 4 minutes ago
an hour ago
By Hank Kurz Jr. 2 hrs ago
By Ralph D. Russo 2 hrs ago