Richardson's encore with No. 13 Florida comes at woeful USF 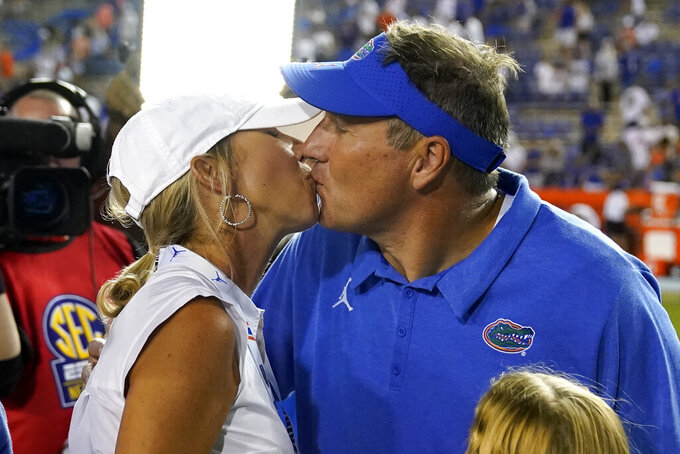 By the time No. 13 Florida’s season opener was over, Anthony Richardson had leaped one defender, thrown another to the ground and looked so special with the ball in his hands that he might as well have had a cape dangling from his No. 15 jersey.

Richardson raised eyebrows and expectations. He created hope and healthy debate. He left teammates, coaches and fans wondering what else the Gainesville native and backup quarterback could do.

The Gators (1-0) will travel to Tampa to face the woeful Bulls (0-1) in what’s expected to be packed Raymond James Stadium, and all eyes will be on Richardson. The 6-foot-4, 224-pound redshirt freshman was dazzling in what essentially was his college debut.

Sure, he got a little mop-up duty in four games as a freshman. But it was nowhere near the playing time he saw against Florida Atlantic.

Now, the biggest question is what’s next for him and the Gators, who are 28 1/2-point favorites according to FanDuel Sportsbook. Coach Dan Mullen insists there’s no quarterback controversy: Emory Jones is the starter despite a rough opener, and Richardson is a change-of-pace backup who’s still working to grasp every facet of the offense.

“He made some great plays,” Mullen said, comparing the situation to freshman Tim Tebow playing behind senior Chris Leak in 2006. “Huge enthusiasm for Tim Tebow and he played about six, seven plays a game. But those six, seven plays are a lot of enthusiasm. So yeah, I’ve seen it before and understand it.”

One difference: Leak was Florida’s entrenched starter and played well in the role.

Jones completed 17 of 27 passes for 113 yards, with a touchdown and two interceptions. He also ran for 74 yards. But he lacked the big plays that Richardson delivered when he entered the game on the third series and took over in the fourth quarter.

Richardson ran seven times for 160 yards – a big chunk of Florida’s nation-leading 400 yards rushing – and went untouched around the right side for a 73-yard score. He also tossed aside one would-be tackler near the sideline and jumped over another while running full speed. He completed 3 of 8 passes for 40 yards.

Florida defensive tackle Gervon Dexter said facing Richardson is “like tackling a defensive end running the ball” and called his performance “kind of like expected.” They played basketball together in the sixth grade, and Dexter witnessed Richardson’s raw skill up close.

“He’s just always just been super athletic, crazy hops, all of that,” Dexter said. “Just seeing him get better each year, even last year, he got better and learned, so that was kind of expected.”

The Bulls will need to play better to have a chance to slow down either quarterback. They gave up 293 yards rushing and four touchdowns in a 45-0 loss at North Carolina State last week and have lost nine of 10 under second-year coach Jeff Scott.

“Both of their quarterbacks are tremendous,” Scott said. “Those guys, anytime that they pull the ball, they have a chance to score at any moment.”

Mullen goes for his 100th career victory, a milestone that only 173 men have reached in college football history. Of those, only 17 accomplished the feat in the powerhouse Southeastern Conference. Mullen is 99-55 in 13 years as a head coach, the first nine at Mississippi State.

“Yeah, that’s pretty cool,” Mullen said. “I haven’t really had time to reflect on it much because getting ready for the game. ... But I think that would be a cool milestone to get to 100 wins as an SEC coach.”

Florida defensive end Zach Carter grew up in Tampa and came oh-so-close to playing in Raymond James Stadium as a youngster. His little league team fell one victory short of making a championship game inside the NFL venue. So Carter is relishing this trip, which also is causing some angst.

Carter needs 40 tickets, so he’s been begging teammates for help to appease his mom, his family and his friends.

“Teammates think I’m crazy asking for so many tickets,” said Carter, a senior who notched a career-high three sacks in the opener.

The Gators have won three straight at Raymond James, all in the Outback Bowl. They beat Iowa twice, in 2005 and 2016, and knocked off Penn State in 2010. The last time Florida played a regular-season game in Tampa was in 1989 against Mississippi State, a 21-0 victory.