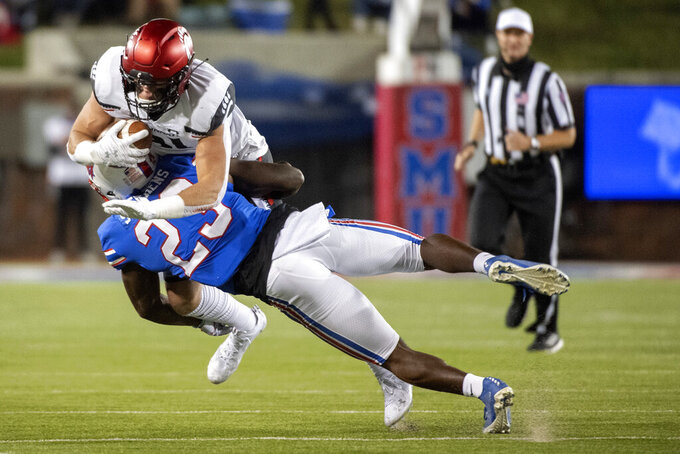 Cincinnati tight end Josh Whyle is taken down by SMU defensive back Brandon Stephens (23) during the first half of an NCAA college football game Saturday, Oct. 24, 2020, in Dallas. (AP Photo/Jeffrey McWhorter)

DALLAS (AP) — Desmond Ridder had an upset stomach that briefly sent him to the injury tent. On the field, the Cincinnati quarterback was nothing but trouble for SMU.

Ridder ran for 179 yards on only eight carries and scored three touchdowns, including a 91-yarder in the fourth quarter. He also threw for 126 yards and a score to help No. 9 Cincinnati beat No. 16 SMU 42-13 on Saturday night in a showdown of unbeaten teams.

Cincinnati (4-0, 2-0 American Athletic Conference) played its first game since Oct. 3. The Bearcats had an open date the following weekend and then had their scheduled Oct. 17 home game against Tulsa moved to Dec. 5 because of positive COVID-19 cases at Cincinnati and the quarantining of athletes at the school.

“We see it every single day,” Cincinnati coach Luke Fickell said. “I was just waiting for some more people to be able to see it. He really showed what he is when it’s really tough. He does his best job when the heat is on.”

The 91-yard touchdown run down the left sideline, with no one ahead of him during the final 60 yards, gave Cincinnati a 35-13 lead with 4:26 to play and finally put away an SMU team that threatened to get back in the game earlier in the quarter.

“We just didn’t do routine things that we typically do to give us a chance to at least be in the game,” SMU coach Sonny Dykes said. “I bet you we dropped 10 balls. When you do that, it doesn’t give you a chance to be competitive in the ballgame.”

Gerrid Doaks applied the finishing touch on the Bearcats’ next possession with his 35-yard touchdown run with 2:03 left. Doaks ran for 105 yards on 20 carries, with another touchdown run of 1 yard.

Shane Buechele threw a 9-yard touchdown pass to Rashee Rice, and Chris Naggar kicked field goals of 26 and 22 yards for SMU (5-1, 2-1). The Mustangs fell short of opening with six straight wins for the second straight season.

The Mustangs went into the game ranked fourth in total offense among FBS teams but were controlled by a Cincinnati defense that entered ranked 12th in defense. Buechele was averaging 342 passing yards per game, fifth in the FBS, but was held to 216 yards and threw his first interception since the season opener.

SMU averaged 42.6 points per game, seventh in the FBS, and had been held to a lowof 30 before Cincinnati came to town. The Mustangs were 7 for 20 on third downs and allowed five sacks.

“It’s really hard against a really good defense to convert third-and-longs,” Buechele said. “We were in the game until the middle of the fourth quarter, and then they ran away with it.”

During SMU’s previous home game, stadium security personnel ordered the student seating area on the lawn behind the south end zone vacated because of the lack of adherence to safety protocol related to COVID-19. On Saturday night, most of the patrons seated on the lawn remained within newly lined boxed areas. There was one announcement early reminding those fans of the protocols.

Cincinnati: The Bearcats joined Houston and Tulsa with 2-0 records atop the conference. With Saturday’s loss by No. 8 Penn State, the Bearcats are in position to move up at least one spot in The Associated Press poll to match their highest ranking of the season.

SMU: Top receiver Reggie Roberson Jr. and No. 1 running back TJ McDaniel were lost for the season to injury in the Oct. 3 win against Memphis. The Mustangs were able to make up for their absences last week in a 37-34 overtime win at Tulane but not against the Bearcats.