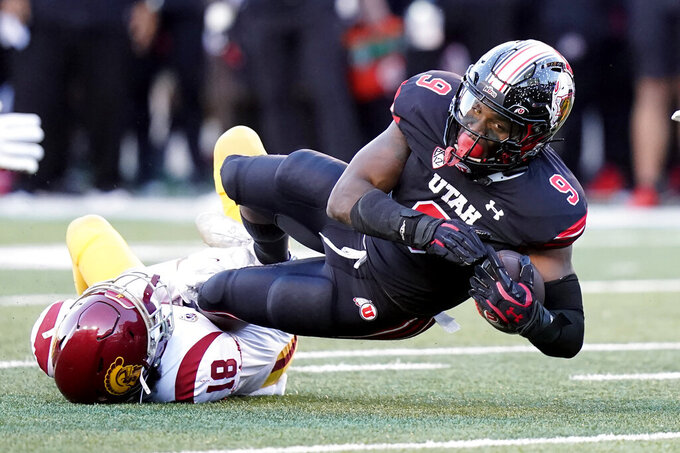 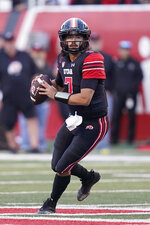 SALT LAKE CITY (AP) — Time was dwindling but the decision had already been made as Cameron Rising drove Utah down the field against previously unbeaten Southern California.

“We were going to keep the ball in Cam’s hands,” Utes coach Kyle Whittingham said. “And if we score and time is close to expiring, we were going for 2, no question.”

Rising threw for 415 yards, ran for three touchdowns and scampered up the middle for a go-ahead two-point conversion with 48 seconds left in No. 20 Utah's 43-42 victory over the seventh-ranked Trojans on Saturday night.

The Utes dedicated the game to Ty Jordan and Aaron Lowe, former players who died within a year of each other. In the locker room after the game, the team presented the game ball to the fallen players’ mothers in a poignant moment. Both players wore jersey number 22.

“We wanted to make sure we represented 22 well,” Rising said as the Utes had hand-painted portraits of Jordan and Lowe on their black helmets.

Even when the Utes were down two touchdowns, Rising said his teammates never doubted.

“We had an unwavering belief,” Rising said. “Having Ty and Aaron on your helmet made it that much easier to go.”

Rising rushed a yard for a touchdown on fourth down to set up the deciding conversion.

“Cam Rising is a competitor, warrior, you name it. He’s a champion,” Whittingham said.

Caleb Williams threw for 381 yards and five touchdowns for Southern California (6-1, 4-1 Pac-12). Utah (5-2, 3-1) held the Trojans on their last-ditch drive, handing them their first loss as a record crowd of 53,609 shook Rice-Eccles Stadium and then flooded the field.

The Utes needed every one of Rising’s big plays with his legs and his arm during his career night. Rising, who was once committed to current USC coach Lincoln Riley when he was at Oklahoma, became the first Utah QB to throw for 400 yards since Brian Johnson had 417 against San Diego State in 2005.

Dalton Kincaid had 16 catches for 234 yards, the most for a Ute since Carl Harry had 255 yards in 1988 and the most catches and yards receiving for a Utah tight end.

Southern Cal's Mario Williams had four catches for 145 yards and Jordan Addison had seven receptions for 106 yards before an ankle injury took him out of the game.

Against an all-out blitz, Williams connected with Michael Jackson III, who stepped through a tackle for a 20-yard touchdown with 6:15 to play for a 42-35 lead. It was Jackson’s first catch of the season.

The Trojans scored on their first three possessions of the game. The assault continued throughout the game but the Utah defense secured the victory after Rising’s heroics in the fourth quarter.

“Their team is full of explosive players … but they have to play for four quarters and that showed the resiliency of our team,” Utah linebacker Karene Reid said of the final stop.

“That certainly had to be one of the most exciting games in Rice-Eccles history. What a performance by our football and it’s a really good team we beat, very talented and the quarterback’s tremendous,” Whittingham said.

Addison, the 2021 Biletnikoff Award winner at Pittsburgh as the nation’s top receiver, had seven catches for 106 yards but hurt his ankle on a reverse in the third quarter.

Brant Kuithe was Utah’s focal point in the passing game but is out for the season with a knee injury. Kincaid stepped in with his historic game and the Utah offense didn’t miss a beat, even when the running game faltered.

“He’s an absolute athlete, one of the best tight ends in the country and tough as nails,” Whittingham said.

Rising said this game was a result of an instant connection when they both transferred to Utah in 2020 and the trust has grown each year.

“He’s an easy guy to throw the ball to. When he touches the ball that often, he make plays, he extends them. He’s a player,” Rising said.

Southern California: The Trojans were prolific on offense, but the defense couldn’t stop Rising, especially when it counted. Key penalties often stymied the Trojans when they had opportunities to take a commanding lead.

Utah: Rising willed the Utes to the win but the defense was gashed by the Trojans. Utah defenders often took poor angles against USC’s speed. Utah turned almost exclusively to the passing game as the running game was stuffed, except for Rising’s power runs.

Utah should rise but the Trojans shouldn’t fall far after the two teams went toe-to-toe for 60 minutes.

Southern California: At Arizona on Oct. 29.

Utah: At Washington State on Oct. 27.