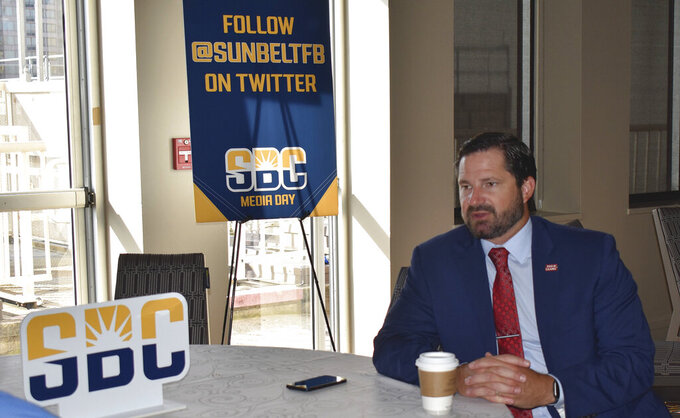 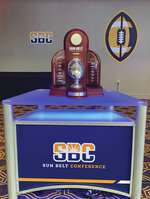 There are four new members, including Marshall, increasing the league to 14 teams. The league features one of the most efficient quarterbacks in the NCAA back for another year in Coastal Carolina's Grayson McCall and ex-Southern Cal coach Clay Helton will try and revive Georgia Southern's usually powerful program.

And with the uncertainty in college football involving issues such as realignment, NIL and the transfer portal, “I'm absolutely sure of one thing,” Commissioner Keith Gill said this summer. “The Sun Belt is rising.”

If the resurgence continues again this year, the packed Sun Belt East Division, where Appalachian State, Coastal Carolina and newcomer Marshall should battle for the top spot.

Coach Billy Napier had Louisiana the cream of the West Division with last year's league title, four division titles and three bowl wins since 2018. But Napier left to revive Florida, leaving his Rajun' Cajun assistant — and former Louisiana quarterback — Michael Desormeaux to take over the program.

Desormeaux has had a front-row seat to Louisiana's rise and is grateful for the chance to continue things “at a place, where going on seven years now where I've been able to be a part of building it,” he said. "It means everything to me.”

Depending how the season unfolds, Louisiana could finally have that league championship game matchup with Coastal Carolina that was called off in 2020 due to COVID-19 in the Chanticleers' program.

Much like Louisiana, Coastal has surged the past few seasons and spent much of 2020 and 2021 in the Top 25.

That coincides with McCall's time running the offense. He's passed for 53 touchdowns with just six interceptions in 491 attempts the past two years. The fourth-year junior completed nearly 69% of his throws in 2020, then upped that to 73% last fall.

McCall set an NCAA record with a passer efficiency rating of 207.6 last season. Winter questions swirled around whether McCall would bolt the Chants for a Power Five opportunity, but instead he stuck around with his announcement that he was returning.

McCall, however, believes Coastal has the playmakers to keep his team on top.

“When I first came here, my goal was to turn this place around and turn it into a championship program,” he said. “Obviously, we've come a long way, but the job's not finished yet.”

Along with Marshall, the Sun Belt added James Madison, Old Dominion and Southern Miss. The Thundering Herd may have the most impact on the East Division race with running back Rasheen Ali, who gained 1,401 yards and 23 touchdowns last year. Coastal Carolina faces Marshall and Appalachian State, winners of the East in five of the past six seasons, in consecutive weeks that will be pivotal to the conference race.

Clay Helton at Georgia Southern is the most high-profile new coach in the Sun Belt. Helton was let go by Southern Cal early last season and jumped right back into the game with the Eagles program. Georgia Southern was 3-9 last season. Other newcomers are Desormeaux at Louisiana and Jon Sumrall at Troy.

Troy linebacker Carlton Martial was the pick for defensive player of the year after making 113 tackles or more the past three seasons. He had 127 stops last fall and will be a sixth-year senior in his final college football season. Coastal defensive end Josiah Stewart led the conference with 12.5 sacks as a freshman. Marshall tailback Ali looks like the Sun Belt's top offensive player not named McCall.

Sun Belt Commissioner Keith Gill was signed to a contract extension through June 2030, a clear sign member presidents believe Gill's the clear choice to navigate issues like expansion, name image and likeness and the transfer portal.

In the East, Appalachian State must go to Coastal Carolina on Nov. 3, then to Marshall on Nov. 12. Coastal heads to Marshall on Oct. 29, the week before the Chants play the Mountaineers. The West looks to come down to Louisiana hosting Troy, which changed divisions in conference expansion, on Nov. 5.

Sign up for the AP’s college football newsletter: https://bit.ly/3pqZVaF